In the 1963 film, Steve McQueen, Richard Attenborough, Charles Bronson, James Coburn and sundry others dug and burrowed and escaped from a prisoner of war camp and made their great escape, with McQueen jumping on a motorbike, eluding half of the Third Reich and racing to freedom through the bucolic hills of Austria or Switzerland. Julie Andrews had yet to climb any of the mountains.

Thirty or so years later in 1992 the Australian State of Victoria started its own countryside extravaganza – the Grape Escape – with scores of vineyards north of Melbourne offering wine tastings, gourmet food and music and family attractions for the hordes who wanted to escape the city and enjoy the good life in the country.

On the other side of the country, the Margaret River wine region of Western Australia enjoys its annual Gourmet Escape. In 2016 about 19,000 people visited the event. This year there were 19,000 + 1 (me) who called in to the Leeuwin Estate vineyard or other venues that hosted yummo delights.

Margaret River is a pretty little town about 300 kilometres south from Perth – yes – a long way to go for a glass of wine. The road from Perth passes through unremarkable countryside of flat rolling plains, scrubby little trees, a few cows, a few sheep, one or two “hidden” police speed cameras, and bypasses attractive the small towns of Busselton and Bunbury.

There was remarkably little signage showing the way to the fun – in fact, I saw just one sign for the Gourmet Escape, located just two kilometres from the venue, but to find that sign I had to drive several kilometres blindly south, hoping for a sign showing where to turn off the main road. 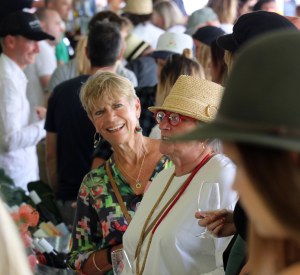 The Gourmet Village at Leeuwin sprawled through nicely landscaped grounds, and was packed with people strolling, sipping, nibbling and having fun sampling the goodies offered by a dozen or so restaurants. Feeling hungry? Perhaps you’d like to try the slow-cooked wagin duck in soft blue corn tortillas, the Blackwood Valley organic grass-fed beef or the maple-roasted cauliflower bao with sriracha yoghurt.

I rather wished that there were gourmet dictionaries on hand to explain what some of the things we were eating actually were. Perhaps I am a culinary philistine but I do not know what pulled mutton chalupa is, nor do I know whether I should eat, wear or spray with insecticide things called unsmacked cucumber, rice idlyappam or kohirabi herb slaw.

I don’t think there were meat pies and sauce offered anywhere.

But if there were no pies ‘n’ sauce, there were plenty of beers to sample. In the Battle of the Breweries, visitors could enjoy offerings by Blue Mile Brewery and Black Brewing, Cheeky Monkey Brewing, Colonial Brewing and Eagle Bay Brewing Companies.

If wine be the food of love, drink on!

The Gourmet Escape is primarily about wines and so the Leeuwin Estate wines were offered in their permanent tasting facility, while others had smaller booths scattered throughout the grounds: Paul Nelson Wines, Ferngrove & Killerby Wines, Sandalford Wines, Flametree Wines, Jarvis Estate Winery, Hay Shed Hill Wines, Preveli Wines, Xanadu Wines, Brookland Valley Estate, and of course Vasse Felix, the first vineyard and winery established in the Margaret River wine region. I had a glass of their Classic Dry Red which paired quite well with the Margaret River brie, pork rillettes and olives from Linley Valley Pork.

There were even more wines, cocktails, and boutique distilleries’ whiskies, gins and “bootleg” spirits. Visitors could join cookery classes, gin-making schools, queue to have celebrity chefs sign copies of their recipe books, buy Bodziak specialist cooking knives or slabs of local timbers at Slab N Burl Hardwoods to use as chopping blocks or to convert into exotic dining tables.

Coffee, Apernol (I found this exotic-looking fizzy orange citric refreshing drink earlier this year in Croatia), beef jerky, honey, gelato and nougat were all there when visitors got tired of wine, beer or gin.

The festival was all about food and drink – and as today’s television viewers around the world crave a never-ending banquet of celebrity chefs and restaurant makeovers and special offers of mini-ovens with – YES! There’s more! – a set of steak knives for the first 28965 orders – there were plenty of local and international kitchen divas cooking for the masses or busy being famous. No – Paris Hilton was not there.

Or if she was I did not see or hear her.

Matt Okine is a well-known Australian television comedian and cooking personality who appeared on the main stage, along with Cornish Jack Stein and “world surfing legend Taj Burrow” who presented “the best of ‘after-surf food’ paired with brews from Honest Ale.” When I was a lot younger, the best food after a day on the beach and in the surf was fish and chips wrapped in newspaper, topped off with a malted milk drink. Times change.

Further afield, but still part of the splendid festival, were special banquets at other vineyards, the O Solo Mio Italian long-table luncheon in an olive grove and a gourmet barbecue on Castle Rock Beach. For oenophiles there were chances to sample endless chardonnays or cabernets at the Cape Mentelle and Cullen Wines vineyards.

The Gourmet Escape was great fun with such a huge range of things to eat and drink all in the one place, but I think I preferred Victoria’s Grape Escape as visitors (with a designated driver, of course) meandered from vineyard to vineyard, tasting different wines, seeing different scenery, and trying the nibbles offered by each venue.

And of course, the Third Reich was nowhere to be seen.