Perth, Western Australia’s capital city, is one of the world’s most isolated places.

Yes – it is a long way to Tipperary – but everything is relative.

Forget Vladivostok and Ulaan Baator – these places probably have 7-11 convenience stores on every street corner and Uber taxi services to the next town and the next pizza joint.

Perth’s nearest city with more than 100,000 inhabitants is Adelaide, almost 2100 km away. By plane, Jakarta is over 3000 km away and Sydney is about 3300 km and several time zones away. If you travel on the superb Indian Pacific train from Perth to Sydney the journey will take four days and three nights and cover 4352 kilometres.

Western Australia covers about 2.5 million square kilometres – or about double the combined areas of Texas, England and France – and most of it is desert with a few kangaroos hopping here and there, and a few politically incorrect “blackboys” (grass trees – see image at left) thrusting their spears into magpie-crowded skies.

So why does anyone go to Perth?

Well – yes – all of these … and for many more reasons.

Perth has just two million people scattered over an area of about 5000 square kilometres, compared to the almost nine million poor souls squished into London’s tiny 1500 km2. Today’s average traffic speed in central London is about nine miles per hour. In Charles Dickens’ time – with horse-drawn carriages, slops being dropped from upper-storey balconies and Oliver Twist picking a pocket or two – the average speed was about 30 mph.

A week or so ago I was able to drive the twenty or so kilometres from Denzil’s lovely AirBnB apartment to the splendid North Swanbourne nudist beach in just under thirty minutes.

And I did not have to dodge any slops-spilling harridans on the way.

One city but many villages

Perth, like London, is a city of many villages.

Subiaco is an edgy artistic area with art galleries and the lovely little Subiaco Arts Centre where I enjoyed Amanda Muggleton’s vibrant portrayal of Maria Callas in Masterclass. The suburb’s leafy streets shelter numerous eating places (I had a superb Thai beef salad at one of them) and designer boutiques for those hunting for an outfit that may set tomorrow’s fashion trends on fire.

South of the Swan River – anywhere else in the world the area would be called So-Swa – is the leafy South Perth suburb where tree-lined avenues offer breathing space to elegant and expensive apartment buildings and the 1835 Old Mill … and a rather bewildering complex of one-way streets and freeways that caused me to loop the loop several times before finding a way to get across that bloody river.

Downtown Perth is really quite a mixed bag.

Parts of Perth are dying as WA’s fabulous mining boom has gone BOOM! … and the vast fortunes that were to be made by mining are slowly drooping into saddened sink holes. The vainglorious glazed towers are still there … but there are also numerous signs offering for sale whole floors of office blocks. However, Elizabeth Quay is bustling: five or six giant blue and white cranes are tugging new apartments and hotel towers out of the river mud, new restaurants (including the Lucky Shag Bar and Restaurant – with not even a nod of acknowledgement to Austin Powers) are opening and there is even a mini-golf course available. What more could a multi-millionaire property developer wish for?

A walk along the lovely Adelaide Street as it becomes St George’s Terrace is perhaps an indicator of today’s Perth. 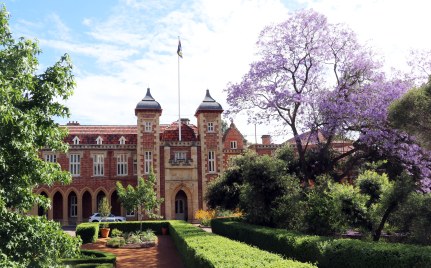 There are the big hotels operated by Hyatt, Novotel and Duxton; consulates for Malaysia and Indonesia; backpackers’ lodges; once-grand old Federation buildings that have been boarded up and have been covered in mindless graffiti; the Perth Concert Hall; the lovely 1863 Government House opposite St George’s Cathedral and its rather bizarre St George and the Dragon sculpture by Marcus Canning and Christian de Vietri; an old church or two – one of which now serves as the reception area for Quest Apartments – and then come all the towering follies of man’s lust – the BHP tower, the Rio Tinto tower, the ANZ tower …

And speaking of man’s desires …

Just north of the CBD is the Northbridge village, a slightly seedy, a slightly gay, a hugely multi-cultural part of the Perth mosaic.

Northbridge is home of the NIB stadium and the Perth Oval and Rugby League fixtures. It is home to many beautiful Federation houses, including homes proudly featuring the rainbow YES flag supporting Australia’s recent poll on same-sex marriages.

The UK is now facing the extremely challenging demands of leaving the EU, based on a narrow 52% vote supporting BREXIT. In Australia, the national poll on same-sex marriage recorded a strong 62% vote in support of changing current legislation.

Sex or no sex (“No sex thanks – we’re British”), there was one Northbridge house I particularly admired.

On my early-morning runs I passed many houses whose letterboxes demanded NO JUNK MAIL. One house in Bulwer Street, however, caught the battle against junk mail and balanced it with an altruism I applaud, as its mailbox sticker proclaimed:

I do hope they are now enjoying pizza supremes with all the extras.

Northbridge was also the setting for the annual Gay Pride Parade that happened while I was in Perth. 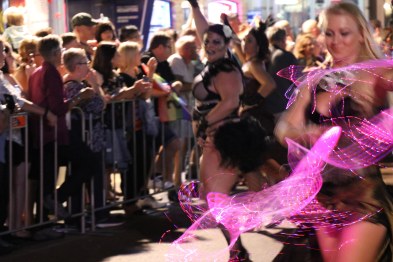 In Barcelona and Sydney, where I have seen other gay pride parades, the emphasis was on outrageously dressed drag queens, massively muscled young men in tiny swimming costumes, and elaborately decorated floats with people tossing out condoms, feathers or fans. In Perth it was all much more political, with church groups, universities, teachers’ organisations, WA companies such as ALCOA, and the Federal Police marching under the rainbow flag.

In other places the Gay Pride Parades seemed to be celebrations of what had been achieved in the LGBT world – in Perth it seems that it is still a battle worth fighting for.

Perhaps the fight for individual rights extends beyond sexuality. For many people, their car is valued more than their libido – and after all, was not the old Jaguar E-type the most phallic of all vehicles? Australians love personalising their cars’ or motorbikes’ number plates.

For me, a car is a tool for getting as effortlessly as possible from here to there. 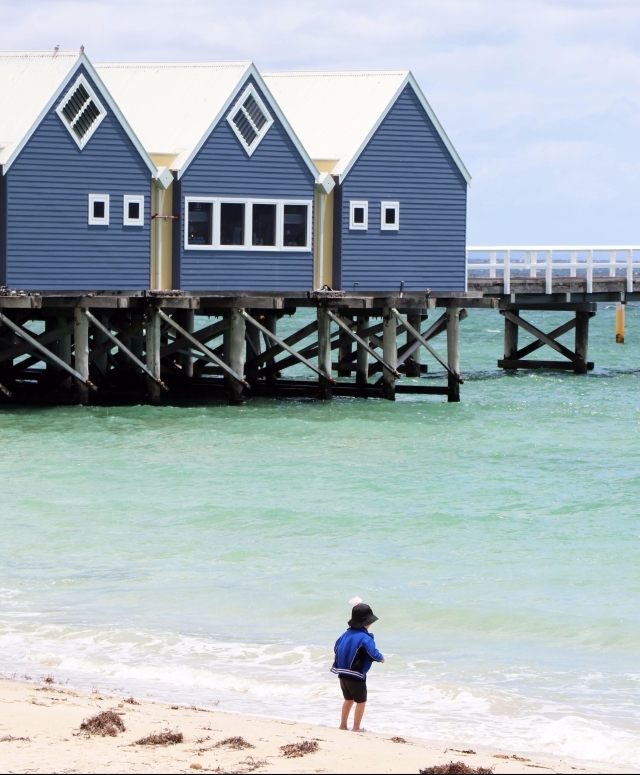 On this visit to Perth I hired a car (number plate One Gay Boy Zulu three for none – or 1GBZ 340) and was able to get around, travelling to Freemantle, Margaret River, Busselton and its wonderful jetty with a train to take people to the far end, Bunbury and the amazing township of Cowaramup.

Nope – nothing to do with cows, really – but named after a local bird called the Cowara. But who ever let the truth stand in the way of a good story? “Cowara” is the local aboriginal name for the purple crowned lorikeet.

I think if I were a good Hindu and believed in an afterlife, I rather think I’d like to come back as a splendidly regal purple-crowned lorikeet. Not sure how I would hold my orb and sceptre … but perhaps I could have some other uncrowned bird or some lesser mortal to do that for me. 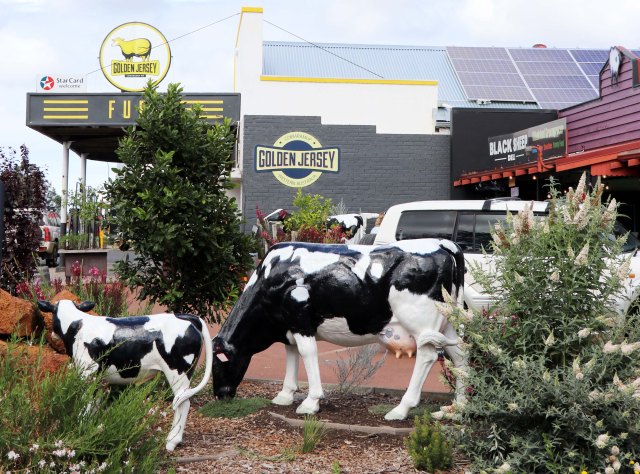 On the Eastern side of the vast Australian continent, many towns have adopted the cargo cult option of building a bigger than / better than / more vulgar than … something, in attempts to draw the tourist dollar. There are giant pineapples, giant bananas … and a bull or two with giant balls in Rockhampton. But to capitalise on the unlikely first few letters of the village name, Cowaramup near WA’s Margaret River, has Friesian cows.

Brass Friesians. Plaster Friesians. Plastic Friesians. Fibreglass Friesians and painted Friesians. There was the Mu Kau gift shop, and the Moo Devine B&B. There are almost more Friesians than people in this small town, and – yes – I stopped, walked and took photographs of a tiny settlement I would otherwise have driven through at great speed trying to find my way to Margaret River and its splendid Gourmet Escape.

But I was mootivated to stop to say hello to all the lovely cows.

Australia has many wine-growing regions – Pipers Brook in Tasmania, the Hunter Valley in NSW, the Barossa Valley in SA – and Margaret River in WA.

Scores of vineyards are found in this region, and the Leeuwin Estate Vineyard was host to the 2017 Gourmet Escape, a great fun place to visit with wines, gins, beers, whiskies, fine foods, celebrity chefs, jazz musicians, Hooray Henrys and tipsy topsies in high-heeled shoes teetering from booth to booth and glass to glass.

I felt that I needed a glass or two when I visited Fremantle – a lovely small city with an excellent weekend market and WA’s very busy ocean port.

As I walked along High Street I saw splotches of yellow paint on buildings and footpaths but could not discern any obvious patterns or reasoning behind the splodges until I asked my waitress at lunch what it was all about.

Well – seeing circles beats seeing stars, and so – off to the top of the 1831 Roundhouse jail to view Felice Varini’s Arcs d’Ellipses , a superb site-specific piece of installation / temporary artwork worthy, I feel, of inclusion with the best of Christo’s island and cliff-wrapping exploits.

Wrap me up, send me home and please be careful where you punch that date stamp.

If I wanted crowds I would perhaps head to Bangkok or Singapore. If I wanted desert quiet and clear skies perhaps I would go to the luxurious El Questro resort in the Kimberlies whose accommodation rates are in the region of “If you have to ask how much it is you can’t afford it” … but perhaps I could fling up a tent on a nudist beach somewhere, stroll off into the sunset, and hope – and pray – that KAY C and VIXEN do not find me.