I apologise for the bad old joke … but I am currently reading British actor Dirk Bogarde’s biography, in which there is something of a Chattanooga Choo Choo theme … and it seemed a good idea to start this story of trains with a chuckle.

I recently spent a couple of weeks in South Africa, and while many of my experiences were nothing to chuckle about, my time on local trains was wonderful. For years I had dreamed of travelling on the famed Blue Train from Cape Town to Pretoria. This train offers guests:

All jolly good stuff, and not a shoe-chewing cat in sight …

However, and forgetting the need to pack a dinner jacket and a black bow tie for the obligatory formal dinner, the cost for the overnight train leaving Cape Town at 0830 and getting into Pretoria at 1500 the next day is a (gulp) (Another sip of sherry, please Mabel) South African Rand (ZAR) 28,695 (about US$2100.00) if you opt for a spacious single compartment as I would have done … but did not do.

I chose the (almost) equal train, the Premier Classe Deluxe Sleeper train, (see: www.southafricanrailways.co.za) where we were not required to dress for dinner, but still had sparkling wine and snacks on arrival, a three-course lunch, a five-course dinner and a four-course breakfast, and where I had a private compartment in a carriage with showers, WCs and security guards. My motorised trek across the veldts cost ZAR 3195 (or about US$95.00) and was a superb way of seeing great chunks of South Africa, of sampling its food and wines, of redistributing a bit of wealth, and arriving only two hours late into Johannesburg.

We did not have the softly pleated lampshades or open-air observation decks of the Rovos Rail Pride of Africa train or the Blue Train and we missed out on the glass of sherry … but mile for mile and dollar for dollar I can really recommend the Premier Classe experience.

As there were only thirty or so guests on this whole fifteen- or sixteen-carriage train (including the Board Room carriage, a restaurant car, a smokers’ lounge, a non-smokers’ lounge and a dozen or so sleeper carriages), service could not have been more personal even had we had the stiffly starched Blue Train butlers to clip our cigars, turn down our beds, or to fondle our buttocks. (*)

(* With apologies – and thanks – to the Monty Python team)

On my train, tea was served in the lounge as staff took away heavy luggage to be placed in our compartments, and we were then shown to our rooms. Mine was next door to a former British Airways pilot whose surname was, coincidentally, the same as mine: diners at Table 13 that night were Mr Hall and Mr Hall.

Charles Dickens or Mark Twain or Agatha Christie would not have escaped serious criticism had any of them placed two characters with the same name in the same railway carriage, whether a murder occurred on the express or not. 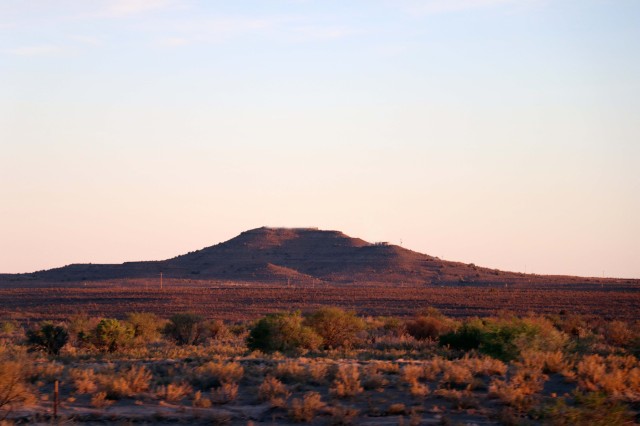 Travelling north, the superb mountains that make a strong statement in Cape Town are never too far away. We went through stark semi-arid countryside, past sad broken crumbling little kirks whose windows had all been ripped out, and tumble-down old dwellings whose rotting clay walls looked like old men’s teeth. As the day wore on and the sun started sinking, low scrubby salt bushes clinging desperately to the rocky soil cast shadows six times their height, and the mountains and stumpy eucalypt trees took on the same purple hues to be found in Albert Namatjira’s wonderful Australian watercolours.

Several years ago I helped some Tasmanian friends on their lovely little vineyard at Piper’s Brook, so it was interesting to see the different ways of training the vines in this part of Africa. In Tasmania we used a series of horizontal wires to teach those stubborn grapes to grow where we wanted them to go. In South Africa some vineyards use the same process, but in the places where the train lumbered through, many vineyards used a “Y” shaped series of wires to give the grapes greater exposure to the sun. This is a desperately dry area and most vineyards had huge circular, plastic-lined reservoirs of water, bore water, I suspect, pulled up from many metres beneath the scorched topsoil.

Along with hundreds of hectares of grapes there were almost as many of wheat, olives, sheep and solar panels … and lonely little farms many kilometres from any other human dwelling.

Just before I left Africa there was a huge protest march against farm murders.

It seems that these isolated little places are prime targets for violence, and the farmers who produce so much of the nation’s basic agricultural necessities are rightly calling on the government for addition protection against marauding opportunistic killers. I do not know what South Africa’s gun laws are, but suspect that if Donald Trump could poke his porcine fingers into the South African pie he would issue every farmer with a veritable arsenal of automatic weapons.

That is – if he did not build a huge wall around every farm.

At slow crossings through little towns young school kids jumped up and asked for “Sweets!” while older schoolboys looked on disdainfully – and one or two even tossed

rocks at the train.

But as I pulled open my bedroom curtains and saw a lush green landscape I wondered what had happened overnight.

The landscape was almost Swiss in appearance after the Australian deserts of the night before.

Soft rolling green hills and well-fenced pastures were dotted with jacaranda trees drooping with lavender blossoms, contented cows munched happily on grasses growing in the rich red alluvial soils, and rivers and streams had waters cascading down rocky pathways: it was indeed a brave new day and I felt that – perhaps – the people in this new part of the country could enjoy the same rewarding coming of age as the kid in the Australian 2009 film Bran Nue Dae.

I was to be proved sadly very wrong by the crime statistics I read in a local newspaper two days later.

… and after an interminable crawl through the suburbs, we got to Johannesburg some time later and only two hours late: not too bad for a 1400 km journey, and a wonderful journey it was.

The sleeper train arrives at Johannesburg’s Park Station and the excellent Gautrain to Pretoria leaves from the same station, just a short walk out the front door of one terminal and into the subway for the highly efficient, very modern, comfortable shuttle service to the nation’s administrative capital.

Just to keep you on your toes – YES! – questions will be asked at the end of this report – South Africa is very clever and has three capitals. Must be some sense in that.

Cape Town is the legislative capital because that is where the parliament sits or stands or struts its stuff. The President and his Cabinet work in Pretoria, and the Supreme Court is in Bloomfontein, the judicial capital.

Pretoria has wonderful avenues of flowering trees, some huge shopping malls, assorted “Must See” sights that I did not see, and an excellent Gautrain back to Johannesburg for my next great railway bazaar adventure – and thanks this time to Paul Theroux – my travel bug hero! 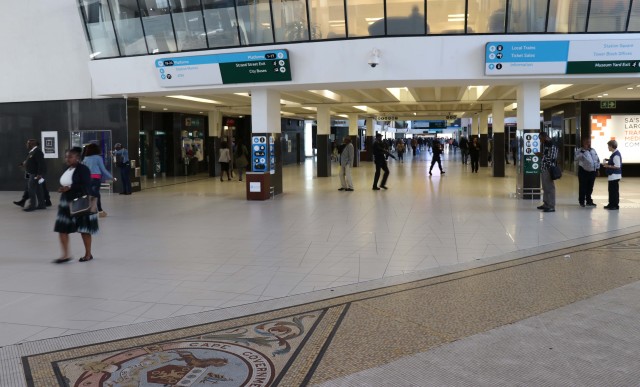 Each of the South African stations I visited was clean and organised and busy and crowded … but none of them was as bogglingly chaotic as New Delhi station or Tokyo’s Ikebukuro Station and its 910 million travellers each year. Despite my fear and incomprehension and ignorance, I headed through crowds into what I perceived as unfriendly streets to return – unscathed – a couple of hours later.

A couple of hours later …

And so all twelve of us followed gold-toothed Mike down a passage or two, down an escalator or two, along a platform or two until we found our Premier Classe carriages. As there were so few of us, the PC carriages hat had been linked up to a regular express train.

The cabins were as comfortable as the other train from Cape Town, there were champagne and nibbles to settle us down, and the restaurant and lounge cars were as comfortable as expected. There was, however, a noisy group of South African women who spoke at volumes usually reserved for Americans on mobile telephones (“Yes – I am now on the train and we will …”) and two small children whose Afrikaans adoptive mothers were giving them a travel treat:

Beside the railway line

This time there was no murder on the Durban Express, but I am looking forward to the new Kenneth Branagh film Murder on the Orient Express, in which Branagh stars as Hercule Poirot. I would quite happily have slaughtered those two kids who ran up and down the train and the South African quartet of very noisy women.

Well – it was not quite the fastest train I have been on – but it was comfortable enough and Gold-toothed Mike and Miss Togo offered coffee and cakes in the lounge at 11.30 – two and a half hours after we were scheduled to arrive in Durban:

I forget when we finally arrived … about four hours late … but there was still time for me to get to the rugby stadium to watch the Grand Final of the Currie Cup.

I have had faster train journeys and slower ones. 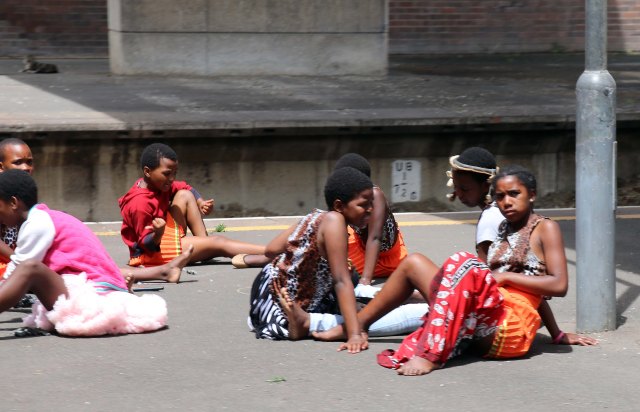 Waiting for the train, Brerea Station

The year I started teaching I travelled on Queensland Railways through a cyclone to get to Cairns and it was a bit of a toss-up whether the wind would blow the train off the tracks or if the poorly maintained QR rails would do it for me. In India I got on a train to go to Agra and the Taj Mahal but found I was on the wrong train and travelling in the wrong direction. In France I miss-timed a journey to Montpelier from my rented cottage and leaped onto the TGV to Paris just as the doors were sliding shut … and in many other places at many other times I have had great or wonderful or perplexing or superb train journeys – but my many hours on South African railways will always be among my favourite memories.

Forget the crime and the travel difficulties in South Africa – just hop on a slow express from somewhere to somewhere else.

One thought on “Slow Express to Durban”