I had decided that I had an ideal title for this story about my visit to Goa, even before I got there, and based on nothing more than preconceived ideas and misunderstandings and general pig ignorance.

I knew – or thought I knew – that it was a Portuguese enclave surrounded by the might of India and that it offered a lifestyle not to be found elsewhere, and where the Roman Catholic Church and soft Portuguese-murmuring maidens made their mark in an otherwise Hindu country.

In my mind’s eye, “Goa” was a long beach fringed by coconut palm huts and restaurants and massage places and Bob Marley bars serving strong drinks and soft drugs. The beaches were populated by naked or semi-naked hippies with dreadlocks, and hibiscus or frangipani flowers in their hair.

If “Goa” was ever that blearily-imagined Nirvana, then indeed it is Gone! But I suspect it was never quite all that and that the Goa of 2017 is still something of a very special paradise or Eden or Nirvana and a place worth visiting and spending time eating lotus blossoms, sucking in the smoke from grilled chicken on roadside stalls, and using discretely placed sarongs and towels and bathing suits to save the public eye from any naked bodies …

I went to India this time primarily to attend a three-day education fair in New Delhi, an event that was valuable, amusing and entertaining on different levels, and an event at which I found myself, for some quite unknown reason, as a member of a learned panel discussing how the education system in Finland can and should be a model for educators world-wide.

Delhi in a Second

… and that is Delhi for you!

The eyes of an instant expert. In a ninety-minute taxi ride.

I have visited the city three or four times and love its size and its energy and its history and weep for its poverty and the huge class distinctions between the “Haves” and the “Have Nots”. There is – apparently – a superb new underground air-conditioned efficient clean new Metro system that was being built when I was last in Delhi, but I did not see it or use it.

Another ninety-minute taxi ride awaited me on arrival in Goa.

I had finally done some Internet searching and found that there is more than one beach and that the characters of North Goa and South Goa are quite different, and that there are party beaches (Vagator and Calanganto) and quiet family beaches and historical ruins and churches and forts and markets and temples and museums … and beachside resorts.

It was indeed a Portuguese enclave for many years but in 1961 Indian troops “invaded” the state and there was martial law for almost six months before the locals voted to be an “autonomous, federally administered territory”. A bit like Canberra and the Australian Capital Territory or Washington DC, perhaps? But in 1987 the giant maw of India finally gobbled it up and now it is India’s smallest state by size and the country’s richest state.

I chose the tiny Mamagoa Resort – a simple but absolutely delightful place offering just four rooms in three beachside cabins, with an open-air vegetarian restaurant (no roof and no walls and no floor) two steps from the kilometres-long sandy beaches of Northern Goa, in the tiny village of Morjim, about thirty kilometres north of the State capital of Panaji or Panjim, depending on whether you are speaking Hindi or Konkani … or possibly the other way around.

The resort has no name – anywhere. My driver stopped at the edge of the road.

And so he hoisted my bags on his shoulders, I took other bits and we staggered through a gap in a bamboo fence and down twenty or thirty steps to a sandy garden full of coconut trees and frangipani trees and travellers’ palms, where we were welcomed by Suraj, the Manager:

But there were sun beds by the beach and sofas and hammocks and day beds and armchairs and a tented sala under the trees, and the breakfasts were huge and healthy and delicious, and there were dozens of nearby resorts to feed the hungry traveller at sunset.

As I was there at the end of the season – with the heavy rains of the monsoon anticipated almost daily and nearby resorts closing up daily and wrapping their cabins in blue plastic sheeting against the coming rains – the beaches were almost deserted, apart from the friendly and welcoming beach dogs. I counted almost forty of them one morning during my early-morning jog along the beach.

There were just enough people around to stop any ad hoc naked sunbathing (although two shapely young women did go topless), but I was able to swim out into the surf a hundred metres or so, remove the bathers, and float bloatedly along – an elderly Michelin man, perhaps – airing and sunning the parts that Guinness does not otherwise reach.

Scattered along the beaches were the surf life saving stations, with men clad in the (now) traditional red and yellow outfits made popular by the US television series starring Pamela Anderson and, I think, David Hasselhoff. These lifesavers squatted on plastic chairs beneath rough woven coconut palm fronds supported by wobbly poles shoved into the sand, and held tight to their Baywatch red plastic buoys. Their surfboards lay in the sand by the shelters – and lay there overnight and all day the next day, too – and were never used. In Australia a surfboard lying on an unattended beach would have a life span of about fifteen seconds.

A little north of the Mamagoa is a small fishing village and, until ten years ago, that is all there was in this area. The boats hauled up on the beach have proud little flags on them imploring “Our Lady of Health Vailankanni” to “Pray for Us”.

Our Lady of Health may have also been in action following a big beach wedding that happened at a hotel a little south from my resort.

I had watched as workers erected a temporary stage with soaring sails above flower-clad columns, a white and gilt (plastic) double throne installed, hordes of blue and white lamps strung overhead and a dozen or so flaming torches arranged flanking the stage.

In the morning after, the stage was gone, the lamps were gone, and the torches were gone … but the tiny plastic bride and groom dolls from the top tier of the wedding cake were left lying sideways in the sand, with broken beer bottles and wine glasses nearby.

I do hope Our Lady stepped in, so to speak, to ensure that walkers and joggers on the beach did not end up with lacerated post-nuptial feet.

The resort was La Cabana Beach and Spa, and its restaurant was by the beach, and welcomed me in a swimsuit for lunch one day, although a staff member rushed up to me to stop me from washing off beach sand from my feet in the hotel pool:

It was a fair enough request … and I had some tasty and bony grilled mackerel accompanied by the distant rumble of pre-monsoon thunder that sounded like noisy upstairs neighbours dragging heavy dining tables about, and by the insistent and pitiful squalling of the (bloody) hotel cat. I gave in. Gave the beast the mackerel bones … and it was quiet for a while.

The next day, after another bright sunny day with no clouds and no rain and no monsoon, I strolled past the hotel again and saw that there was indeed an upstairs room above the restaurant … and guessed that indeed people had been dragging tables about … no thunder …

There was plenty of thunder the evening I called in at a small massage place in the next village. I had gone wandering to buy snacks and saw the well-lit establishment offering one-hour massages for 500 rupees (about $10.00) so on an impulse I popped in, and was greeted by a sign declaring:

Ah well, my fantasies of a cross-dressing masseur or masseuse flew out the window and I was assigned to the tender care of Vishnu whose approach to the gentle art of massage was hardly godly at all. His technique was very strong and very sound and at the end of each section – a leg here or a back there he set sail with an almighty whallopping with both hands, Hall cries of pain mixed with the rapid tabla-like percussive beating.

I survived the experience, one of the most thorough workouts I have had, even if my favourite pair of yellow shorts ended up so oil-soaked that I caused a bit of a slick on the dusty footpaths back to my hotel.

One can eat only so many lotus leaves or blossoms before having to pay for it with an ABC day or two, so I booked a driver to take me to Another Bloody Cathedral or two, and had a wonderful day of forts and ruins and museums and a cathedral or two. 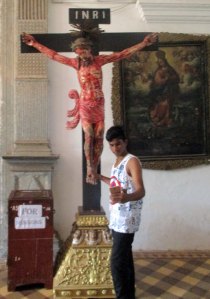 The Portuguese were very busy little bees with their building programs in the sixteenth century with a clutch of cathedrals and churches and monuments to St Francis Xavier on Old Goa city. There are still many tiny country churches scattered through the forests, often cheek by cheek with Hindu temples. My driver one day was quite busy, tooting his horn and touching his heart as we passed churches and temples.

Would that some of the warring religious parties in other parts of the world could have such a beautiful and simple approach to polytheism! 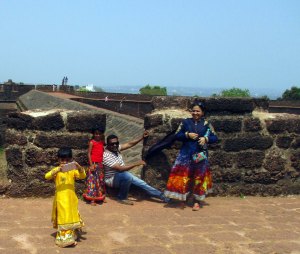 Countryside Goa is a bit like countryside Thailand or countryside Vietnam or other third-world or emerging countryside. Roads are narrow (but in excellent condition); random cows stroll blissfully wherever they wish, knowing that no one is going to make hamburgers of them; footpaths are non-existent; houses are painted deep ochres with white trims, or banana custard yellows with cream trims, or bruise purples with yellow trims, or cobalt blues with orange trims … or any other colour combination a decorator on an LSD trip could imagine.

There are grand five-star resorts … and there are casinos – on land, floating in the Mandovi River or (illegally) on-line.

Only Goa, Daman and Sikkim states allow casinos and Goa has ten of the dozen or so casinos in a country of 1.3 billion potential gamblers. A few years ago it was estimated that Goan casinos contributed an estimated 1.4 billion rupees or about AU$25 million to the State coffers each year … so it is no wonder that the State is the nation’s richest … and why, perhaps, I did not see any beggars in the streets and why the roads were so smoothly paved.

Goa of old may have gone, but the Goa of today is wonderful.

Perhaps there are seedy or sad parts of the State, or beaches that are riotous and crowded with drunken partying animals, perhaps there are secluded beaches with geriatric semi-naked hippies strolling under the frangipani trees, and perhaps what I saw was what the reality is. I loved my short time in Goa … and Suraj has offered me a 15% discount if I book with him directly for my next visit to the Mamagoa Resort

It took me almost seventy years to get there for the first time, so perhaps before I turn 140 I will get back there … and hope to find that it is not GONE!

If you enjoyed this story please scroll down to see earlier stories and forward the blog address to your friends: http://www.hallomega.com 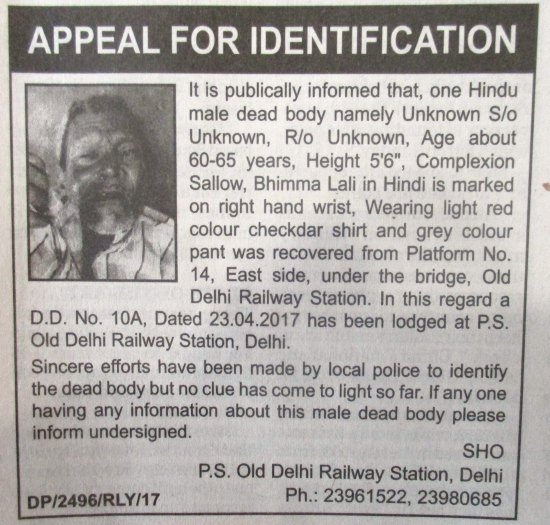 Clipping from Hindustani Times: A sad reflection on a country of 1.3 billion people