Not so many years ago, the Thai New Year – or Songkran – was a time for children and young adults to pay their respects to their parents and to their elders by “Wai-ing” (a sort of formal bow with clasped hands held high in front of the face) them, and then using small silver bowls to pour scented waters gently over the elders’ hands.

And Chiang Mai is the “go to” place to celebrate Songkran.

In Australia a few years ago a food supplier used a superb advertisement to promote its juicy sweet corn – see https://www.youtube.com/watch?v=MdxfurkPuTo – in which an old farmer sitting on the veranda of a corrugated iron homestead hears what he believes are the first few drops of rain that will break the long drought. It is not rain, however, but the sound of juicy corn being nibbled by his children upstairs, with the juice splattering the iron roof below.

Like McCain’s Australia, Thailand in April is usually very hot, very dry, and in Chiang Mai, suffering from terrible pollution as farmers and hill tribes in near-by countries burn rice rubble and forest leaf litter to promote better crops in the coming season. All this means that Songkran is a brilliant reason to celebrate by ceremonially and gently pouring scented waters over elders’ hands.

A pick-up truck passenger being “blessed”

Or – as it has come to be – by filling up the flat tray of a pick-up truck with half a dozen larrikins of all ages or any age, a giant barrel of cold water, a dozen or so air-pumped water-pistols, some small buckets … and setting sail around the streets of the Old City, drenching anyone within water-tossing range.

I have lived in Thailand for almost nine years and have – somehow – managed to avoid the thrills and dangers of Songkran all that time by travelling to Bali or other less dangerous (and less fun) destinations.

This year I was in-country, and had a delightful old friend from Wales (we celebrated our 68th birthdays in the same month this year) spending a day or two with me in Chiang Mai. On my birthday – the day before Songkran officially commenced- we drove to Chiang Rai, about three hours north of Chiang Mai, as Glyn had an appointment with the manager of an effalump conservation centre the next day.

The elephants were all terribly terribly well-behaved and not one of them sucked up a nose full of water and trumpeted it all over us. (I am tempted to make some comment about the USA’s Trump and his nose and his propensity for shoving it into other people’s lifestyles.) But the Bangkok Post had a superb photo of a lesser-mannered pachyderm spraying with gusto – and with nasal water – a couple haplessly riding in a Bangkok tuk tuks.

The journey back to the south was quite a different affair from the sedate drive north.

This year Songkran started on a Thursday and so we had the three official days of festivities followed by a couple more of “make-up” days, as is the Thai tradition when a public holiday falls on the weekend. And quite a few start a day or so early – on 12th April. Many businesses closed up for the five-day long wet weekend, and many others drew down their roller shutters as protection against the revellers.

As we drove – in air-conditioned, locked-door, closed-windowed comfort – back to Chiang Mai we waved at kids by the roadside who tossed buckets of water at my car or sprayed it with garden hoses. On one occasion I was about to overtake a lone motorcyclist who then decided to swerve abruptly to his right – straight in front of me – to avoid a drenching from happy smiling villagers.

Last year 442 people died in road accidents during Songkran – as one columnist put it, about one death every twenty minutes during the “festive” period. Thailand has the second-worst record in the world for road deaths per capita – lax seat-belt laws, virtually no drink-driving enforcement, gangs of twenty or thirty piled into the back of pick-up trucks (all of whom are thrown to the road when the idiot drunk driver speeds along and then bumps into something – a lamp post, an effalump, a motor biker, another pick-up truck …

The death statistics for this year have not yet been released, as there are two days of slaughter to go …

Yes – the death and accident rates for this time of the year are sombre news indeed … but the festival is still huge fun. It is not the traditional, gentle festival of years gone by, and it is the time when it is most dangerous to be driving on Thai roads … but …

The current government placed a ban on riding in the back of pick-up trucks just before Songkran, but so loud were the protests (“How will poor farmers get to their work?” “What about those who cannot afford motor bikes?”) that the law has been temporarily suspended and may be introduced in the weeks to come.

… and those in inappropriate dress …

After six months of official mourning for his late majesty King Bhumibol Adulyadej (King Rama IX), Thais have dropped their widows’ weeds and replaced them with vibrant and garish Hawaiian print shirts – and leis in some cases – or tie-dyed blue and white shirts to mark the new year. Foreigners, of course, have adopted “party central” dress, with people of all ages in inappropriate dress for this conservative and modest Buddhist country, with men in tiny Speedos, and a statuesque blonde woman in a micro bikini with bosoms and tattoos spilling hither and thither and causing young men on motorbikes to have accidents as they motored past, eyes popping out on stalks, not quite wanting to take their eyes off this superb specimen of womanhood.

I do wish I had been able to find my camera in time … but it was somewhere under the front seat after the mad squealing breaking of vehicles mentioned before.

Despite everything, I loved the chaos, the mayhem, the vibrancy and the joy of Songkran … and the occasional glimpse of quieter times as I saw people gently pouring water over Buddha statues and poking tissue paper flags into sandcastle pagodas at their local temples or outside their houses, and the customary foods being made and offered at numerous street stalls … beside other stalls selling the gigantic water pistols – or water cannons.

Water water everywhere nor any drop to drink

As much of the water was drawn from the city moats, I would not liked to have drunk any of it!  But it was great fun to see a group of people by the roadside – armed with water cannons, buckets and pails of water – spring into action as a motorcyclist or tuk tuk approached, but it was even more delightful to see the mobile water brigades – those on the backs of pick-up trucks – espy a roadside warrior clan and open up with everything they had in a playful two-way battle.

It took me almost two hours to drive in 410C heat about ten kilometres from the guesthouse where I dropped Glyn to reach the sanctuary of my condominium. Turning into the tiny alley where Glyn’s guest house was located a chap helpfully showed the way and suggested that I wind down the window so he could help me more … but the huge water gun in his hand suggested that I keep windows wound UP …

Along the way my car and I were sprayed, water-bombed, bucketed, cheered and waved … and I got home just in time for the huge concerts – with multi-LED lighting effects and fire hoses spraying concert-goers – at the Maya shopping mall forecourt just up the road from my apartment. Later that day and in subsequent days, an early monsoon arrived, with temperatures plummeting to 270C and heavy rains washing the skies … and making those who may miraculously have stayed dry so far wet to the skin. 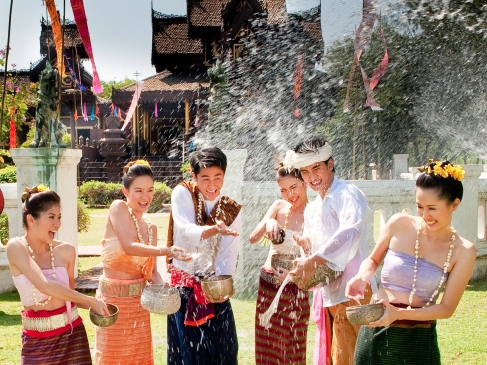 3 thoughts on “The Big Wet”