Exhibitions of sculptures by the sea is nothing new.

Sydney’s famous Bondi Beach has been running a sculpture festival for almost a quarter of a century.  The Gold Coast exhibition is now in its eighteenth year and for almost as many years Perth has offered the public an opportunity to wander along Cottesloe beach to see wonderful creations.

Internationally, similar festivals have allowed spectators the thrill of the new.

In Denmark, Australian artist James Dive created I wish you hadn’t asked for the Sculpture by the Sea festival at Aarhus in 2013.  The festival was perhaps inspired by or suggested by Mary, Crown Princess of Denmark, a native-born Tasmanian Australian.

My brother and sister-in-law visited the installation and spoke of the poignancy of the teddy bear – and all the other interior elements – that were daily drenched by an internal rain that slowly decomposed everything over the duration of the festival.  Raining House was later recreated in Sydney for locals to view – and to get wet.

There was no chance of rain on the days I visited the 2020 SWELL Sculpture Festival on Queensland’s Gold Coast, although looming clouds deterred me from joining the guided twilight walking tour.

This year the festival was celebrated in several locations, and the first we visited was the Christopher Trotter (www.trotter.com.au) retrospective on Chevron Island – a small exhibition of half a dozen works that were for me a real highlight of the festival.  Potter, who lives near the cemetery of a small Queensland country town where I grew up, uses reclaimed and re-purposed machines and metals to create rather fantastic flights of fancy.

His Beached Racer is a recycled aeroplane fuel tank that now looks rather like a sinister land-locked salamander with nasty-looking spines down its back, but his 2012 The Vomitor was a special treat.

Trotter has transformed an old council sludge pump with grotesque faces and spirits and imps peeping out here and there.  On one side is a large handle that begs to be turned.

DO NOT TOUCH THE SCULPTURES?

Of course I turned it (much to the delight of the local volunteer supervising the works) and found that it created an all-too-real sound of someone vomiting.

Christine Grimmett, President of the Beaudesert and District Community Arts Project (BADCAP), told me that Trotter has been known to drive The Vomitor and The Scavenger from his countryside studio into the streets of Boonah on special occasions.

Not far from Beaudesert or Boonah or the Gold Coast is the delightful village of Mudgeeraba.  This is a small and very pretty place, but various sources suggest that its name comes from local indigenous languages meaning:

Whatever its original meaning, the village has a delightful community feel with coffee shops and meeting places close to the village green, where SWELL was celebrated this year for the first time with a pop-up exhibition of just five sculptures, including a superb wallaby created in galvanised aviary wire by Queensland artist Ivan Lovatt.  His Man of the North (featured image, LEFT) was one of my favourite works at the main festival at Currumbin Beach (1).

Mudgeeraba also featured a small work with lovely recycled and chain-sawed burned timbers by Stephen Newton, whose main piece, Can you hear its tender frame, screaming from beneath the waves, and resembling the charred skeleton of a Viking burial ship, was a superb, simple and effective work on Main Beach.

Vikings may have terrorised northern shores many years ago, but the tiny Red Knot bird, or “Moonbird”, flies each year from Siberia to Australia and back and probably does not terrify too many people.  In its lifetime its migration is equal to a voyage to the moon … and back, I hope.

Down to the Beach

At Chevron Island and at Mudgeeraba there were not many visitors.

I was pleased to see the crowds of people – mums and dads and kids, couples, old fogies, strolling art critics, sculptors, photographers and others – but NO Chinese tourists and NO New South Wales visitors as the Queensland borders remained closed to prevent the spread of the dread COVID-19 virus.

Almost forty sculptures were scattered along the beach, and on top of Currumbin Rock was a favourite, made of recycled air conditioning ducting. 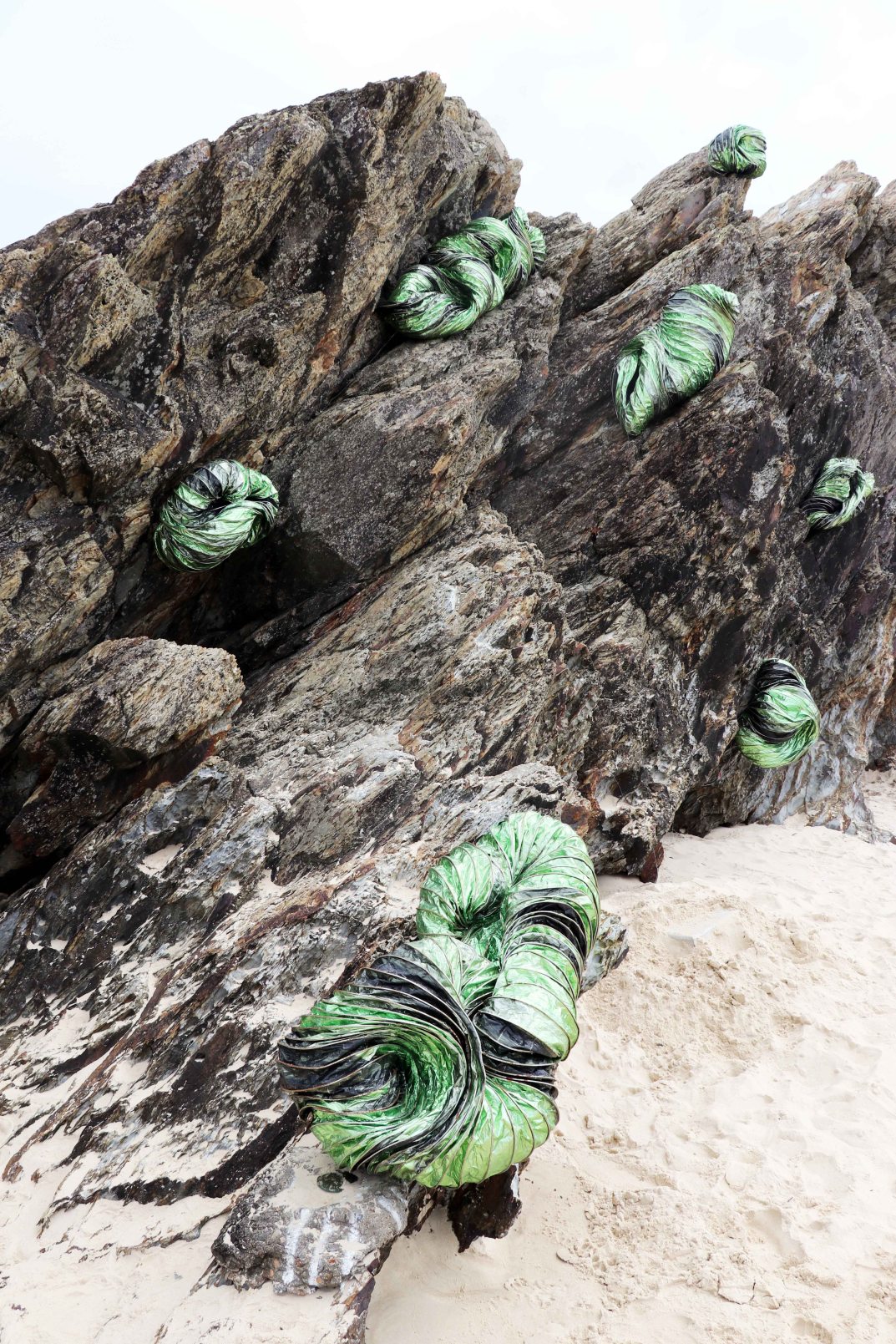 Mari Hirata’s Sentinels crawled like huge green witchetty grubs along the crevices and nooks and crannies of the rock standing proudly as the sentinel of the NE point of the beach.

Hirata priced the work at AU$5000 and at first I thought that as it was so site-specific, an art lover would also have to buy the rock they were slimmering along.  However, I have now found that if I bought the slippery, slimy slugs I could drape them through trees or bushes – or even over my sitting room settees.

I guess that art mirrors life … and that life and death can be part of art.

There was one jolly little sculpture by NSW artist Christian Newton called Five Fathoms Deep, apparently inspired by the pearl divers of WA’s Broome.  The stubby work of recycled timbers with a plastic sphere perched on top had attracted someone who placed a funerary urn at its feet … took a quick photo or two … and moved on.

I hope whoever was in that urn enjoyed his or her visit to the sculpture festival as much as I did … before we moved along the coast a little to the excellent Rick Shores restaurant (www.rickshores.com.au) for a superb lunch:  a great way to finish a great exhibition. 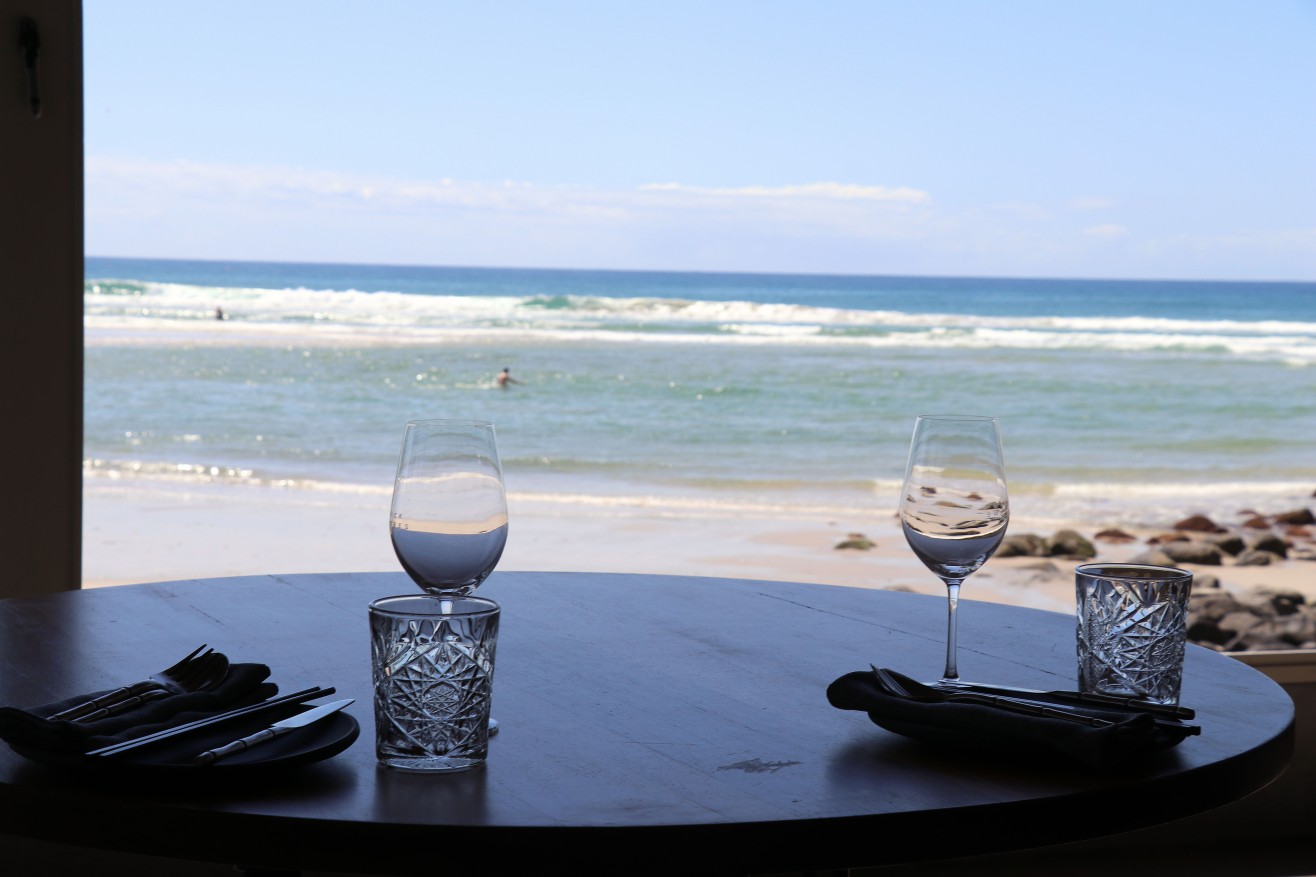 View of the beach and ocean from Rick Shores

But I guess that whoever was in that funerary urn below Five Fathoms Deep had already had his last supper.

Yvette, our waiter at Rick Shores

Photograph of Robert Guenther from The Gold Coast Bulletin