Sunday in the Park (without George)

I don’t know if you are a fan of Stephen Sondheim’s music – I find that people usually either really love his work or that they really dislike it intensely.  I am probably one of the latter and find that on the whole Puccini and Andrew Lloyd Webber and John Lennon and many others write music that appeals to me more than Sondheim’s.  However, his show, Sunday in the Park with George, apparently inspired by a painting by French artist Georges Seurat, is a good enough way to kickstart this little piece.

Today, after a gentle stroll down to the enclosed and rather chilly swimming enclosure, I fought my way past Titanic-sized icebergs as I completed several lengths of the ocean pool, and as the day was otherwise rather gloriously sunny and warm, took my book, some sandwiches and a chilled drink over the road from my apartment for a sort of picnic in the park.  OK – the sandwiches came from Coles Supermarket, the book a used one I had picked up at a second-hand bookshop and the chilled drink was a refreshing G&T complete with sliced lemon in a hiking water flask … but it was a picnic of sorts, and I was one of dozens in the Len Fox Park.

I have tried several times to find out who Mr Fox is – or was – and why there is a huge park named after him near my home.  There is a Len Fox Plumber who lives not too far away but it seems unlikely that the place is named for him – no matter how good he is with a blocked S Bend.  Mr Google also tells me that a Len Fox was a famous writer, painter and political activist and who once took tea with Ho Chi Minh, but his life seems to have been based in places other than Queensland’s Gold Coast so again it seems unlikely that the park is named for this man who died in 2004.

I walk or jog through the Len Fox Park almost every day but today for the first time I sat there with my book and my G&T and read and idly watched kids playing, and old people with their lazy house pets in bassinets or bicycle baskets. 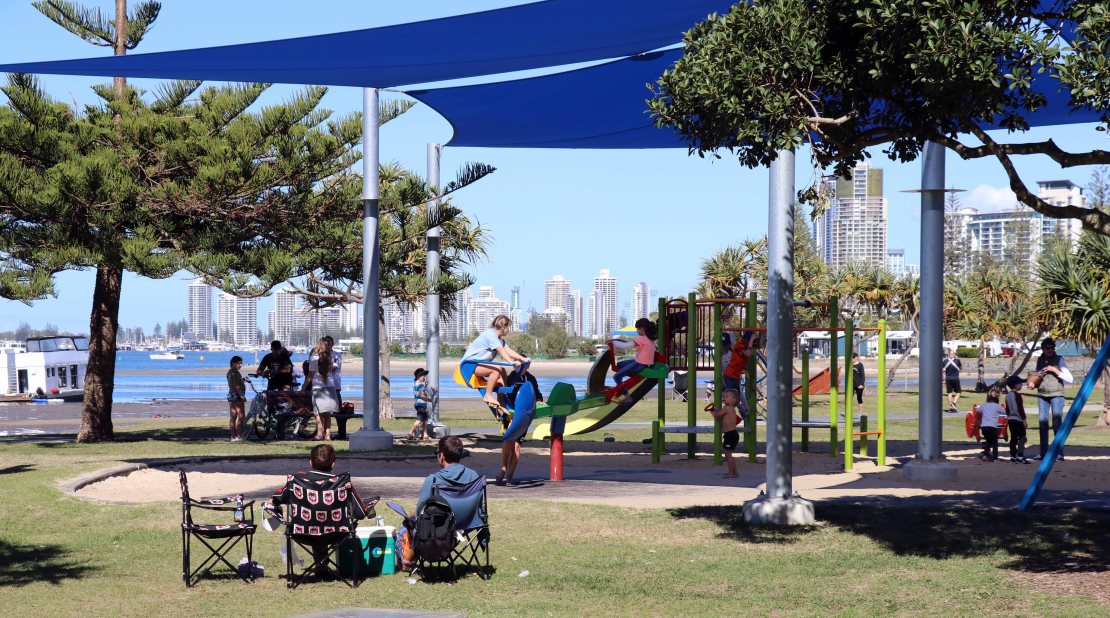 One woman stopped for a sip from a nearby drinking fountain then filled up a paper cup with water that she then took back to her perambulator, unzipped the mesh screen and fed the water to a furry animal – fat cat?  fuzzy dog?  I dunno – inside the stately charabanc.  Interestingly, in my time on the park bench, perhaps a dozen people stopped to drink from this fountain and I found myself wondering, in COVID 19 times, just how wise that was.

One heavily tattooed couple lolled on a blanket as their four blond-headed kids played happily and noisily on some nearby swings, another couple (don’t know if they had tattoos or not) set up a folding card table and chairs, elegant glasses of wine and a huge picnic lunch, while other sprawling family groups had small tents, blankets, folding chairs, portable barbecues and all the accoutrements that nomadic herders on the Steppes probably also used.

Len Fox Park is a long way from Genghis Khan, and today the ocean was a long way from the shore in one of the lowest tides I have seen in this area.  A small houseboat had become a land-bound cabin for a while and no doubt the inhabitants were looking forward to some higher tides to get the thing floating horizontally again.  A lopsided houseboat is really inconvenient as the peas keep rolling off the edge of the dinner plate.

Blue soldier crabs on the go

I loved puddling through the sludge of the low tide – a sort of muddy sandy mix – and seeing occasional marine plants poking their hopeful heads above the sandy muddy mix.  Here and there were small armies of blue soldier crabs taking advantage of the low tides to scavenge for goodies in the sludge.  I was delighted to find that they are the only crabs that walk straight forward (instead of sideways), that they are sometimes known as “Easter Eggs on legs” and that they are one of the few animals in the world that have purple knees.

I had seen a bunch of boys heading from the park onto the mud flats with a yabby pump and some fishing lines.  Perhaps they should have concentrated on catching a crab or two (before they corkscrewed into the sand) as they did not seem to be having much success in sucking these small shrimps out of the mud.

A bit further along the tidal flats I met a man with a bucket full of the critters.

He told me that he had recently resumed fishing and was trying to re-learn old skills and that hunting for yabbies for bait was very much a trial and error process:

Cast your net the other side?

I hope he had more luck that a small family gathering I chatted to.  Mum and Dad had given their son a new fishing net as a present, and today was the BIG day when it was put to the test for the first time.  Mum had a large (and empty) bucket to store all the fish the boys caught.  She and I watched as the net was slowly drawn into the shore and the bounty carefully exposed to the picking:  one small squid that was not at all happy about being picked up, and an even smaller – I mean really small – fish of some indeterminate species.

Looking forward to a good haul …

I chatted to the mother half an hour or so later to find how much of a fish feast the family was looking forward to this evening … but the big bucket was still empty and the boys had not caught anything since the squid.  Unless they go to Charis Seafoods just up the coast, I don’t think fish ‘n’ chips will be on the menu tonight after all.

The park and the foreshore are lovely places to wander, to meet people, and to enjoy life in the open.  Numerous family groups were running and playing on the sand, dogs were scampering into the Broadwater, a stand-up boarder (and I am sure there is a better name for them than that) struggled ashore lugging her heavy board up the dunes, motor boats, speed boats and jet skis puttered or roared by, and the dog man was just sitting there waiting for me.

I had seen him as I walked North, and as I headed home he and his hounds were sitting on a drainage pipe looking as if they were just about ready to head home too.  I’m not sure what sort of dogs he had – they were smallish, fluffy, friendly and doggish – but their owner spent some time in calling them to stop sniffing me and my ankles and to return to him for a family portrait.  He finally got all three to look at me – but his face was in the shadow of his hat so the photo I have kept is an earlier, impromptu one. 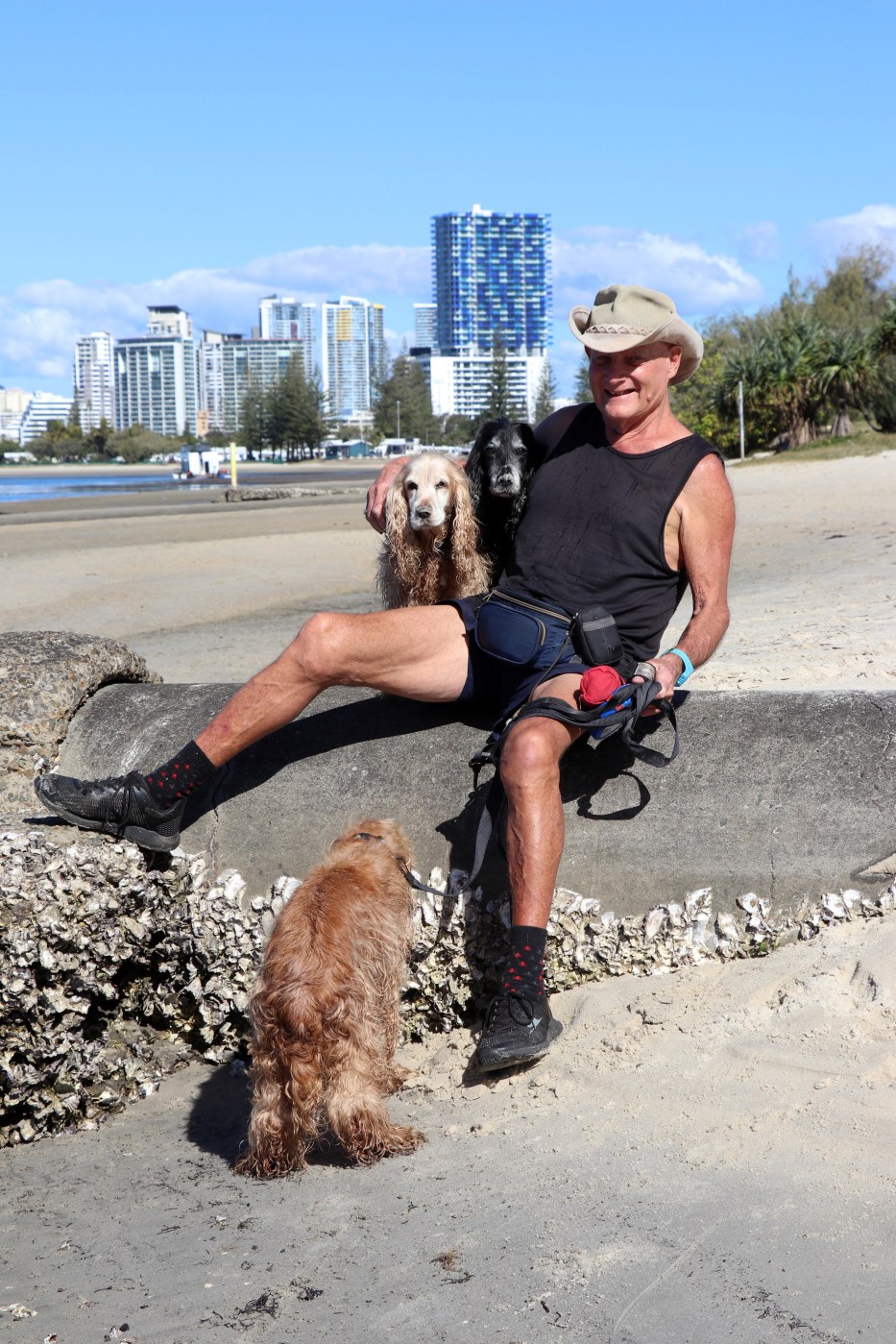 A man and his dogs

Today was a day of simple delights – a walk, a swim, lunch, a stroll through the park and along the foreshore, a couple of chance meetings with strangers, and as Sondheim said in his musical: