Brisbane, the Gold Coast and Covid-19

Today I saw the surf for the first time.

I have been back in Australia for about five weeks now – two weeks in lockdown and self-isolation in Brisbane, and a bit over three weeks here on Queensland’s Gold Coast. There are great surfing beaches stretching for many kilometres north and south but until very recently, most have been closed to the public to help prevent the spread of the coronavirus.

I lived for about twelve years in Chiang Mai in northern Thailand … and I fled the kingdom on the last Thai Airways flight to Brisbane.

In 2014 there was a military coup in Thailand and on the evening of the coup I enjoyed a meal in Chiang Mai’s Old Town … only to find that martial law had been imposed and that a curfew was being enforced. I scurried back to my cottage in the country amid crowds who feared the unknown and who were heading for the hills.

My departure from Thailand in March 2020 was a bit like that again: no one really knew what was happening or what the future would hold. Airports were almost deserted, fear and panic were felt at every corner and on arrival in Australia all passengers were cattle-prodded through health and police and immigration and customs queues, filling out forms giving contact – and next-of-kin – details.

I found myself in Brisbane with my luggage and my face mask and in a taxi queue where I was the only person queuing up. There was only one taxi. There were no more flights into Brisbane that day. I don’t know where everyone went – but I was free!

Looking South along the Brisbane River from my “self-isolation” apartment

Yes – free – to go into two weeks of self-imposed isolation in what was a very comfortable apartment in Brisbane, where my brother and his family were superb, ensuring I had a tin or two of baked beans and a dry crust of bread or two.

Although I was confined to barracks, the air was like champagne – clean and crisp and quite unlike Chiang Mai’s polluted skies. The apartment offered lovely views up and down the Brisbane River and the huge decks enabled me to sunbake (carefully screened from neighbours).

My time passed quite easily with lots of reading and snoozing and television. Trump’s mishandling of the Covid-19 situation in the USA was at least as entertaining as the mindless and repetitive advertisements I had to endure on commercial television for gum-cleaning dog chews and ambulance-chasing legal firms:

Watching the real world go by beyond my terrace was a delight.

Unlike the unfortunate later arrivals into Australia, who were compulsorily quarantined by the Australian Government in small hotel rooms, my apartment offered views of joggers and cyclists, of the ubiquitous City Cat ferries puttering like lethargic water beetles from side to side of the river, of a couple of sailing boats moored downstream with remora-like dinghies attached, of one lone stand-up paddle board sportsman and of a handful of jet ski boats.

I have found that the word “quarantine” comes from the Italian word “quarantina” indicating the forty days that ships had to moor off the Venetian coast in the Fourteenth Century to prevent the spread of the Black Death – which killed about one hundred million people – or about 50% of Europe’s population. In contrast, the current pandemic has afflicted approximately three million people of the planet’s eight billion people and has caused the deaths of more than two hundred thousand.

The coronavirus presents a serious challenge to the world – but everything is relative. Graveyard humour is already sending virus-related jokes through social media but I doubt we’ll ever have a nursery rhyme such as Ring a Ring a Rosie written about the current crisis.

Free as a bird

While in quarantine I enjoyed the challenge of sorting out the future. My original travel plans included an exploration of NE New South Wales as a possible future home. All interstate borders are now closed and any unnecessary travel is forbidden.

While in isolation I was able to search for rental accommodation in SE Queensland, for a new car, and for medical insurance, the prime reason I returned to my home country. As the old joke would have it:

I hope I have not come back to Australia to die – or even yesterdie – but it is a sad fact that Covid-19 has claimed the lives of too many older people in retirement villages here and all over the world.

People say you can find anything – or everything – on the Internet and perhaps there is some merit in such a claim. On the day the jailors turned the rusty key in the padlock on my door, handed me back my non-prison clothes and the $3.56 I had made sewing mail bags during my incarceration, I was free.

A quick taxi to a car dealership. An hour of documents and a quick test drive. Sign here. Sign there. Thank you Mr Hall – the car is yours. Zoom Zoom. (Yes – the car is a Mazda.) Hello Gold Coast. Mr Google maps tells me that my apartment should be about here. Yes. Sign here. And here. Thank you. Welcome to your new home.

Usually I would have fiddled and fuddled for weeks and tested many cars and used the white-glove-inspection approach to house searches, weighing up ocean views against naked sunbaking possibilities, two bathrooms or three, walking distance to a shopping centre, undercover parking, quality of art works in the building’s public spaces and other essential feng shui essentials.

And so far it has been pretty damn good – thankfully.

Early morning joggers in the park opposite my apartment

My new apartment looks out over a pretty little park to the lovely Southport Broadwater and offers many kilometres of walking or cycling pathways. I have been amused to see people taking their morning walks with their dogs snugly seated in perambulators. One woman even took her bird for a “walk”. The critter was in the basket on the front of her bicycle, with a gay strawberry-patterned handkerchief held in place on the top of the basket with four clothes pegs.

There is a swimming enclosure in the ocean just south from my place, and shopping centres and coffee shops – take away only – all over the place.  A mobile ice cream van calls in my street every now and then. Its loudspeakers blare out Row row row your boat  in sharp contrast to the mobile ice cream sellers in Chiang Mai who push their little hand carts along the dusty streets while quietly – and politely – ringing tiny hand bells.

There are signs here and there that challenge me – crusty old English teacher that I am.

There is a place nearby that shows drivers where to go for PICK UP’S but does not tell them where to go for DELIVERIES. There is an apartment complex nearby called MARINER’S HAVEN that has twelve apartments. I guess the lucky mariner can move to a new abode every month. There is also a place called WATERS EDGE that is just screaming for an apostrophe.

Norfolk Pines, Cyclists and the Broadwater viewed from my apartment

Near my home are beautiful Moreton Bay fig trees and tall Norfolk Island pines and lots of birds cawing and cackling all day. Several murders of crows plummet through the skies, gaily coloured flocks of parakeets zip effortlessly between tree branches, there are pelican’ts (large birds that look graceful in flight or sailing the waves – pelicans – but who look singularly ungainly – pelican’ts – when perched unglamorously on street lights dripping guano on unsuspecting passers-by), and gawky cormorants drying their feathers on the pontoons by my swimming enclosure.

My brother called them “bin chickens” and I have found they are also called “dumpster divers” or “tip turkeys”.  The ancient Egyptians revered these birds as they were associated with their god Thoth. I wonder if Thoth was a scavenger, a white-bodied, long black-beaked scavenger? These horrible ibis birds raid the rubbish bins in my park and deserve all the bad press they get.

I have been observing the ruling to avoid unnecessary travel, to stay at home as much as possible, and to observe “social distancing” – a new phrase to enter the English language. Instead of the mandatory 1.5 metres, signs in Australia’s crocodile-rich Northern Territory recommend that people stay “One small croc” apart – a lovely local and ironic touch.

I am happy to do all that but I am tired of the talking heads – famous people or local celebrities or wannabe “Voices of the People” – who earnestly address home television cameras and tell me with terribly sincere voices that we will get through this together.

But today I saw the surf for the first time …

Surfers at The Spit

As the death toll and number of new cases of the virus continue to drop, some restrictions in Queensland are slowly being lifted. Several nearby beaches have been opened to the public, so long as visitors continue to maintain the 1.5 metre gap between each other.

Walkers at the end of The Spit

Today I drove to “The Spit” – a long sandy arm that stretches about eight kilometres north from Southport until it almost reaches South Stradbroke Island. Surf fishermen blithely ignored signs warning that the huge boulders used to make a breakwater may suddenly move, surfers blithely ignored the fishermen tossing weighted and hooked lines into their shared waters, and dogs blithely ignored their masters’ commands to SIT or HEEL and chose instead to careen madly across the sands in futile pursuit seagulls who were in equally futile pursuit of the chips or French fries usually tossed to them by visitors. 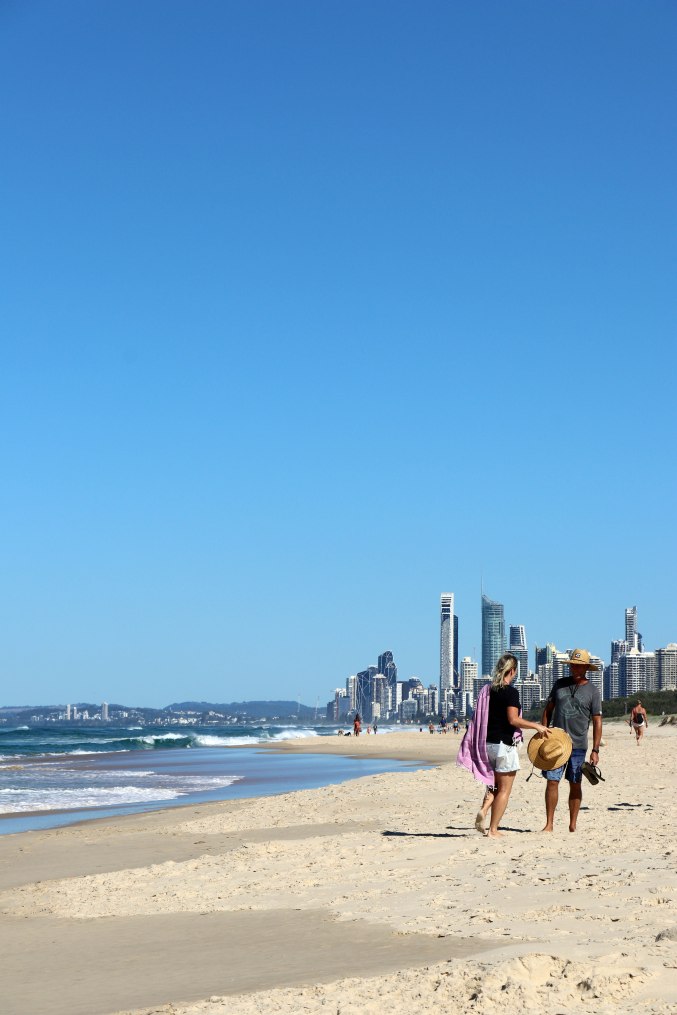 At The Spit Beach and Main Beach and Surfers’ Paradise beach, waves were rolling in from the Coral Sea, surfers and body-boarders and toddlers were enjoying the sun and the surf – and everyone was keeping a responsible distance from everyone else. Unless they were family members. Or unless they lived in the same house. Or unless their names started with a Tuesday or …

I am back “at home” again, avoiding unnecessary travel and contact with other people. Joggers and cyclists and paddle boarders and walkers are jogging and cycling and walking through the park over the road. Kite surfers are cutting through the Broadwater with their parachutes ballooning in the afternoon sun, fishermen in their little “tinnies” putter about looking for dinner and windsurfers ride their boards spraying Tiffany diamond necklaces of droplets as they zoom along.

Yes – we will get through this together – or there’ll be barbecued birds on tomorrow’s menu.

8 thoughts on “Brisbane, the Gold Coast and Covid-19”