Shibu and the Snow Monkeys 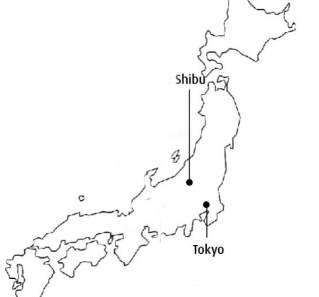 I really do not like monkeys or orang-utans or macaques or gibbons or any of their ilk, yet I recently paid a goodly sum to go and see some. I did not, however, get too up or too close to them: rabid, flea-ridden, badly-behaved scavengers that they are.

The title for this essay sounds more like a children’s adventure novel: Young superhero Shibu faces all sorts of perils and dangers, endures great hardships, narrowly misses being attacked by a McDonald’s cheese burger and fries, but manages against all odds to save some cute little furry beasties … and they all lived happily ever afterwards.

I had often heard of Japan’s famous snow monkeys and as I was in the area I rather felt I should do the right thing and go to see the bloody things … and am actually rather glad I did. From Nozawa Onsen, where I was staying, it is a pleasant forty or forty-five minute drive through the fascinating rural areas of Nagano Prefecture.

This part of Japan is famous for its rice, apples and grapes, but the grape vines are really unusual and quite spectacular. Most countries where grapes are grown for the production of wine use more or less the same sort of trellises: a vine is planted and as it grows its branches are fastened to long horizontal wires and after the fruit is harvest, the branches are more or less completely cut back.

Not so in Nagano. 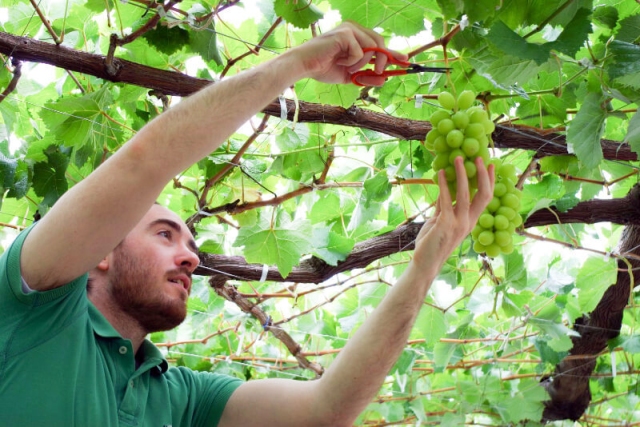 The local vines have massive trunks – perhaps thirty or so centimetres in diameter and are carefully wrapped in layers of straw for the winter. The vines are planted about five to ten metres away from each other. The branches are then trained to radiate out around huge circular structures at about head height – and I guess the fruit would dangle down from the overhead construction when ready for harvest. At harvest time I guess the pickers are chosen not for their dexterity with a pair of snippers … but for their height or lack of height to be able to fit under the canopy.

While the countryside under a light covering of snow was quite pretty, I believe that when the apple trees and cherry trees – there are many of both – are in blossom in April, the countryside would be even more attractive: forget Mt Fuji in April – go to Nagano!

To reach the Jigokudani Yaen Koen (Snow Monkey Park) you walk about one and a half kilometres along quite muddy paths, but between magnificent cedar trees and deciduous oaks. Shinji, our driver, told me that the Japanese government has had for some time a massive cedar planting program that is wonderful for the environment and for making traditional Japanese homes that use cedar planks, cedar shingles and cedar beams – but the pollen also causes tens of thousands of people to suffer from hay fever! Well, as they say, you can’t make an omelette without breaking wind. 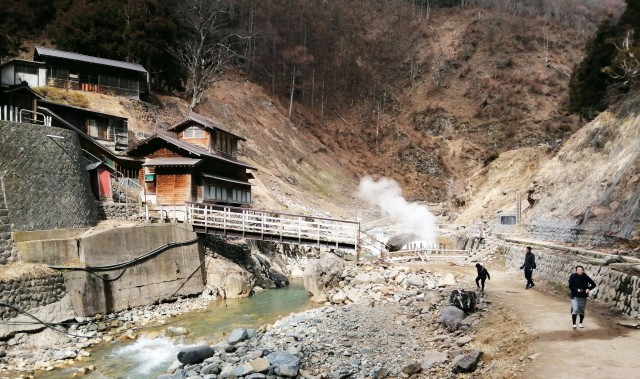 Helpful signs along the path point out helpful things and remind visitors of the absolute ban on plastic bags: monkeys will become quite aggressive and grab at the bags believing that they might contain food. Almost at the entry to the park the path divides to allow access to the Ryokan Korakukan that seems to tumble down the hillside into the river and a huge plume of steam escaping from the super-heated waters that give the area the hot tubs for the monkeys to bath in. 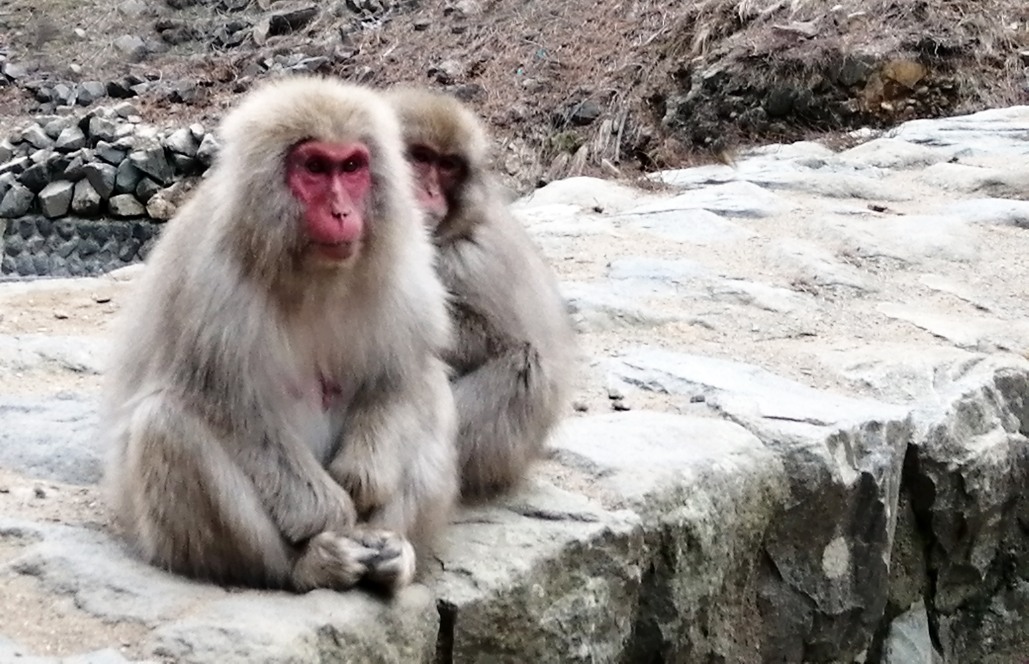 At the end of the path are the monkeys – tons of the critters. Apparently these red-faced beasts are actually Japanese macaques – but what the hell – they still did what monkeys do everywhere – scurrying about, scratching each other’s backs hunting for fleas, chasing and screaming at each other (sounds a bit like my home!) and generally looking and behaving as monkeys or macaques or whatever furry things they are. 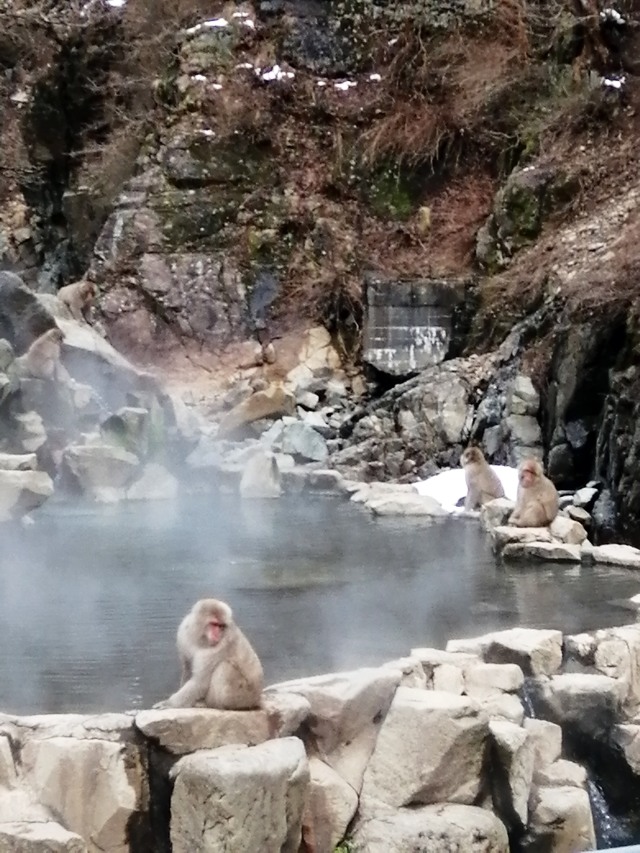 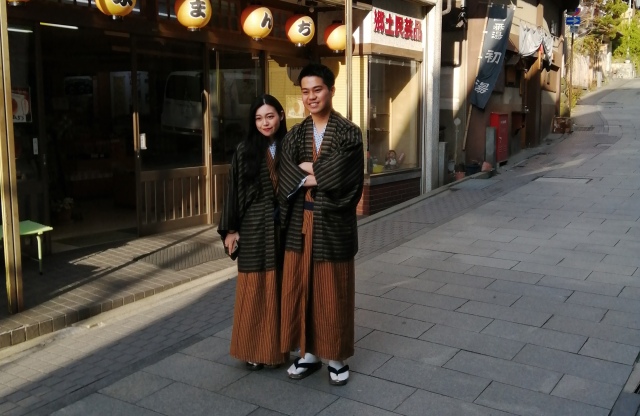 Shibu dates back over a thousand years and is a small city with nine public onsens or hot tubs.  In Japan, apparently, people will choose to have a beach holiday or a mountain holiday or an onsen holiday. For the latter they totter about the town on the old wooden geta clogs, dressed in kimonos or yukatas and tanzens, and spend all their time when not tottering or eating plunged up to their necks in hot waters. 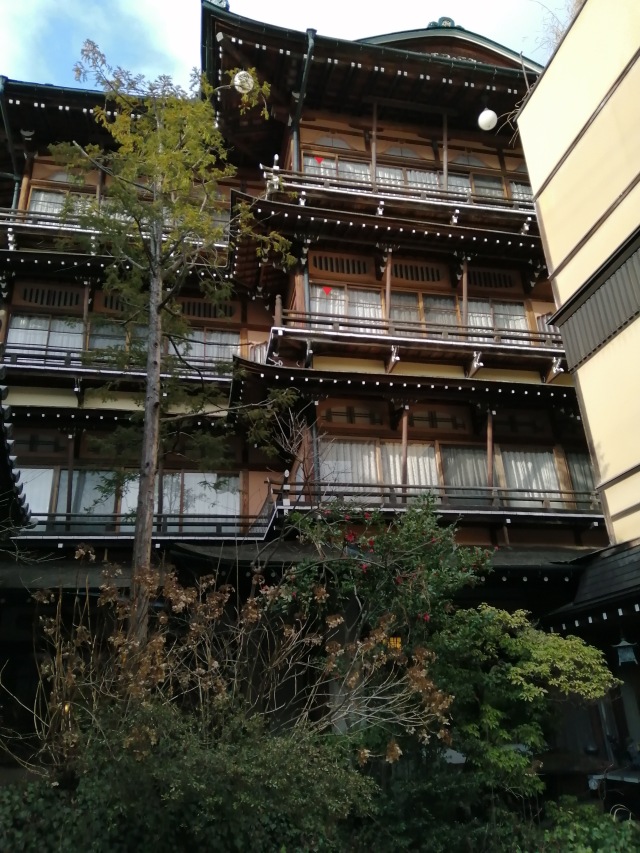 One of the most popular hotels in town is the Kanaguya Ryokan – an impressive place some three or four storeys tall and originally made from timber without using nails. Some of the restorations at Kanazawa Castle use the same principle of interlocking beams. The inn is located in an area of old houses, narrow winding cobbled streets and has, of course, its own famous hot tubs for residents.

The same river that starts at the monkey park runs through Shibu: The Yokoyu River. It later joins the Chikuma River at nearby Iiyama then changes its name again to become the Shinano River. Together they – or it – are or is the longest river in the country at 367 kilometres long. 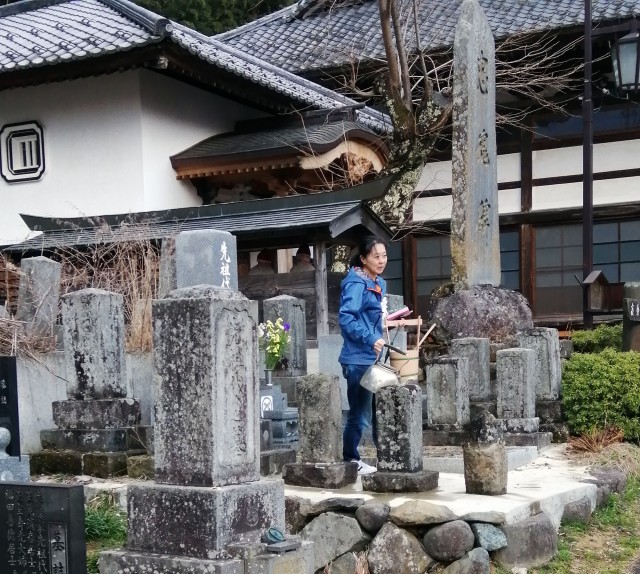 Tending the family grave near a temple

On the older side of the river, where most of the onsens are, there are also many impressive temples and the steep flights of stairs up to the top are worth the effort as excellent views back over the city are offered. Sometimes wild monkeys – not those pampered beasts from the monkey park, but critters straight out of the forest – come into town and attack people visiting the temples or do quick smash and grab raids on the merchandise displayed outside many of the shops. One old woman has had to put special doors in her shop as a group of monkeys invaded it last year and caused considerable havoc. 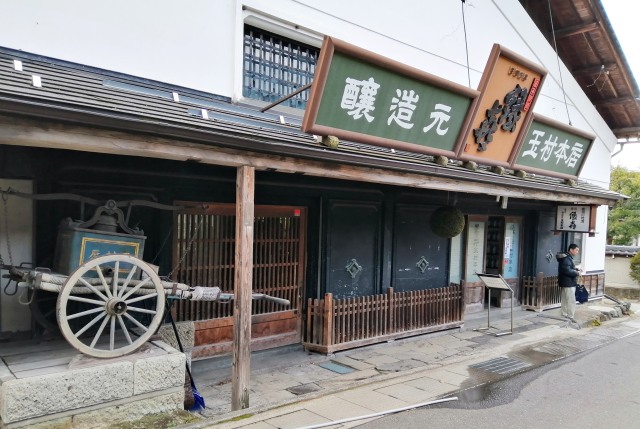 Nearby, and thankfully monkey-free, is the Tamamura Honten sake brewery, established in 1805 and still going strong. We stopped there for a free sake tasting experience and were offered a dozen or so different brews to sample. Unusually for me, I had just one tiny cup of one variety of sake and then went outside to sit in the sun. The others were more tempted and most came out with bags full of bottles that would probably not last too long once they got back to their hotels.

As we headed back to Nozawa Onsen we passed groups of old men playing what looked like a version of croquet on dusty pitches beside the Yokoyu River – I hope they were not drunk on too much Tamamura Honten sake.

Although I dislike monkeys or orang-utans or macaques or gibbons and all of their ilk, I am glad I went on the monkey tour as it gave me the opportunity to explore a new and interesting corner of Japan – and, yes, – to see some bloody monkeys. 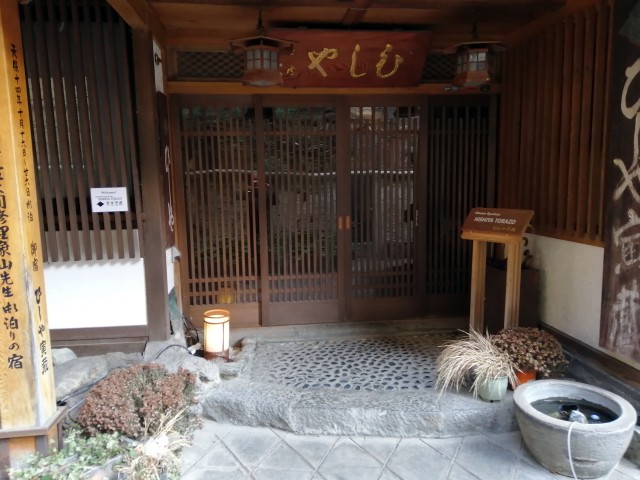 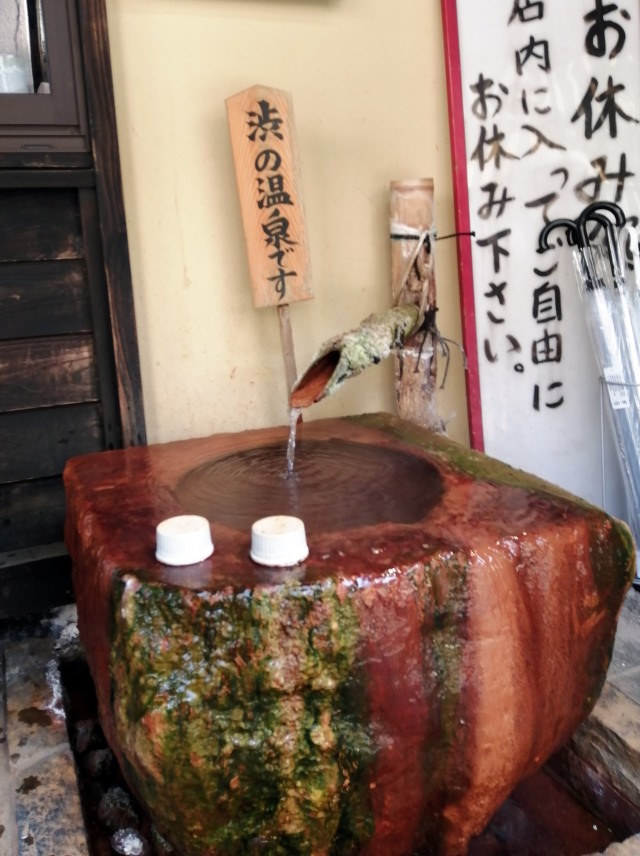 One of the very few hot springs that offers drinking water

Plucking grapes photo from the Internet