More or less due East from Chiang Mai in the ancient Lanna Kingdom is the provincial town of Nan – a pretty jolly place of about 20,000 people. Its mountainous location makes it a bit difficult to reach as there are no direct East-West roads. Travellers must divert far to the south to Lampang before tracking North, or go up the highway to Phayao and then cut across the country.

Its relatively remote location is perhaps why some farmers try to increase their lettuce farms’ profitability by planting opium poppies between the rows of vegetables. Today’s Bangkok Post carried the story of a raid by police on a farm in Thung Chang, Nan, where they found rows of poppies … but the opium latex had already been harvested … The late king, HM King Rama 9, worked extensively to persuade hill tribe people to refrain from growing opium poppies and encouraged the development of other cash crops. Unfortunately, it seems his efforts were not a total success.

Nan River runs through the city and eventually joins up with the Chao Phraya – so in theory you could hop in a rubber tube at Nan and end up in the Gulf of Thailand south of Bangkok. Not many are stupid enough to do that, but the Nan River Festival – unfortunately held a month or so before my visit – sees scores of long boats take to the river for a series of races. One of these massive canoes is on display in a shelter by the river, and the town’s streetlights are decorated with silhouettes of the racing boats.

Perhaps the town’s greatest attraction is Wat Pumin – right in the centre of town and over the road from the excellent Tourist Office – maps, advice and directions all given freely. 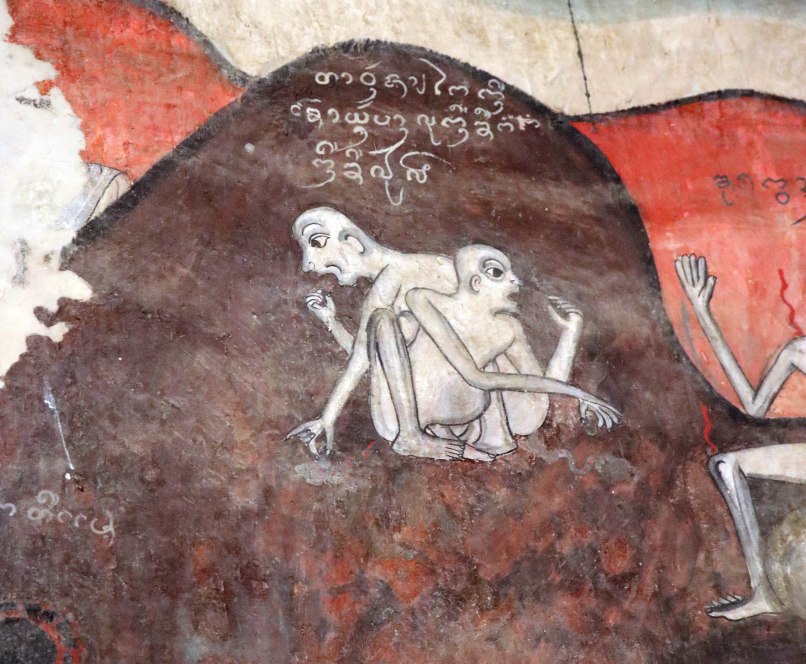 For historians and architects the 500-year-old temple has several interesting features, but for most visitors the murals and wall decorations are the great draw card, and of these, two are worth of a spot in the Greatest Hits of Phumin: the copulating monkeys and the iconic painting known in Thai as Pu Marn Ya Marn, and in English “Whispers of Love”. 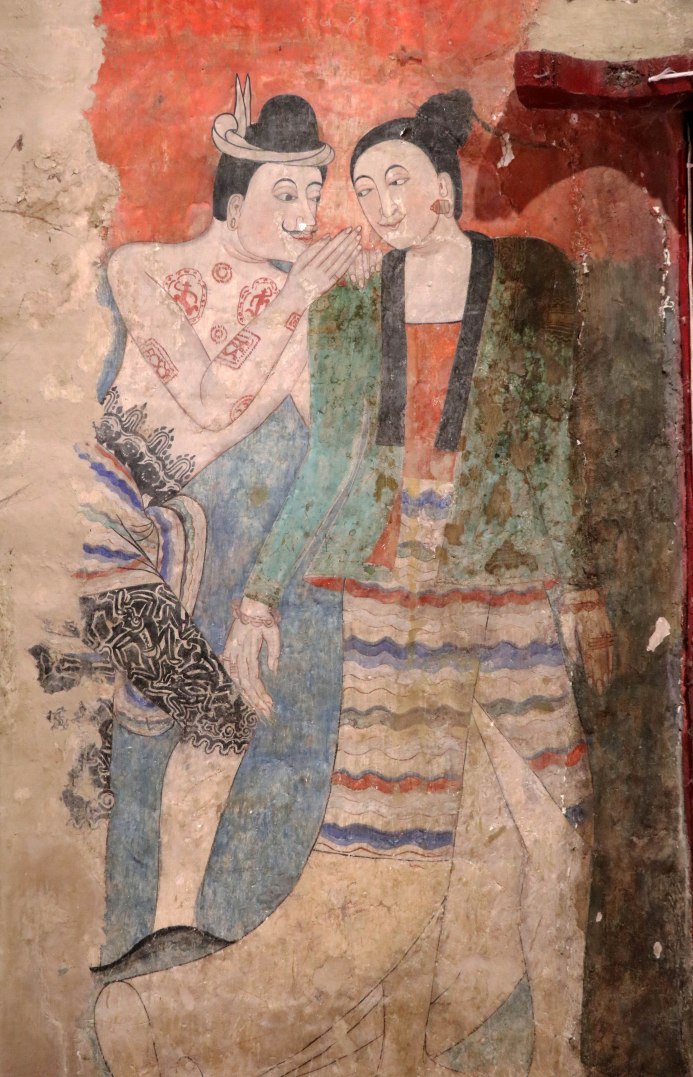 People queue up to have their selfies taken in front of this delightful work but if you go just a few kilometres out of town, the excellent Riverside Arts Space (the same entry price for all visitors) is a more accessible place for selfies. A whole art industry has sprung up from the whispering lovers and you can find ceramic lovers’ heads, iron sculptures of the couple, contemporary lovers imitating the kiss – and there are probably also tea towels with the image printed on it.

A modern version of “Whispers of Love”

The Arts Space is the brainchild of local artist Winai Prabripoo, whom I met during my visit. His vibrant abstract works dominate the space, but paintings and sculptures by others – including a group of school and university artists attending a workshop at the gallery – occasionally find wall space.

The walls of the National Museum – inside a former royal palace and surrounded by lovely gardens including a frangipani alley that must be quite spectacular when in flower – are also covered in interesting works ranging from military weapons, a sacred “black” ivory relic and cases of different Buddhas.

Unlike the Riverside Arts Space, the dread “Two Tier” entrance system applies at the National Museum. At the door a sign in Thai says that the entrance is THB 20. The sign also says (in English and Chinese) that the entrance if THB 100. I tried to sneak in as a local, flashing my Thai diving licence … but to no avail. Arrested, hauled in irons back to the front door and tossed unceremoniously in the dust, I lay there in ignominy as muscular women stood over me with replica war weapons until I coughed up the full amount. Ah well … 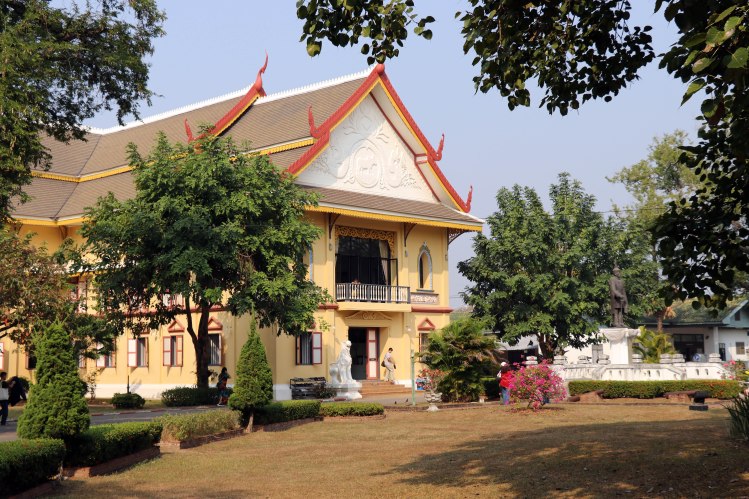 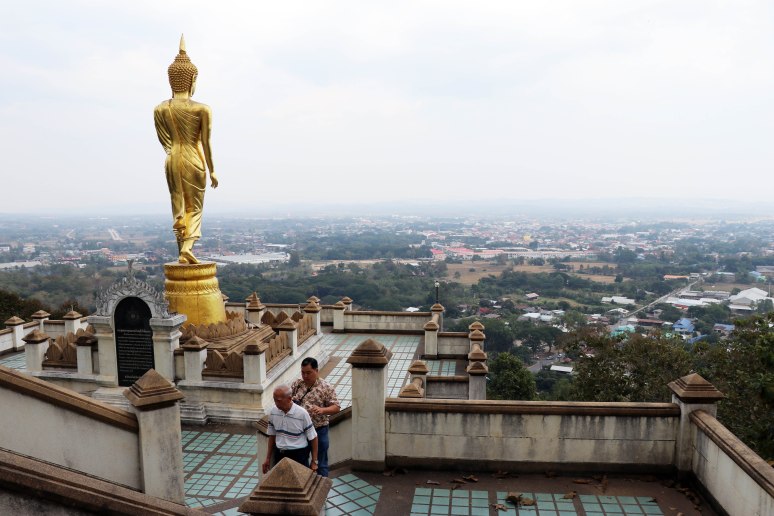 Golden Buddha and Nan from Wat Pra That Khao Noi

I had been told that the small and historic town of Pua was, as the Michelin Guides used to say, a place that mérite un détour so I directed the car to make that detour … but found it did not really justify the visit. Some nice rice fields, a modern looking bar called The Port, a Folk Museum that was closed … and that was about it. A Thai friend whose mother lives in Nan later told me that Pua is wonderful and that I had dismissed it too quickly.  Ah well …

However, that small detour along excellent dual carriageways proved that not all roads in Nan Province are a challenge.

Another day I took that challenge.

My fuel tank was about half-full and I figured I’d be able to refuel en route to the fascinating village of Bo Kluea, NE from Nan and more or less on the Laotian – Thai border, deep in an area of Tai Lue culture.

I can now tell travellers that there are no refuelling places anywhere heading North from Nan: my fuel gauge sank lower and lower as the car drove higher and higher going from about 200 metres above sea level to about 1700 metres and as temperatures dropped from 300C on the plain to 170C in the mountains. The gauge sat on empty for quite a few kilometres and I saw myself having to find a place where I could pull off the road – not an easy task on those mountain roads – and hail a passing buffalo to take me into town with a jerry can.

Aha! What is this? A sign for a service station peeped out from the trees as I rounded a steep curve (another steep curve) just a couple of kilometres from Bo Kleua. Saved! No buffalo needed.

A crusty old salt? Or salt of the earth?

Perhaps people have referred to me by these terms – but not in my hearing as far as I know. But the second one – “salt of the earth” is particularly interesting. There are several films – including one banned version – with this title but as far as I can find there is no other place in the world where salt is harvested in this manner from deep in the ground. 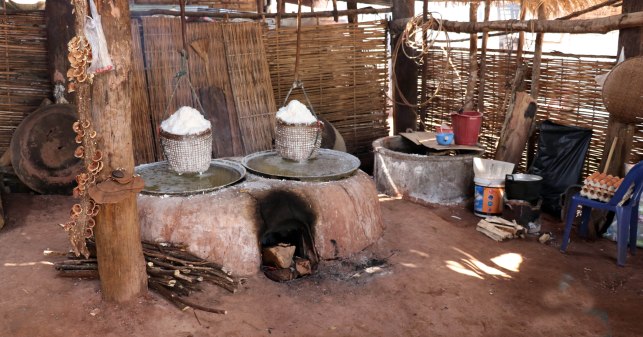 A centuries-old well in the heart of Bo Kluea draws naturally salty waters from some deep subterranean stream. Curiously, the pretty stream that runs through the village is not salty at all. The well water is placed in shallow bowls over slow fires and stirred and stirred (see image at LEFT) until the waters start to evaporate.  The residual salt is then scooped out, placed in bamboo baskets to dry and then turned into various cosmetic facial scrubs, domestic table salts and a myriad of other local products. I had some sensational roast chicken from a street stall, but the more I ate, the saltiness proved to be too much and the original sensation of WOW turned into a sensation of PHEW.

The complete circuit takes you back from Bo Kluea to Pua and on to Nan.

It is easy to write that but the roads are quite challenging and quite sensational.

In places, the road is just a thin strip of black satin ribbon frivolously draped across the very top of sharp ridges with deep valleys falling away on either side. At times the road becomes quite gay as scarlet flags planted at the roadside provide a splash of vermillion against the deep green forest to tell drivers that a particularly nasty curve is coming up. In the Phu Kah National Park, if you time your visit well, the forests are studded with superb pink flowering trees – Chompoo Phu Kha – which are quite a glorious sight if you are brave enough to take your eyes off the road ahead.

It is a relief to rejoin the wide highways at Pua and to head for Gin Restaurant in Nan.

This is a wonderful addition to the North East. It was co-founded by Attawat “Aon” Thongchaiprasit and draws on his experience as Executive Sous Chef all over the world – China, UAE, Japan and most recently at the Intercontinental Hotel in Thailand’s southern coastal resort town Hua Hin. Gin is a small place and offers a wide menu of Thai and international food. There is a good wine list and it, certainly mérite un detour.

Another small detour involved visiting the mother of my neighbour’s partner. I had been given GPS coordinates and swerved and dodged and turned on ever-shrinking roads until I found myself outside a house in the country where a woman was (as always in Thailand) sweeping leaves in the garden.

A second attempt in my very best Thai language got a more enthusiastic response and I was shown the family house and another house that had been specially built for the mother, then, waving goodbye to the many sisters and nieces and nephews I set sail again, no doubt leaving behind me some very confused Thais:

If they were confused then, I too was soon to be very confused indeed as I arrived in the town of Phrae (pronounced, more or less, “prayer”), where I did not have the faintest prayer of finding the hotel I had more or less randomly selected from Google Maps. I strongly advise you not to arrive in Phrae after sunset when the central streets of the town are blocked off for a Christmas or early New Year market or perhaps just their usual Saturday Night Market.

I found myself somehow driving the wrong way up a one-way street, most of which was filled with food and clothing stalls and milling crowds of bemused locals wondering who this strange man was and what he was doing driving through the middle of a festival. Finally a kindly policeman tapped on my window and asked me what I was doing. My feeble explanation that I was trying to find XYZ Hotel … and that Mr Google kept telling me to drive here, turn there, to ignore the torpedoes and the crowds … did not generate much sympathy … but at least he did not haul me out of the car, place me in irons and toss me unceremoniously in the dust.

A kindly woman (yes – Phrae is very kindly to idiot drivers!) took my car by the hand and led it – and me – to a side street where I could escape the mêlée, find the hotel I had been looking for (no vacancies) and eventually find a soft and welcoming bed at another hotel after some spectacular scenery, some curious family moments, and a very nice chat with a young policeman.

I wonder if Livingstone ever had similar experiences?

Nan is not an easy province to travel in – unless you are a motorbike maniac as two Thai-Polish friends here are, and who did almost the exact same loop a week later on their motorbikes and loved the challenge of the switchback, roller-coaster, spectacular roads – but it is certainly worth the detour.