A couple of foodie weeks in Australia

Not so long ago, Australia was known for its meat pies and tomato sauce, lamingtons, Iced VoVos, Pavlovas and overcooked roast beef with soggy vegetables. You can still find all those delicacies but the country is now becoming a foodie destination in its own right.

My journey to Australia was to spend time with friends and family but it also allowed me to try a few of the many foodie options.

In this most elegant of cities I watched some of the Rugby World Cup matches at a lovely old Melbourne pub at the top end of Bourke Street: The Elephant and Wheelbarrow. The pub was cosy and at times riotous as the televised broadcasts from Japan showed the Australian Wallabies beating Uruguay, Japan’s Brave Blossoms trouncing Samoa and England stomping all over Argentina. 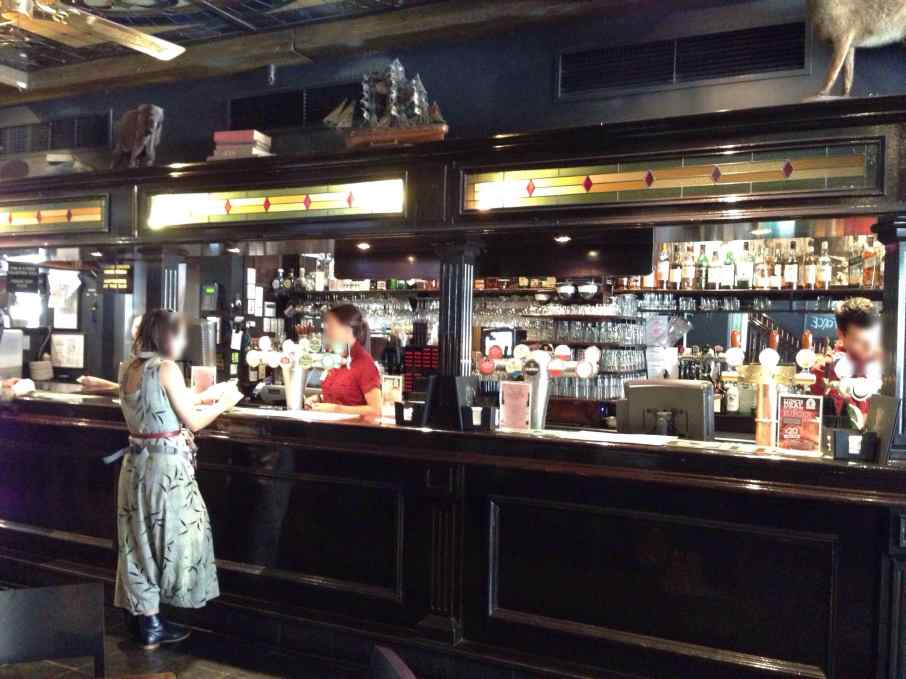 In the tradition of good old UK-styled pubs, The Elephant and Wheelbarrow had heavy timber beams and huge handrails on the stairs leading to the upper floor, framed prints on the walls, garish multi-coloured carpets, half a dozen or more beers on tap – and excellent pub food. My roast lamb with mint sauce came with a huge pile of vegetable, a whopping Yorkshire pudding and lashings of gravy and went very well with a couple of glasses of South Australian Shiraz.

People often overlook Australian wines – thinking that France and Germany are the bees knees in the wine world. However there are about 2500 wineries in Australia – compared to just three hundred or so in Chile and the 27,000 to be found in France. One of my favourites is the Gravesend Grove vineyard, located just a few hundred kilometres NW from South Australia’s Oodnadatta. Gravesend produces a great Shiraz with hints of bitumen and boot polish and slight overtones of scorched cardboard.

A couple of days later I had brunch with a friend at PSK in Melbourne’s elegant and fun Southbank. A couple of glasses of Tasmanian bubbles washed down splendid grub at the Pure South Kitchen in Southbank. PSK flies in fresh goodies from Tasmania and the islands of the Bass Strait and whips them up into pretty amazing meals. Our brunch featured smoked ham, mixed mushrooms, home-made HP relish, rye breads and soft poached eggs.

Tasmania – not to be confused with Tanzania – used to be known as The Apple Isle and was famous for its apples, its convict history and its reputation as the dead end of the world. Now it is a brilliant destination for people seeking history, incredible treks through rugged snow-capped ranges, super-fine woollen products … and superb food and drink. 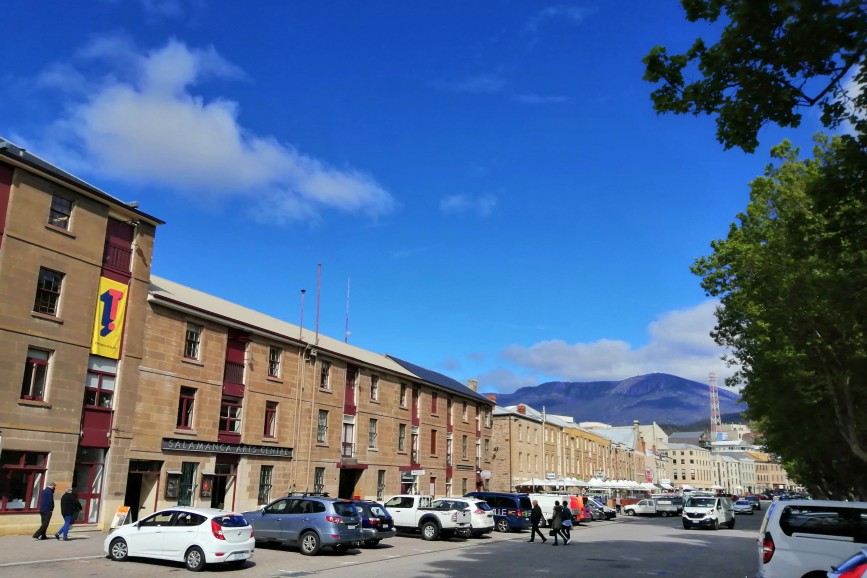 Salamanca Place with kunanyi / Mt Wellington (1271 m) in the distance

Just down the hill from St David’s Cathedral is the sensational Salamanca Place with scores of fine eateries and drinkeries (is there such a word? If not – why not?) scattered along the waterfront and in magnificent old sandstone buildings that used to be ships’ chandleries. 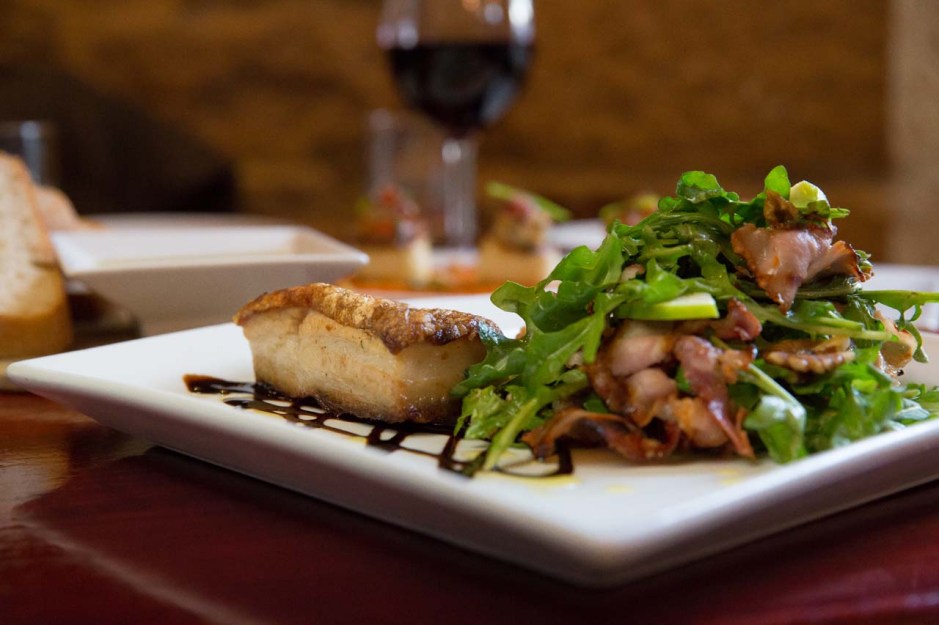 Maldini, T42, Cargo, and many other restaurants offer local scallops, bruschettas topped with rib eye strips, feta and greens, chunky pumpkin soups, salmon and fillet steaks, local seafood hauled in that afternoon from the seas around the island state, oysters chopped off passing rocks and lobsters tugged from craypots dangling below merry orange or red buoys. There are gutsy red wines, sparkling whites and more ciders than a sailor could poke a stick at. 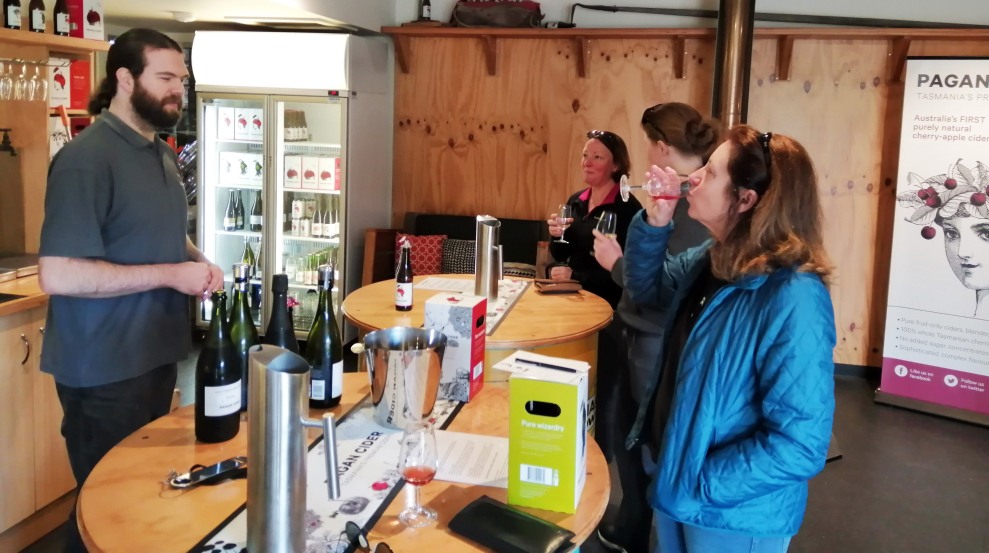 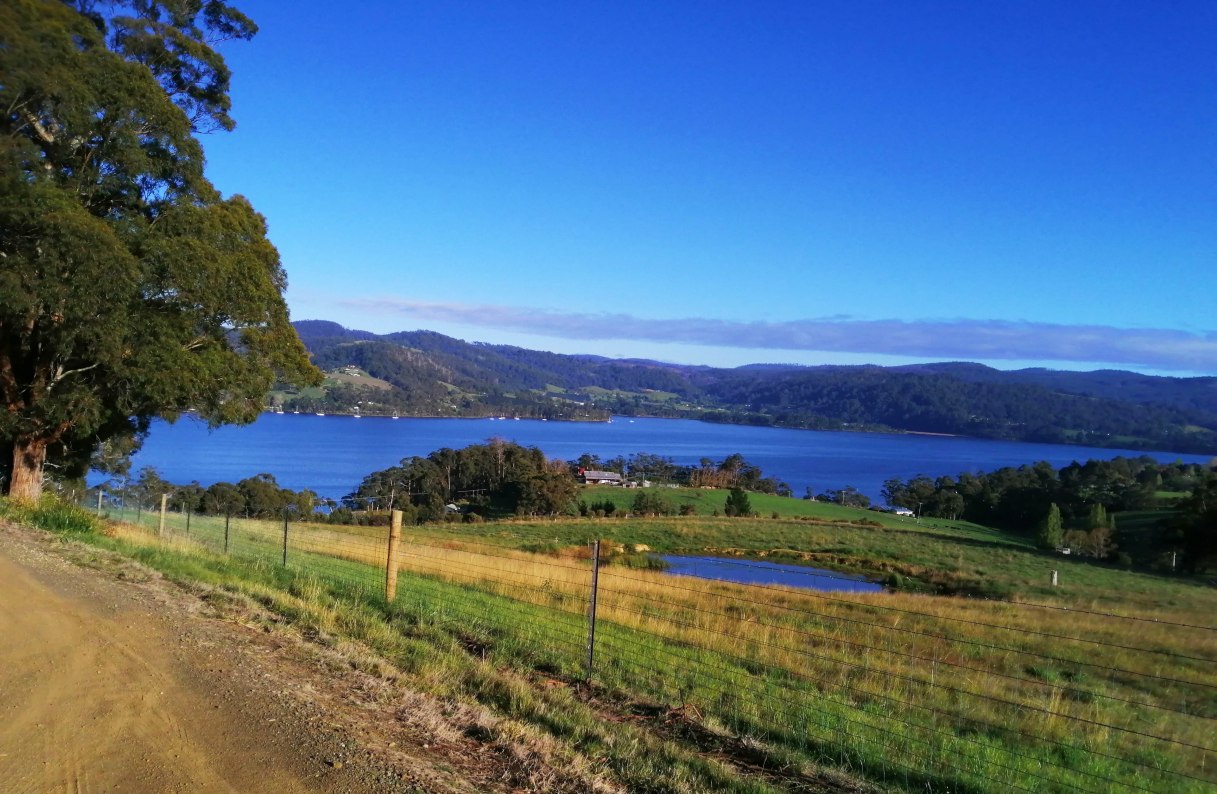 View across fields to the Huon River

I spent a night or two at a lovely old restored cottage overlooking the Huon River – home of the superb Tassal salmon hatcheries – where my foodie host served wonderful food including an amazing scorched sweet corn salad in a garden packed with azaleas, tulips, Christmas lilies just about ready to show their finery, irises, dwarf cherry trees, Pride of Madeira, camellias, rhododendrons, azaleas, lupins, proteas, banksias, lavender, roses, bluebells, jonquils and a few dandelions. I got to spend half an hour or so watering this wonderful garden before going back for more great grub. 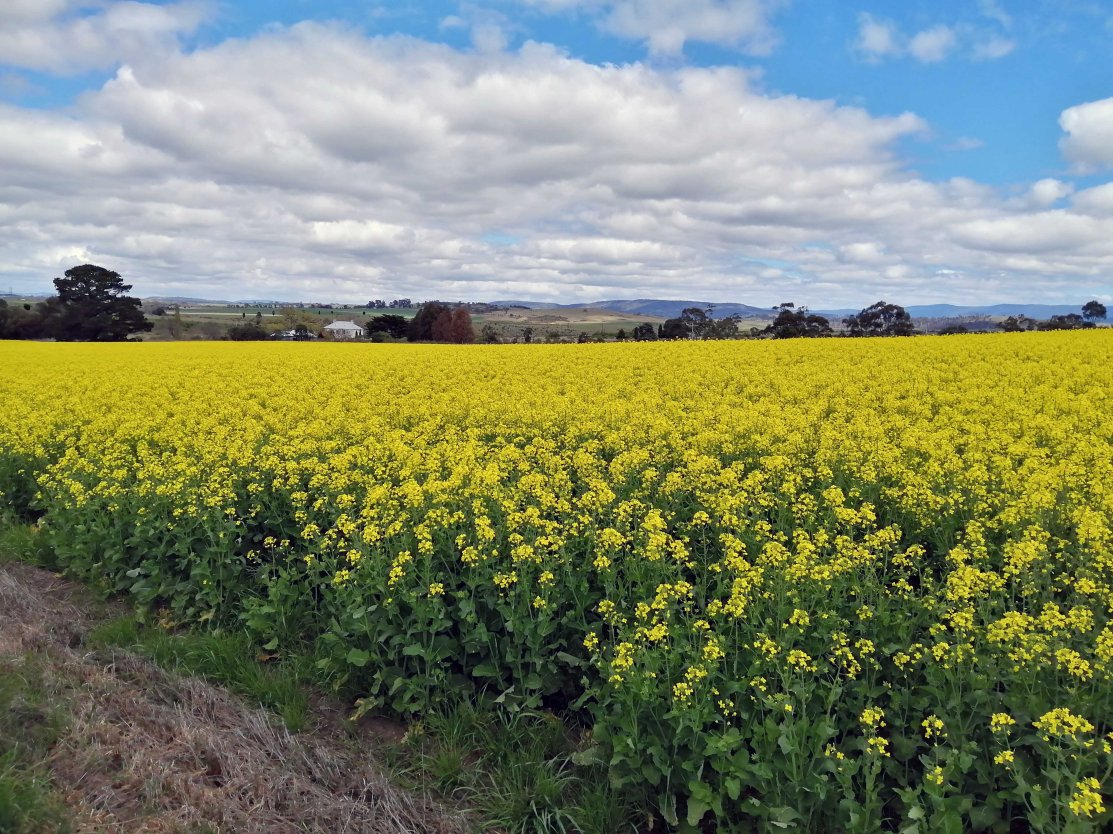 A burst of yellow – rape seed field near Campbell Town

The road from southern Tasmania to the North travels past fields rich with the happy brilliant yellow burst of rape seed, lush green pastures feeding the very happy sheep that produce some of the world’s best super-fine wools. Campbell Town, formerly just a horse and coach stop on the way from Hobart to Launceston, is now a convenient place to pause at Zep’s Café for a muffin or a great roasted beetroot salad with quinoa, rocket, goats’ cheese and caramelised walnuts. 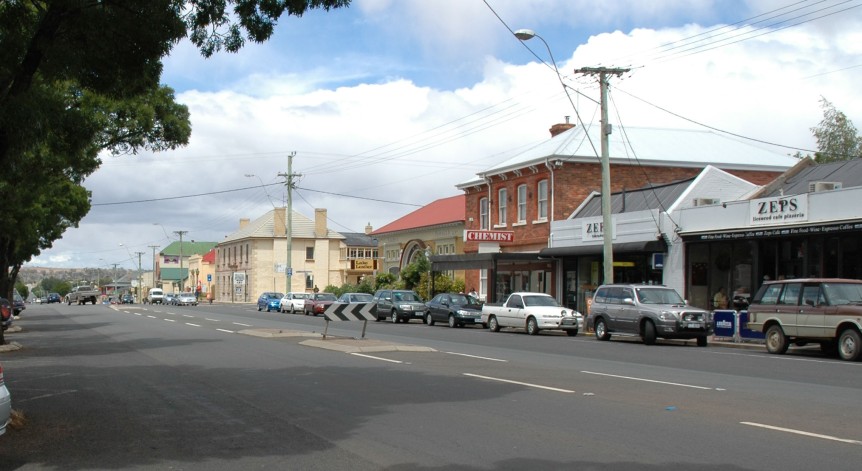 Many bricks embedded into this small town’s footpaths tell the story of the convicts who were sent from England as punishment for petty crimes. No caramelised walnuts for Mark Bunker, aged twenty-nine, who was sentenced to life imprisonment for stealing a sheep to feed his family, and who arrived in Tasmania (not Tanzania) on the Lady Castlereagh in 1818. 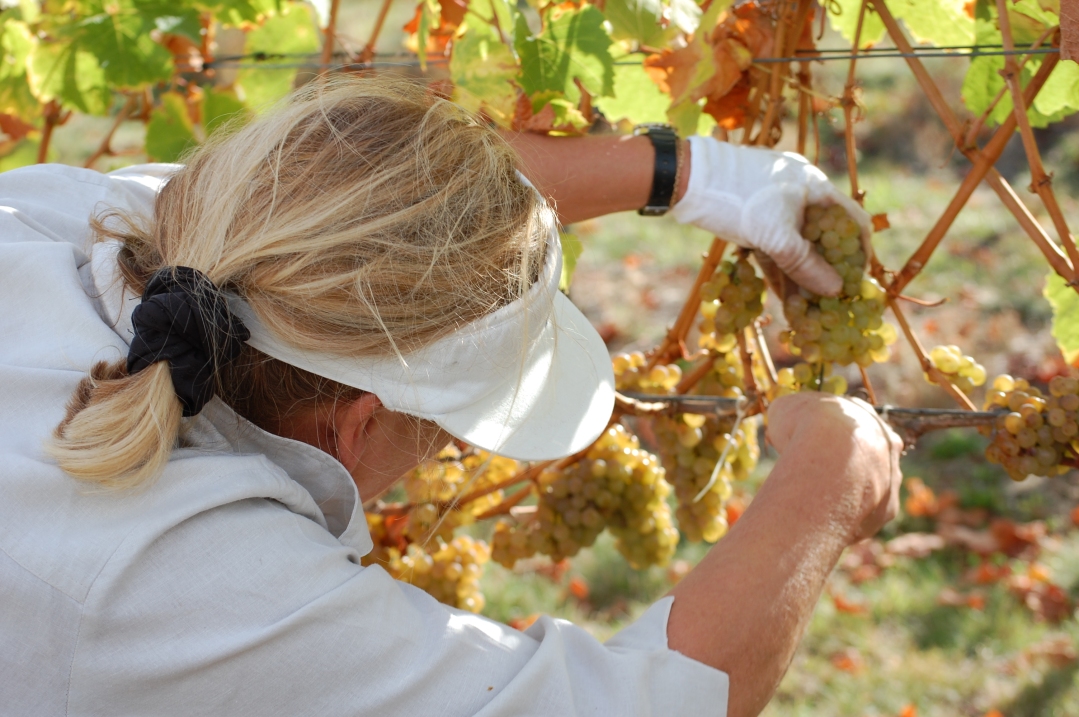 Scallops and great Tasmanian wines: of those 2500 Australian vineyards, there are about 250 in Tasmania (but apparently only one vineyard in Tanzania). My Bridport hosts owned a small vineyard producing award-winning bubbles and Rieslings just down the road from the slightly more famous Piper’s Brook Dalrymple Vineyards and their Pinot Noirs, Chardonnays and Sauvignon Blancs.

I visited the Clover Hill vineyard (see photo at left) and sampled several of their wines but neither my friends nor I particularly enjoyed them … so heigh ho! – off to Pyengana for some cheese and an absurdly extravagant ploughman’s lunch. If any ploughman had a meal like this every day he would soon need several horses to drag him – and his plough – through the paddocks.

A “small” ploughman’s lunch at the Pyengana Dairy

I probably had a similarly smug smirk on my face after a lunch with friends at the nearby Barnbougle Lost Farm Golf Resort restaurant. Barnbougle offers two golf courses carved out of the wind-swept dunes of Northern Tasmania, an airstrip for avid golfers to fly in, a health spa, a hotel, many bars for thirsty golfers to quench their thirst and a restaurant overlooking Anderson Bay, the fairways, and the eighteenth green. 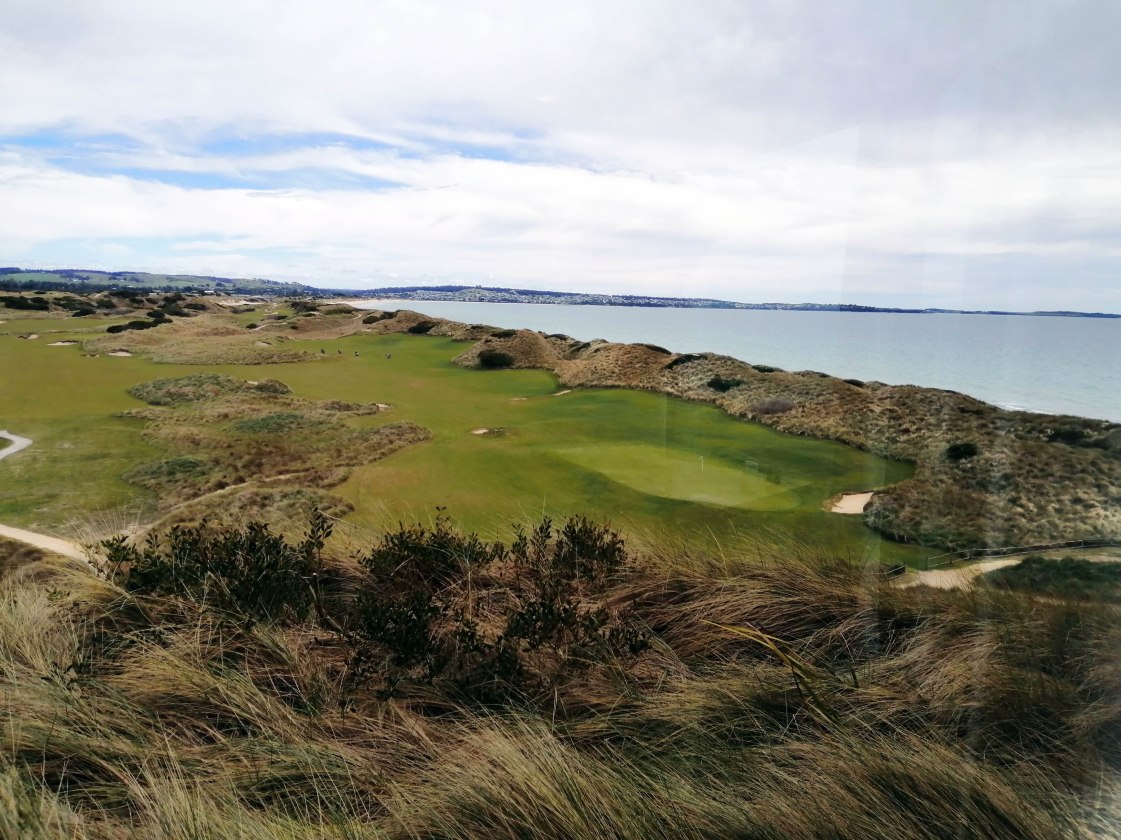 The 18th green from the restaurant at Barnbougle

Gins and tonics and local wines at hand, we chomped through generous helpings of rye bread, fresh local seafood and pumpkin dumplings … and watched the poor chaps trying to find their balls in the dense Marram grass.

Breakfast, brunch and dinner at three different places in Brisbane – or “Brizzie” as some of the locals call it.

It was off to the Farmhouse in Kedron for a great breakfast – poached free-range eggs, local grilled bacon, sour dough toast, Farmhouse relish and sides of grilled mushrooms and blistered tomatoes. The owners of this great place source much of their produce from local suppliers and farms, use biodegradable take-away food containers – all in an attempt to take the food from the farm to diners’ plates with the “least amount of fuss in between”.

If you are there later in the day there is a tantalising range of goodies for lunch including a shredded chicken and mint leaf salad, Chipotle pulled jackfruit nachos with cashew sour cream, and blackened whiting and watermelon tacos. 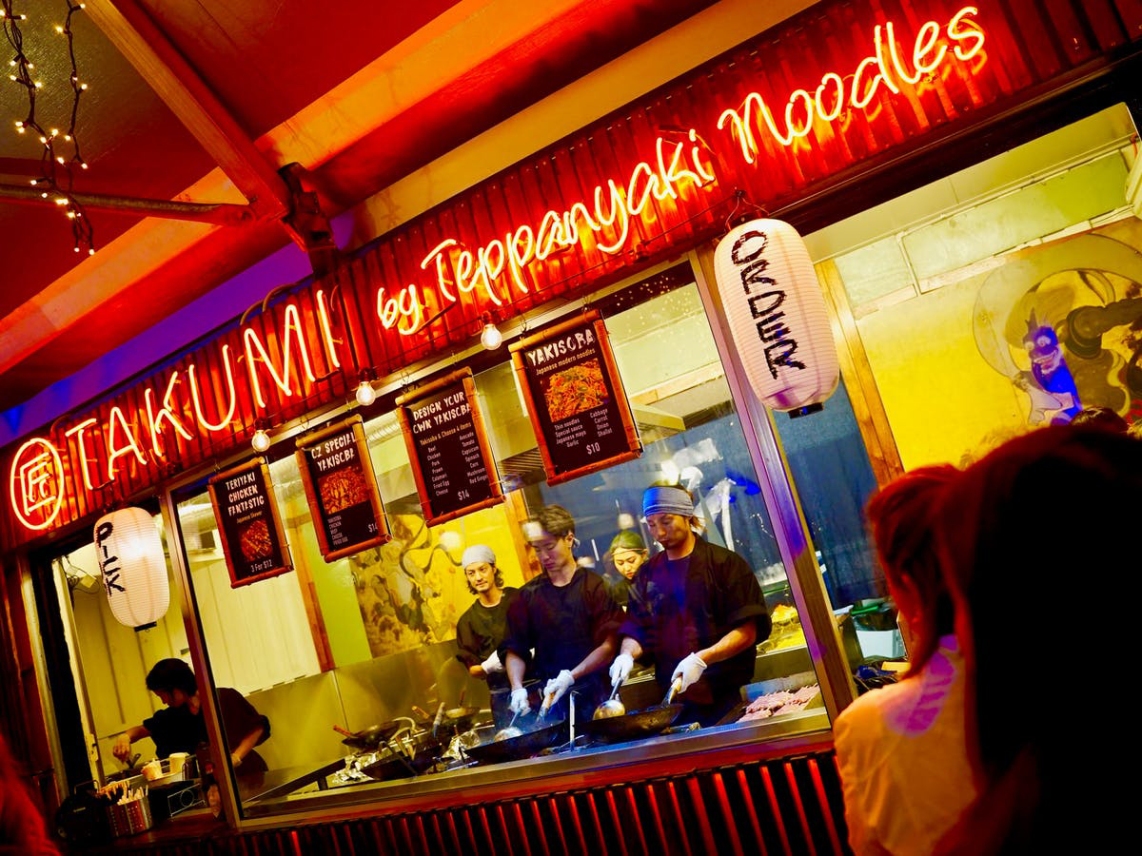 If none of these weekend treats appeals, head towards the Brisbane River and the delights of Eat Street Northshore, built on the historic Hamilton Marine Wharf, formerly the place where ocean liners and cargo ships docked when calling into the city.

Eat Street has about seventy vendors offering food from around the world. Try Little Octopus or the Dessert Depot, Khao Sarn Thai or my favourite – Marinade, where lamb is marinated for seventy-two hours then grilled and served in a bamboo cone with feta salad, balsamic vinegar, garlic yoghurt and dill sauce.

Perhaps you’d prefer curries, paella, dumplings, Tokyo gyoza, oysters, fish ‘n’ chips, or marshmallows from Miss Mallow and fresh ginger beer to wash it all down as you enjoy a stream of talented – and not so talented – performers on the various stages.

Dinner for eight of us at Beccofino was a very pleasant event where my nephew introduced me to the mysteries of Old Fashioneds which are apparently best when made with Maker’s Mark bourbon. The place was buzzing and we had to wait for a table but the Old Fashioneds help pass the time and the food and service were excellent reaching their peak for dessert when one of our group was served a calzoncino – a mini-pizza atuffed with Nutella and banana and served with vanilla bean gelato .

After blowing the diet sky high with two weeks of wonderful eating it was almost a relief to board my flight back to Thailand – where I was able to find in my local supermarket Australian Four ‘n’ Twenty meat pies which I later ate with loads of tomato sauce.

5 thoughts on “A couple of foodie weeks in Australia”