Milk please, and just one sugar

I went to Boston primarily to enjoy the famous autumnal (or fall) colours of gold and brown and green in the USA’s New England. Unfortunately, as my visit there was part of a much longer journey, I was probably at least two months early and I did not see a single golden leaf … but I did enjoy the sunny and green and historic city just the same.

Boston is not a city for those on extreme budgets.

When selecting a hotel I tossed up between the Four Seasons on the edge of the Boston Common at a mere US$650 per night … and a more modest hotel a couple of blocks away in the middle of the Boston theatre district at just US$180 night.

The Found Hotel Boston Common won out and was a surprisingly pleasant place for a few nights. Just half an hour by subway and walking from Boston’s Logan airport, the 1877 building housing the Found Hotel building was undergoing a massive restoration that made the rather tacky entrance a bit forbidding, but my room was comfortable and clean and offered a lovely view of treetops (none golden) and the neighbourhood. The single room had a tiny bed, a tiny table and chair, a tiny ensuite bathroom – and a huge window that opened onto the fire escape ladders.

As in any real estate deal, the location is everything. 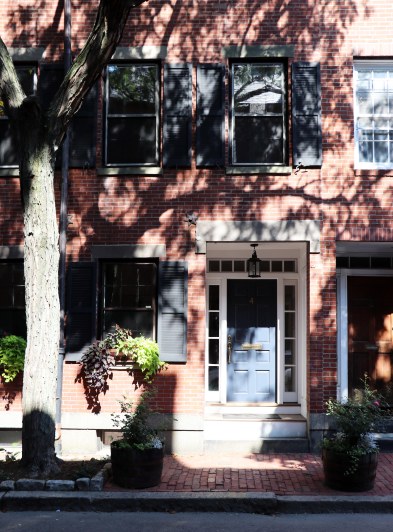 The poor chaps in the Four Seasons would probably have missed out on all the theatres, stand-up comedy venues, live-theatre cafes and other performing arts venues just steps from my hotel: the Wilbur, the Bock Centre Wang Theatre, Nick’s Comedy Shop and many more large and small places. They would probably have missed out on the beautifully sun-dappled townhouses of Melrose Street directly opposite my hotel.

The heart of Boston is surprisingly walkable – a six-kilometre square with its southern edge taking in the Found Hotel includes Trinity Church, Boston Common, the Bunker Hill memorial, MIT (Massachusetts Institute of Technology – Harvard is a little further north), the Charles River, the harbour famous for tea drinkers, the Old North Church and Paul Revere’s house – and of course all those theatres and the Four Seasons.

If you are not a keen walker then there is a Hop on – Hop off tourist bus that is great for getting an overview of the city – and then being tempted into pulling on your jogging shoes after all.

As I strolled – I did two quite long loops of seven or eight kilometres each – I was once again reminded of my bad timing:

The Rotunda in Boston Common – not far from the swan boats

However the fun 1877-era Swan Boats in Boston Public Garden – adjacent to Boston Common – were still in operation and packed with ornithologists and other swan lovers. The birds were scheduled to fly away for the winter on Labour Day but even so I was not tempted to sit paddling my feet for the fifteen-minute tour of the lake.

A Sense of History

It takes a bit more than fifteen minutes to catch up with the historical side of Boston.

Established by Puritans fleeing King Charles I’s England in 1630, it is the USA’s seventh oldest city and played a pivotal role in the development of the modern USA. 1630 also saw the founding of Harvard University (although England’s Cambridge University was founded in 1209). The grasping tentacles of the British Government caused dissent over heavy taxes charged resulting in the 1770 Boston Massacre in front of what is now the Old State House and the 1773 Boston Tea Party.

At the “Tea Party”, colonial settlers – including Paul Revere, Samuel Adams and others disguised as Mohawk Indians – dumped into the harbour 340 crates of Chinese tea belonging to that most corrupt of companies, the British East India Company. The raid was a protest against the British imposed Tea Act, allowing the company a virtual monopoly on the tea drunk in the colony. Some say the Tea Act was the final straw in a series of unpopular policies and taxes imposed by Britain on her American colonies. (1)

Yes – the British were indeed coming – not going to give up over a spilt cup of tea – or even crying over spilt milk. In 1774 colonial spies had learned of a planned attack on munitions dumps at Concord by the British forces. The site lies North West from Boston and could be approached by boat up the Charles River (“the sea”) or by a more direct road route.

Paul Revere’s famous ride, accompanied by the brief sighting of TWO lanterns in the spire of the Old North Church, mean that the colonists had plenty of early warning of the floating invasion heading up the river.

The Old North Church, where two lanterns showed the arrival of the British by “sea”

Revere was apparently a pretty busy man – dumping tea in the river one year, galloping off to Concord another day – and all the while maintaining his flourishing and prosperous business as a silversmith.

Just two short years later the famous Declaration of Independence was read from the west-facing balcony of the Old State House, just metres from the site of the Boston Massacre … and about two hundred metres from the Faneuil Hall market place where you can watch genuine original copies of the Declaration being printed – and even buy one for your study. 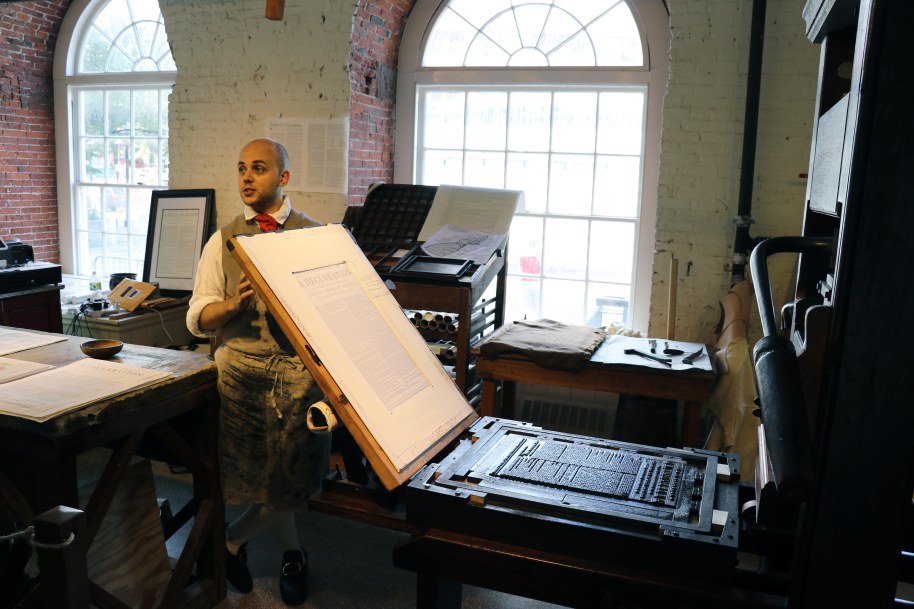 I wonder what she would say today in the light of the current President and his “Tweets” on British ambassadors, Lord Mayors and potential Prime Ministerial candidates.

After yet another shooting tragedy in yet another USA school, the current President of the USA suggested that violence in schools could be beaten by ensuring that all the teachers were armed.

What the gun lobby and Trump seem to have overlooked is that the constitutional amendment refers to a “militia”. The customary meaning of this word is “a military force that is raised from the civil population to supplement a regular army in an emergency.” Trump and the NRA (National Rifle Association) choose to see only the tail end of the amendment and take it to means everyone should be armed.

Is it not surprising that in Boston I saw signs:

… and on all too many street corners I saw numerous signs paying tribute to policemen and others who had been gunned down.

In memory of Patrolman Gannon

For a city based on a historical massacre, numerous skirmishes and battles and modern-day tragedies of serving officers gunned down, central Boston is, remarkably, a great place to wander.

If you head west along Melrose Street you come to the delightful Trinity Church and the Boston Architectural College –located in a re-purposed and historic fire engine station. Another old place given a face-lift and a new life is the old Arsenal – now, of all things, a branch of Smith and Wollensky’s chophouses, and located a stone’s throw – or a teacup’s toss – from the Boston Tea Party Ships and Museum.

Back on the trail, cross over the Charles on the Harvard Bridge, trot along Memorial Drive and onto the ornate Longfellow Bridge and turn right into Charles Street (see featured image at left) – an ancient narrow road, with gaslighting, shady trees and scores of bars and upscale restaurants. 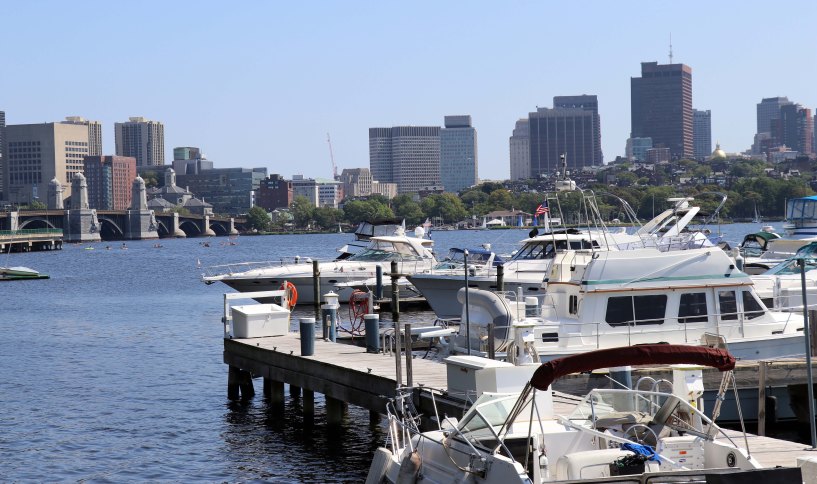 Go straight ahead from the Eastern end of the Longfellow Bridge – sometimes called the “Salt and Pepper Bridge” because of its ornate central towers – and you will come eventually to the 1826 Union Oyster House, the modern-day State House, the Old Granary Burial Ground (Paul Revere’s final resting place), the Old State House, Faneuil Hall, the Old North Church and Paul Revere’s house. 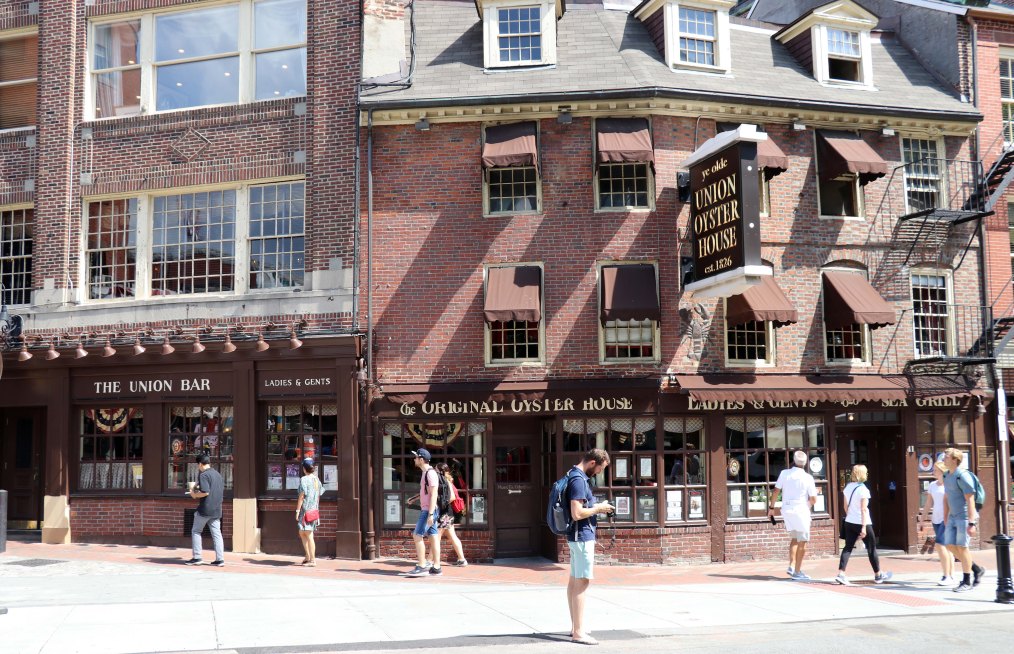 Jump onto the Metro at Haymarket and head North to Community College to visit the Battle of Bunker Hill Memorial and the pretty houses of Warren Street and then take the subway back to the hotel to give those tired feet a bit of a rest and for a restoring cup of tea. 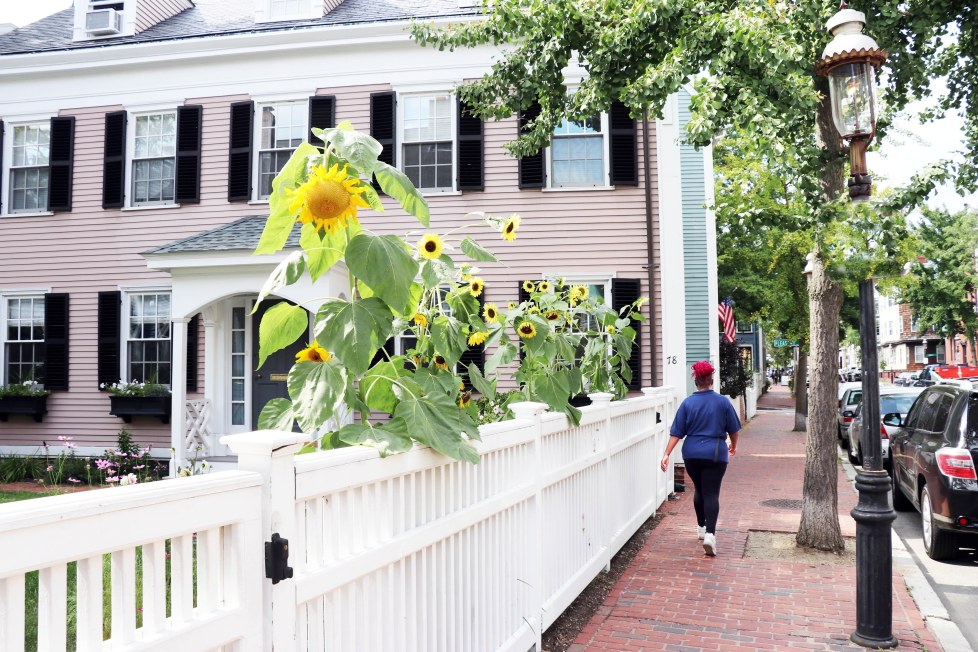 Milk please – and just one sugar

Detail of the Salada Tea Doors

A perhaps ironic reminder of Boston’s defining event is to be found – not at the harbour where visitors can enjoy pretending to be settlers and tossing fake bundles of fake tea into the harbour – but at 330 Stuart Street in Boston’s Back Bay district. The Salada Tea Company, a Canadian Company that set up in Boston in the 1920s, commissioned two huge doors to be cast in bronze. The panels depict Ceylonese tea plantation workers from the era at work picking and drying the tea leaves and preparing them for export.

Today if you want a good cuppa in Boston you could perhaps go to Abigail’s Tea Room in the Tea Party Ship Museum, where you can sip on the same type of tea that was dropped into the drink almost 250 years ago.

Perhaps I will get back to Boston some time in the next 250 years – and if I do so, I will make sure I visit Abigail’s and that I am there in time to see the fall colours of New England.