Perth: Lunch with the Governor

Perth: Lunch with the Governor 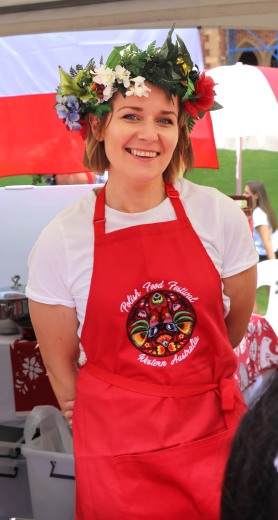 Polish woman at the Food Festival

Every year Government House Perth opens its extensive gardens to the public for a special treat – the International Food Festival. On this day, food stalls offer delicious and questionable and savoury treats from many different countries. When I had lunch with the Governor, he and I could have chosen from offerings from Poland, Brazil, Thailand, China, France, Austria, Vietnam, Holland, India, Turkey, Mauritius, Croatia, Italy and others.

A rather strange dance group from France performed a rather strange group of ethnic dances and a quartet of lederhosen and dirndl-clad Austrians performed yodelling songs as they played a piano accordion, a double bass and a couple of violins. I’d have preferred a bit of the old Bavarian oom-pah-pah stuff. They are neighbours, after all.

Joining the Governor and I were of course several thousand other people … so it was hardly an intimate meal with Kim.

HE Kim C Beazley AC OBE (see featured image) was appointed Governor in May 2018, after almost forty years in Australia politics. His most prominent political position was that Deputy Prime Minister of Australia and Leader of the Opposition. Beazley later served as Ambassador to the United States and is now in what the Australian Broadcasting Corporation (ABC) calls 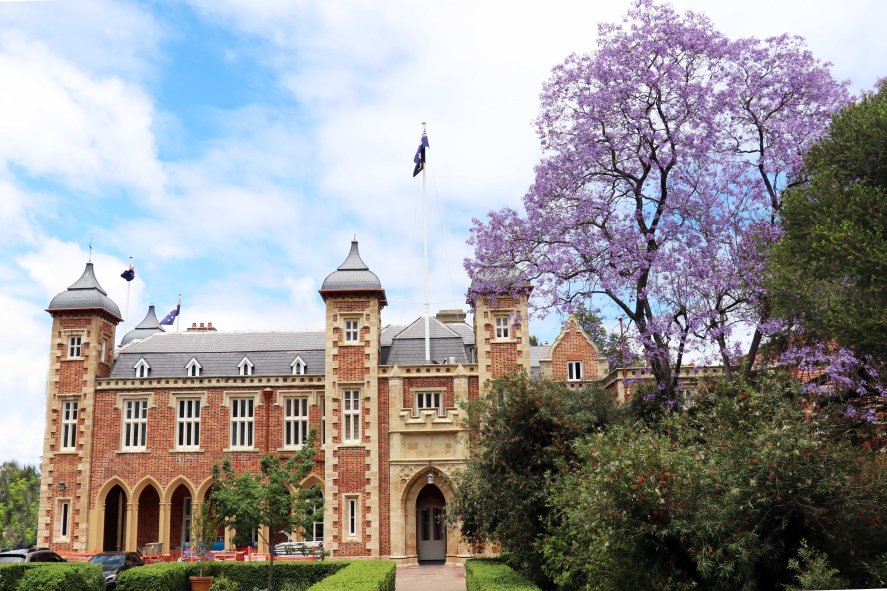 Kim’s new little pied à terre is an imposing 1860s cottage in beautiful grounds and surrounded by magnificent flowering jacaranda trees, but he did not invite me in to share a sandwich on the Royal Doulton plates or a glass of Margaret River bubbles in a Baccarat glass.

The Vice Regal residence perhaps used to sit on the bank of the mighty Swan River, but land reclamation and new highways now see it a little further inland but still in an imposing location near the new “downtown” of Perth and not too far from the gaudy neon piles of the Crown Casino – should he wish to try his hand at a different sort of Baccarat.

Gambling is a big industry in Australia – and elsewhere, of course. Australia is perhaps the only country that comes to a complete halt to allow people to “have a flutter” or to make or lose big bucks. On the second Tuesday every November, the Melbourne Cup is run and betting is almost mandatory in every office and every home. There are casinos in every State and Queensland has four of the beasts. The only thing that sets Western Australia apart in the gambling stakes is the fact that the only poker machines are located in the James Packer’s Crown Casino. Elsewhere they are in pubs and clubs everywhere … but not in the pub in Fremantle where I had a pleasant meal.

Fremantle – or “Freo” as the locals tend to call it in the same way that Brisbane becomes for some “Brissy” – is a pleasant drive along the Stirling Highway from Perth, passing through the pretty (and pretty expensive) suburbs of Cottesloe, Claremont, Peppermint Grove and Mossman Park.

For obvious reasons this area is known as “Millionaire’s Row”. Certainly Tuscany on the Swan, a huge Mediterranean pile by the river’s edge, reputedly owned by the family of WA entrepreneur Harold Clough, sets the tone for a few of the other large houses scattered along the river.

It may have been a different story seventy or so years ago following the fall of Singapore to the invading Japanese armies, when the most desirable residences were possibly those deep underground, below the World War II tunnels and the coastal batteries built between Perth and around Fremantle to protect this important port and harbour.

The Japanese never came – well – they did – but as modern-day tourists – and the harbour was not damaged. 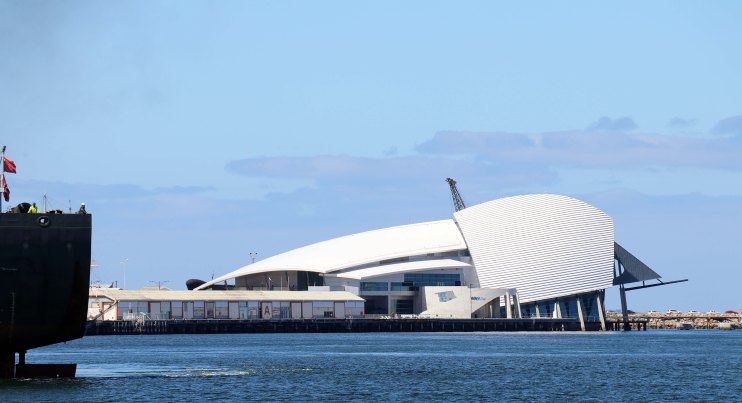 Drivers get their first glimpse of the white sandy beaches and the deep blue-green ocean just past these tunnels, and the cranes of the busy port prick the sky. The harbour is home to the biggest cruise terminal in Australia and annually handles millions of tonnes of cargo and perhaps almost as many tourists hopping off the liners to visit the striking Antarctica Centre or the famous Freo markets or the circus training tent. The Fremantle Arts Bazaar takes place at the end of November each year and presents works by scores of Western Australian craftsmen and designers.

By bus boat car and train

During my time in Perth I visited Fremantle several times – driving down and back by car, riding the bus down and taking a train back, and, en route to Rottnest Island, by high-speed ferry.

As the bus would its way through the huge QEII Medical Centre with the Sir Charles Gairdner Hospital and the numerous smaller medical facilities, I was intrigued to see a sign on the wall of the bus:

Having now trawled through some history of Perth’s bus-boarding expectorating men (sorry – not being sexist – it seems to be a male thing) I find reports of men in their mid-thirties spitting on bus drivers in 2009 and in 2011. Both these thugs were caught but another man spat at the driver in 2013. He was not caught at the time but on-board video cameras caught pretty good footage of him – so perhaps he is now languishing behind bars spitting chips.

Perth is, by world standards, a very modern city and was established by the British in 1829, a mere 190 years ago. However archaeological remains indicate that indigenous Australians have occupied the area for almost 40,000 years (2). The clash between the original inhabitants and the invading Colonists is seen strongly at Rottnest Island – see below.

Colonial Perth is – despite its sometime bloody history – a charming place with many old building lovingly preserved and in many cases repurposed. Perhaps not surprising some of the earliest buildings were law enforcement places: Fremantle’s Round House prison (1830), the Old Court House (1836), Perth Gaol (1856) and Fremantle Prison (1859) are just some of the early public buildings.

The 1860s Government House is still used as the official residence of the Governor, but 1892 Belaveda House is now home to a barber’s shop.  The mighty West Australian Trustee Office (Executor and Agency Company Limited) now houses the very elegant Churchill Bar. I popped in for a drink one afternoon but service was so slow I popped out again, still dry. In the heart of the city the elegant sandstone building that originally housed the Commonwealth Bank of Australia is now a shoe shop and a cheap jewellery store. 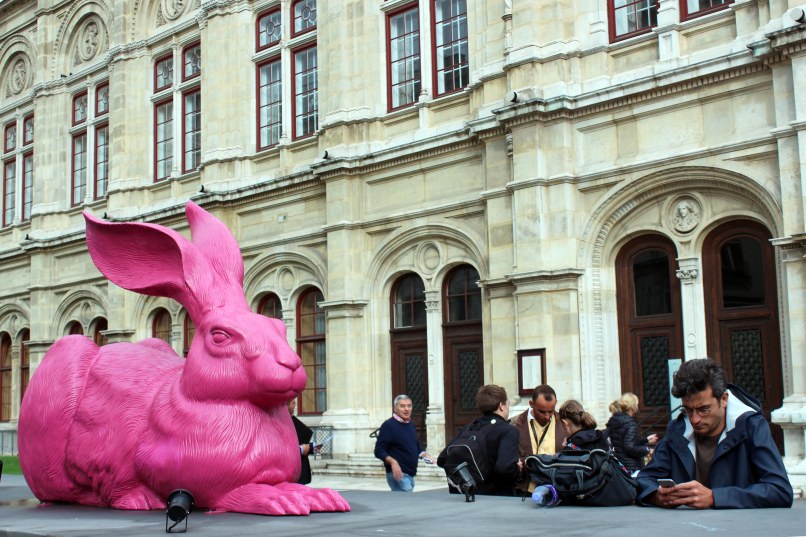 Pink Bunny, Vienna – similar to the one at the Girls School Cinema, Perth

The former Girls School (in operation from 1936 to 1962) undoubtedly closed it’s door’s because it was unable to under’stand the use of the apostrophe. This art deco building with pyramid-shaped roofs and striped columns had, when I was there, a giant pink bunny by its front door rather like the Jeff Koons rabbit outside Vienna’s Opera House. The Girls School is now the Girls School Cinema – still without an apostrophe.

The Salvation Army Headquarters was erected in 1899 “To the glory of God”. It now houses the Sahara Mid-East Restaurant – serving Halal food – and several lawyers’ offices. It might be argued that there is no longer much godliness about the place. After all, as WS Gilbert wrote in the 1893 operetta Utopia Limited

And there is the old Danish proverb:

The source of much of Perth’s and Western Australia’s wealth was mining – iron ore, gold, aluminium oxide, copper, lead, zinc and nickel have been dragged from West Australian soils by the millions of tonnes. However as world politics and world demands go up and down as frequently as Granny’s knickers, the mining bubble has popped and there are now many fine old buildings empty or plastered with FOR SALE or FOR LEASE signs.

Linked, perhaps, to the boom and bust economy in Perth are the numerous homeless people sleeping rough and relying on charities such as the Salvation Army and its Soup Kitchens. I saw one queue of about forty people lining up for their hot breakfast – perhaps their only hot meal for the day – of soup, sandwiches, meat pies and coffee.

Jill Porter, a volunteer on the soup van once a week, says she still gets a ‘buzz’ each time:

Whether the buildings are in use or not, Perth’s cityscape is enhanced by wide streets lined with plane trees and purple-flowering jacarandas and great Aussie eucalypts. There are many lovely parks and gardens, and here and there are huge clusters of purple bougainvillea.

The purple and blue waters around Rottnest Island are stunning. 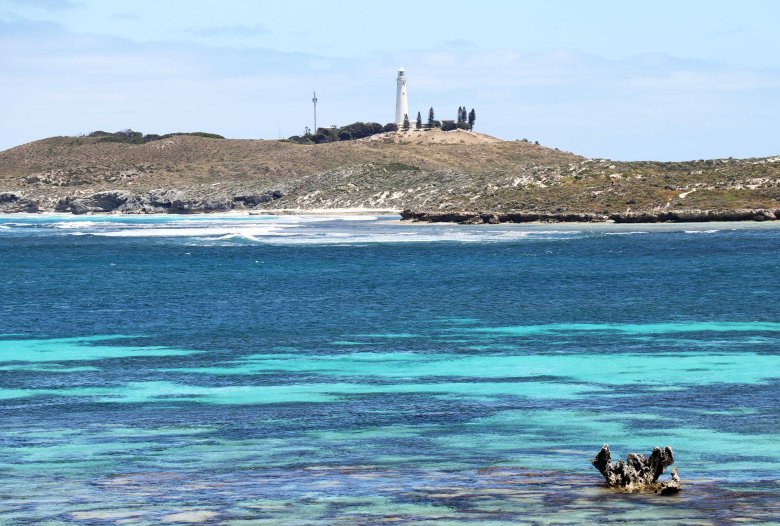 Several ferry companies take passengers either from city piers or from Fremantle over to the island, about twenty square kilometres in size and about twenty kilometres from the port city.

Like most of this part of the world, indigenous Australians – aborigines – had inhabited it for thousands of years until rising waters cut off the isthmus to create the island we see today. 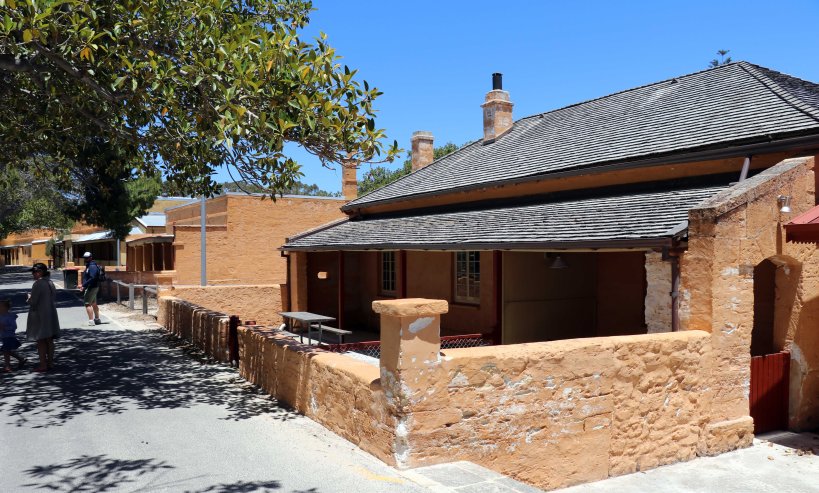 Today Rottnest is ironically a popular tourist destination, with people teetering on hired bicycles around the several roads that circle and criss-cross the island. I was lazy and did one of the short loops looking for a secluded bay or a secret beach where I could go skinny-dipping, but no such luck. Every little beach was populated with clothed sightseers and the beautifully crisp waters were cold enough to be used to chill a dry martini or an iced margarita.

I was attracted by the menu displayed at the gate to the Kama Resort but found that their actual lunch menu was not terribly inspiring. Back on my bicycle and back to the beach and so to the Rottnest Island Hotel for a great meal – no margaritas – but a crisp Semillon Sauvignon Blanc from WA’s Margaret River wine area and a slab of grilled barramundi served – strangely but tastily enough – with curried cauliflower, pistachios and raisins. 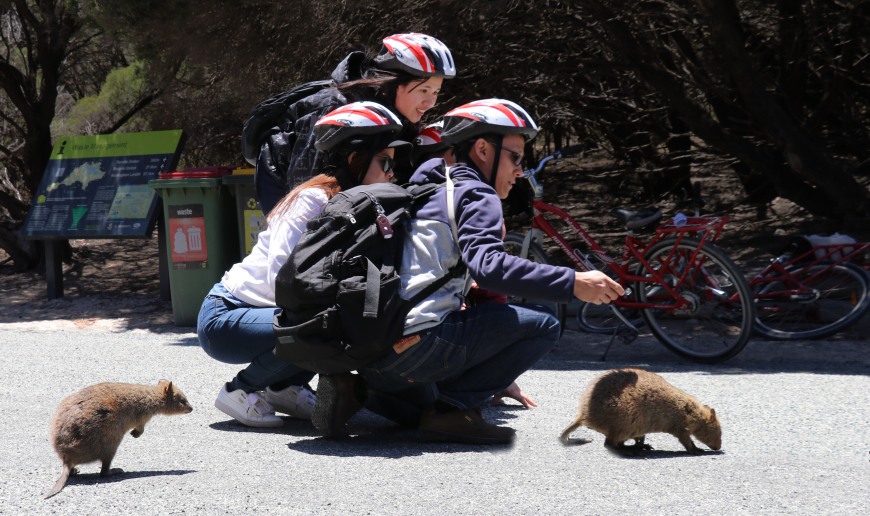 I am not sure if it was the wine or the fish or the pistachios that attracted the wildlife. Rottnest has some of the most aggressive seagulls I have ever found – landing on dining tables and snatching at food while diners try to stab them with their fish forks. Also toddling along underfoot, and quite unperturbed by the flying scavengers, were the rat-like earth-bound scavengers known as quokkas: small marsupials found in few places other than Rottnest.

I mentioned before that there is an irony in the tourist popularity of today’s Rottnest. From 1838 – 1931 it was yet another prison site – for aborigines. It is estimated that almost 4000 aboriginal men and boys were sent to the Rottnest prison for a variety of crimes, and that almost 400 of them are now buried there. 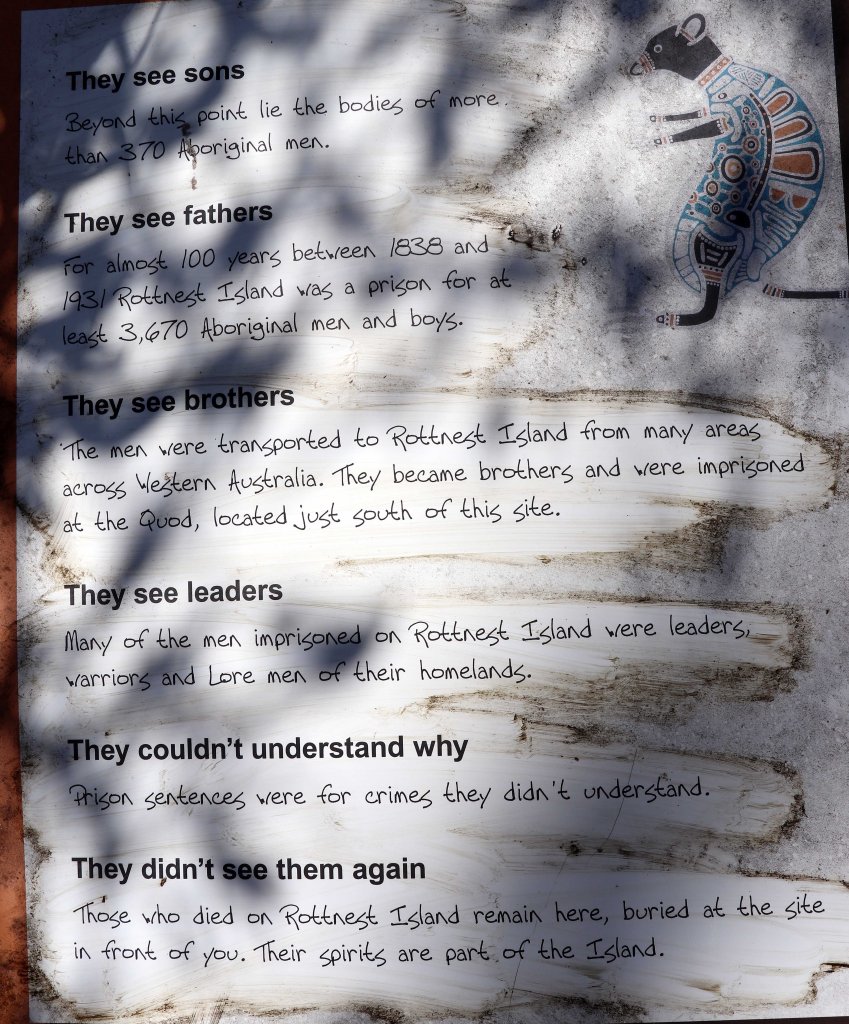 Near the burial site is a commemorative sign. It was filthy and I used a few tissues to clean it to make its story legible. A passing-by local called out:

Rottnest Island is known to the original inhabitants as Wadjemup – which can be translated as “The place across the waters where the spirits are.” With so many imprisoned and so many who died, there are certainly plenty of spirits to be respected – and perhaps the local authorities could start by cleaning the sign.

When I am next having lunch and a glass of Margaret River bubbles with the Governor, I might just mention it to him.

2 thoughts on “Perth: Lunch with the Governor”