As much as I enjoyed my brief time in Dublin, I think I found some of the nearby regional places more enticing. Perhaps this was because the crowds were smaller – a little – and perhaps because the atmosphere was more calm with no Papal hysteria or Papal bunting dominating every waking moment and every visual glimpse.

Before leaving Dublin I went on a pilgrimage of sorts.

A bus heads SW from the city past imposing country houses including one that is now the very luxurious St Helen’s Hotel in the suburb of Stillorgan.

St Helen’s was built in 1750, Mr Google tells me, and was the home of a Dublin barrister. It later became a Christian Brothers place and was listed in 1994 as a National Monument and is now a hotel: Torts became tonsures became tarts.

The bus carried on to Glendalough – or Gleann dá Loch – the site of an interesting medieval “monastic city” dating from about 600 AD to 1200 AD. See www.glendalough.ie

The site sprawls between granite-studded hills blazing with purple heathers, yellow gorses and dark wild blackberries. Rugged little mountain ponies graze the hills while Mayo Blackface Mountain sheep keep the grasses short in the lower areas between the two lakes that give the area its name.

Friends in Australia used to keep two Belted Galloway cows – named Ruby and Rosie – subsequently turned into prime roast beef – so it was lovely to see their Irish cousins gallooping contentedly in the fields in complete ignorance of what befell their colonial cousins.. 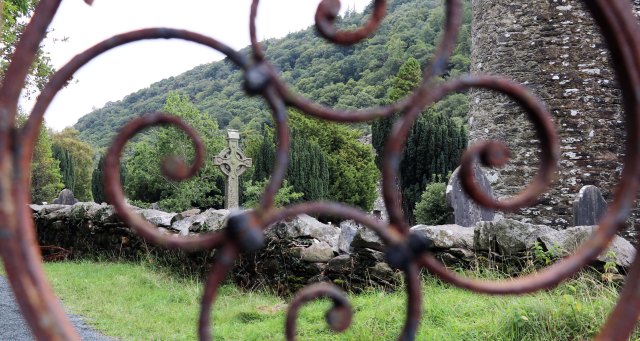 Celtic cross and base of the great Round Tower

The ancient cathedral at Glendalough is now a roofless ruin, but its walls of stone could no doubt tell many stories if only I could speak rocky Gaelic. The stunning Round Tower is still standing – with its entry door about two metres above ground level. Once again – in times of emergency – climb up to the door, pull up the ladder and close the front door.   Tupperware salesmen and itinerant cheeseparers looking for a cheap B&B beware!

There is a hotel at Glendalough catering for the visitors and the many walkers exploring the lovely lakeside and mountain-top hiking paths, but a couple of miles away – a gentle stroll through Irish mists – is the Wicklow Heather restaurant in the pretty little village of Larargh.

The Wicklow Heather is an immensely popular place for Sunday lunches. Inside there is cosy seating and walls dripping with antique prints, bric à brac, antique thingoes and whatsits, and outside there are two terraces. It seemed incredibly busy but the waitress told me that things were relatively slow as it was a rainy day.

The service was fast and the food was good – I had some local Wicklow beef – perhaps Rosie’s or Ruby’s second cousin – with Yorkshire pud and heaps of horseradish washed down with a glass or two of not so rough red wine and it was time to ooze back onto the bus to Dublin.

A day or two later, a train took me from Dublin’s Heuston Station down to Cork – travelling through lush countryside in forty shades of green – and perhaps just thirty-three shades of gold where crops had recently been harvested.

Windbreaks or hedges of mature trees separate many fields giving the countryside quite a pretty quilted appearance. I travelled on several Irish Rail trains and found that they were always on time and, with one exception of a blocked WC in one carriage, they were also very clean. A trolley service offered snacks and drinks, although on the train to Cork I had stocked up before leaving town so enjoyed my own snacks and a glass of wine as the land slipped by.

Cork – like Dublin and Cobh and Manhattan and Singapore and Penang and probably scores of other places – was settled on an island for security purposes. Pull up the drawbridge and the British or other marauding hordes can be kept at bay for a little while longer.

The English Market at Cork

Cork, with a population of about 130,000, calls itself “An Island of Discovery” with the River Lees flowing either side of the medieval town with its lovely old 1788 English Market.

Every second shop seems to be a barbershop – offering a full Turkish experience of hot towels and close shaves and who knows what else. Every other shop, of course, is a pub.

And on every corner is a church – the massive triple-steepled protestant St Finn Barre’s cathedral (https://corkcathedral.webs.com) (see featured image, left) dominates one part of town where I happened to find a stunning little boat yard – the Meitheal Mara community boatyard. 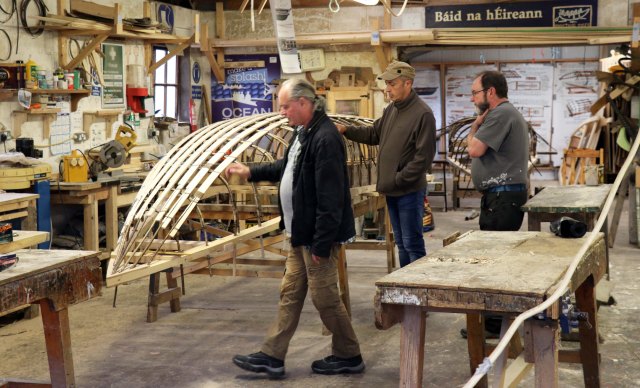 Inside, two or three old men were painstakingly building dunfanaghy or “sheep haven” curachs in traditional ways – with silver birch (I think) saplings bent into shape as the skeleton onto which long slats of other timber were fastened.

At first I was disappointed: the first gallery had nothing but rather crude (rough – rather than vulgar) plaster casts of famous statues, but then the other galleries presented a large array of works by Irish artists. Some were quite confrontational and remarkably frank, while others were challenging. I found Brian Maguire’s “Nature Morte” portraits of people murdered and beheaded or dismembered in drug wars in Mexico quite chilling.

Despite the graphic images found in the gallery, the old city is casual, relaxed and friendly.

Scattered here and there are the traditional mailboxes seen throughout Britain, with their VR monograms for Queen Victoria. However the Irish, proud to show their independence, have rather saucily painted their red pillarboxes a deep Kerry green.

Of course – off the island and into “modern” Cork the story may well be very different, but I saw nothing to cloud my rose-tinted specs. For some reason the name “the blessed Oliver Plunkett” rings all sorts of bells but I do not know who he is or was – so it was fun to find that there is a street named after this mysterious bod. Perhaps he was the saint of redevelopment – as great chunks of the city are being renovated.

I stayed at a small hotel up a hill looking down to the River Lees and the Cork railway station. The staff and the welcome were friendly and helpful and offered lots of good hints for exploration. It was thanks to Cyril at Emerson House that I found myself heading off to Cove (Cobh in the local tongue) and Midleton – with just one “d”.

Midleton is famous for its Jameson’s whiskey distillery.

The old distillery now offers excellent tours during which the process of making the local booze is very well described, and guests are offered a tasting session of Irish, Scottish and Kentucky whiskies. Of course, the Irish drop is sampled first to make the greatest impression on the palette – and liver – then Johnny Walker Black comes a’marchin’ in … followed by his USA cousin Jim Beam. I have to confess that my preferred drop from those very generous tasting glasses was the JW Black Label.  At the end of the tour, guests were offered a bigger slug of the local drop – on ice, or as a cocktail, mixed with this and that and served as a refreshing long drink.

So while I had a couple of slugs of Irish whiskey while I was in Ireland, I did not sip the old black magic of Guinness until I was stuck in the Air Canada lounge at Montreal, where it was on tap. Half an inch in the bottom of a glass was quite enough.

And half an hour is enough to see all that Cobh / Cove has to offer.

Cobh is set on “Great Island, while nearby there is a village of Littleisland (sic) or An tOileán Beag. Cobh is now a popular holiday resort with strong-legged visitors legging it up and down the steep hills surrounding the harbour.

Tiny houses creeping up the hill at Cobh

Historically an important maritime town, Cobh has links to the Lusitania and the Titanic, and many convicts were sent to Australia from this port. Now Australians return as freemen on ships such as the Mein Schiff 3. This floating ten-storey cruise ship towered over the harbour when I was there and poured its passengers into the town’s pubs. As this ship has about one thousand crew and about five thousand passengers, its arrival at any port must be a huge – HUGE – injection of funds into the local ice cream sellers’ pockets.

Who pays the ferryman? Everyone at Cobh!

Ferries cross over to Spike Island – the local Alcatraz – to see more monastic ruins and the old fort erected there. The island’s website (islands have websites these days? Whatever next!)(www.spikeislandcork.ie) reveals it has had a history that has included

A train came to take me back to Cork and another took me back to Dublin as my time in Ireland came to an end. I had seen enough monasteries to last me a long time, I had seen one bunch of monks trotting up the hill to wave at the Pope, and I had seen one man whose bruised and battered face and purpled eyes spoke of past jolly riots. I am sure that somewhere, sometime, I had passed a saint or two and perhaps a sinner or two. Who knows?

That’s Ireland for you.

One thought on “Ireland – further afield”