Not so long ago – OK – it was half a lifetime ago – I was a soldier in the Australian Army. Her Britannic Majesty had decided that she needed me and all other Australian men born on 12 April that year to serve her, the greater glory of god, and the indomitable spirit of my country as we went “All the way with LBJ” to defeat the Communists storming down the Vietnamese countryside waving the wonderful French baguettes found in Hanoi.

For a year or so in the 1970s I learned how to drive a bayonet into an enemy soldier, how to twist it and pull it out, how to withstand sensory deprivation at the hands of the Viet Cong if captured, and how to say in Vietnamese “That’s fine, thanks, but could I please have another helping of fried dog with my rice?” 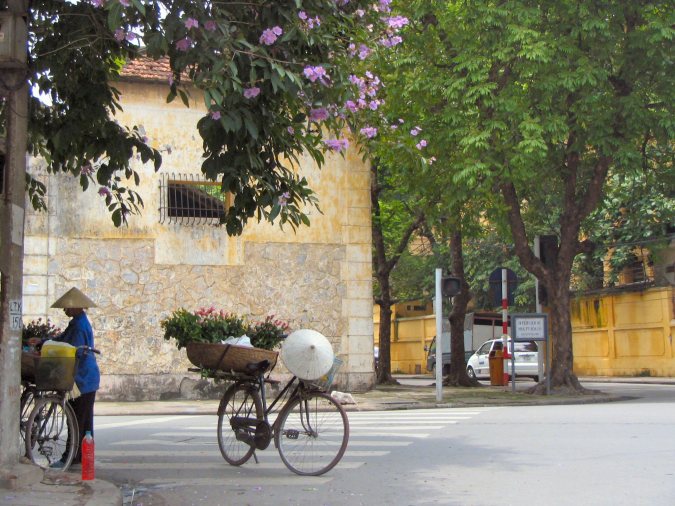 Despite intervention by Australian and USA troops and soldiers from other countries, the Communists won in Vietnam.  Despite many turbulent years today the unified country seems to be a well-governed, peaceful place enjoying significant economic growth. Of course, a casual visitor who does not speak the local language can only gain a superficial impression and who knows what lies beneath the surface for the people of this country? 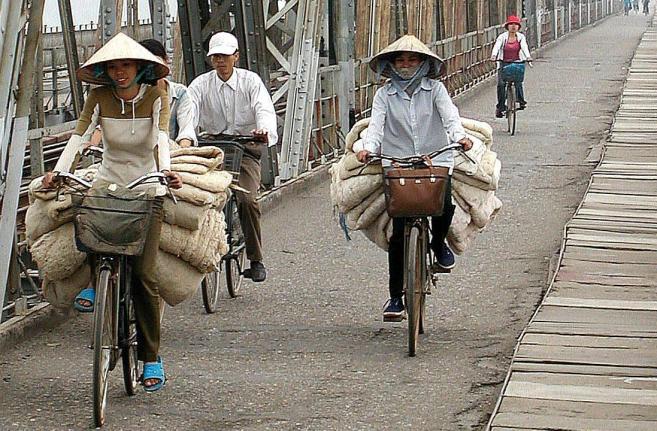 Again, who knows what was going through the mind of the man about my age, wearing some sort of USA-military cap, I saw standing deep in thought on Hanoi’s Long Biên Bridge over the Red River? During the American War this bridge was repeatedly bombed by the USA and repeatedly rebuilt by Prisoners of War. Was this man one of the bombers … or one of the prisoners who repaired it and rebuilt it every time it was damaged?

In HCMC I usually stay either at the lovely old Colonial Continental Hotel next to the Opera House, or the equally charming Majestic Hotel.  Each of these hotels was popular with British writer Graham Greene, and each features in the superb film based on his novel The Quiet American. Greene stayed in the Continental’s Room 208 at one stage and the film with Michael Caine and Brendan Fraser was filmed outside my “opera view suite” … but not while I was there.

Outside Hanoi’s lovely Opera House I recently spotted an elderly English chap in linen suit and scarlet foulard being crazily and dangerously transported in a cycle rickshaw. I could not see who was at the business end of the machine, but cameras and sound booms suggested that it was part of a film. I later learned that the linen-clad chap was British writer, theatrical producer and talent agent Michael Whitehall … and that the maniac who was nominally in charge of the three-wheeled death machine was Jack Whitehall, his son, an English comedian.

Despite the rout of the French at the Battle of Dien Bien Phu in 1953-54, Hanoi is still very French in so many ways. When I recently checked into the De Syloia Hotel (www.desyloia.com) the doorman greeted me in French (although he was carrying and studying a huge English-language dictionary), and Hanoi’s bakery products are some of the best in Asia – although Cambodia’s bakeries are also pretty good.

Many restaurants feature menus in French and Vietnamese  with traditional French dishes scattered through a more Asian-style of food. Traditional Vietnames spring rolls feature on just about every menu.  A French wine list is, of course, de rigeur. Flying in the face of tradition, one wine shop I visited offered a bottle of the excellent Australian Penfold’s St Henri Shiraz at 3.8 million Vietnamese Dong – or about US$170.00. In Australia, depending on the vintage, the same wine is usually about US$65.00 – US$100.00.

At one place, however, no matter how Francophile its management may have been, the waitresses were all clad in the beautiful and traditional áo dài – a long, body-hugging silk coat worn over floppy trousers. (See featured image and below)

From the water puppet shows presented at several theatres and hotels in Hanoi and HCMC, to Miss Saigon songs at the HCMC Opera House (nice sense of irony here), entertainment of some sort is not far away. There are street musicians on the promenade around Hanoi’s superb Hồ Hoàn Kiếm (Hoan Kiem Lake) where you will also find Tai Chi classes, joggers, families and lovers taking the afternoon air.  There are bicycle vendors with ear-shattering portable public address systems. And an occasional man just sitting there, thinking.

Its Old Town represents a vibrant picture of an Asian trading port.  The city, its narrow shop houses, historic bridges over canals, fishermen somehow managing to control round fishing coracles, streets lit with tens of thousands of paper lanterns, and scores of wonderful Colonial buildings all make this an exciting and enjoyable place to spend a few days … unless you lose your motorbike keys.

I do not know why I ever hire motorcycles or scooters, as they do not agree with me. I either fall off them, they break down or they get flat tyres. Or all three.  They have even been known to secretly eject their ignition keys while I was driving along.

I did not know that this had happened one day in Hội An until a combination of a flat tyre and almost running out of petrol made me pull into a road-side lean-to to effect repairs. As the keys were gone I could not turn the bike off. We repaired the tyre with the engine still running and the petrol still getting lowers, and I retraced my route, despairing of ever finding a single motorcycle key in the twenty or so kilometres of muddy roads I had travelled.

There must be a god of lost motorcycle key, Daphne, as I frantically scanned the mud, knowing I was wasting my time … but then …

But yes, my one tiny key was attached for reasons best known to the hire company to a small pink plastic lobster claw … and there the claw was, half-submerged in the slush, but with a tiny bit of pink gallantly waving its tiny pink lobster fingers at me! 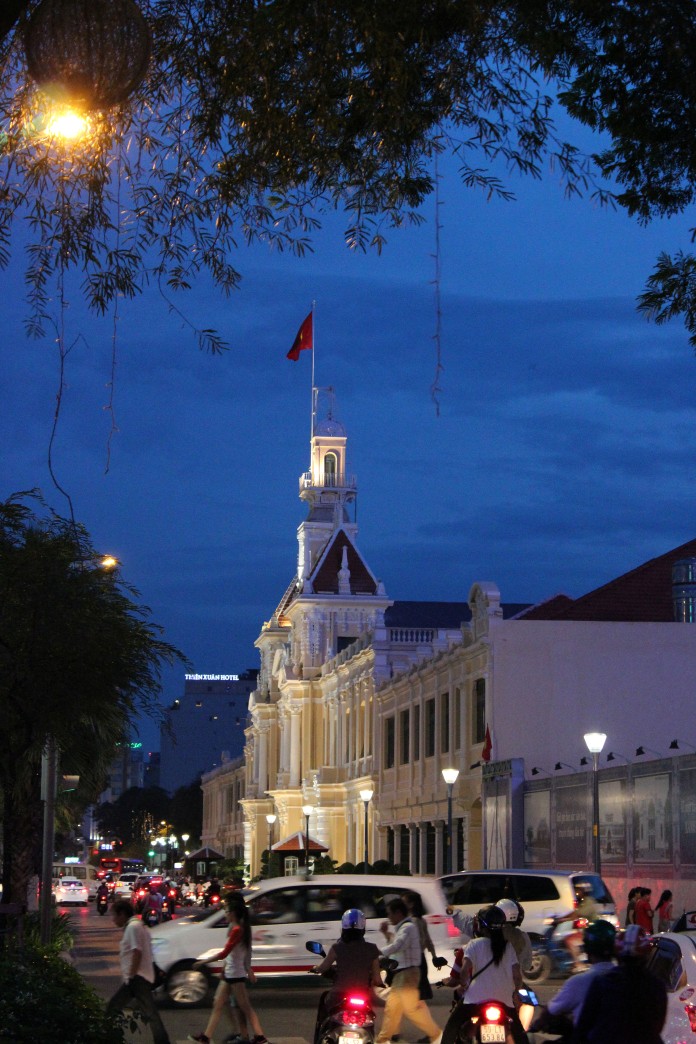 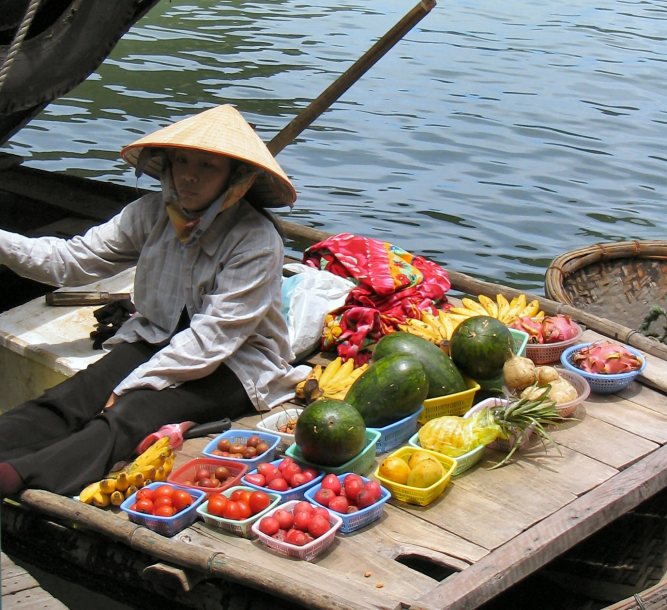 Whitehall photograph from the Internet