At first glance, Chiang Mai in the far north of Thailand and Avignon, in the far south of France, do not have much in common at all. True – one has streets that are littered with dog droppings, discarded ice cream wrappers and other tourist detritus, while the other has freshly-swept streets and flowering trees. One has ancient city walls that are almost intact while the other has ancient city walls that exist today only in several small chunks.

Avignon is the dirty city with about four and a half kilometres of restored city walls totally encircling the Old City – and Chiang Mai is the place with fragments of the former 7.5 kilometre city walls but relatively clean streets – thanks to cheap labour and the many street sweepers who meticulously sweep up every dead leaf and careless cigarette butt.

The walls of both cities have been damaged by age and by pollution – and by military battles. Chiang Mai suffered at the hands of invading Burmese many years ago, while Avignon’s walls suffered significant damage by bombing during World War II. In this instance the invading forces were blameless, as British and American bombers caused the damage in 1944 when they bombed the city, damaged the walls and killed 525 people in an effort to regain the city.

Avignon – like Chiang Mai – used to be surrounded by a city moat outside its fortress walls as part of its fortifications. Today the moat has disappeared under new buildings and roadworks. In contrast, Chiang Mai’s moats are in excellent condition and completely circle the city. At festive times and during hot and dry and dusty times, the numerous fountains in the moat make it a particularly attractive – and cool and breathable – part of the city.

Although Chiang Mai’s city walls are much longer than their French cousin’s walls, there are only five fortified gates leading through the walls into the Old City where about 20,000 people live today. The “intra muros” inhabitants at Avignon have things pretty easy – with at least fifteen historic gates – and a few additional holes punched through the walls where road builders decided they needed additional access for modern traffic.

There are traces of much earlier settlements at both locations – indeed the French city can claim some sort of human habitation from as long ago as the First Century BC – but the existing or “modern” cities in each place date from around 1290 or 1300. Chiang Mai was founded on my birthday (12 April) a mere 727 years before I popped out to say “Hello!” to my mother and father. Both cities also boast erratic footpaths – when, indeed, there are footpaths. The footpaths in both places meander here and there quite happily, offering sight-seeing happy pedestrians safe, comfortable and secure footing while they amble along. And the footpaths of both cities occasionally just stop unexpectedly and the pedestrian finds himself facing a dead-end wall or a hurtling wall of traffic.

The Rhône is still spanned by the much-vaunted Pont d’Avignon featured in the 15th Century song:

Actually, the bridge’s proper name is the Pont St Bénézet and in case you were wondering – as I am sure many were! – Saint B lived in the 12th Century and according to www.catholic.org was the founder of the tradition of bridge building. I wonder what the ancient Romans and Greeks would have said about the Roman Catholic church’s claim that Saint Ben was the founder of bridge building traditions …?

And I am also told that people did not actually dance ON the bridge … but UNDER it. Hmm. Perhaps the ancient folk of Avignon were mermaids and mermen … or perhaps there was a suitable dancing plot of earth under the bridge as well as the river.

Today it is still possible to dance under the bridge (dodging vehicular traffic on the roads and rapidly flowing waters of the Rhône) but if you want to make an absolute fool of yourself and dance ON the bridge you can still do that, too, after paying the whopping EUR 5.00 entry fee.

No entry fees are payable to dance on any of the bridges in Chiang Mai.

None of them is quite as old as the famous French bridge, but there are several that have great character just the same. The old Iron Bridge is a narrow bridge across the Ping River and is indeed made of iron. It is a one-way rickety structure and links the Old City with the sprawling suburbs on the Eastern shores, as does the more festive Nawarat Bridge. During major festivals – such as Songkran (the Thai New Year in April) and Loy Krathong in November – Nawarat is a centre of floral displays and processions of floral floats laden with beauty queens and muscular young men, a place of fireworks, of tiny floating rafts (krathongs) of candles and incense and old coins, and – yes! – I have seen people dancing over the bridge.

Large luxury river cruise boats motor slowly past the remains of the bridge in Avignon (they do not pass under it) and moor just a kilometre or so down stream to allow the passengers to visit the superb Old City of Avignon – the Palais des Papes, the many museums and the lovely Place de l’Horloge – before returning to their bedroom on water for another overnight jaunt to the next city along the Rhône – Viviers, perhaps, or Arles.

There is not much luxury involved in a cruise of the Mae Ping River under the bridges of Paris Chiang Mai with me – but then I am sure not too many French people have ever ridden in a scorpion-tailed boat.

This is one of the most popular forms of river transport in Chiang Mai – a small low-slung boat with perhaps twenty wooden benches a few inches above the water level, and a huge old V-8 engine (or similar) clipped to the rear of the fragile vessel, and with the drive shaft connected to a propeller rather than a pair of truck wheels. There is certainly plenty of “sting” in the tail of these boats which can surprisingly putter along quite quietly … or can tear through the water hyacinth at a great speed and an even greater volume of ear-wrenching noise.

To escape the noise of rowdy bridge dancers and screaming boats, a quiet stroll into the heart of the Old Cities of Chiang Mai and Avignon is like taking a step into a time when the pace of life was slower, when streets were not clogged with cars and when McDonald’s cafes and 7-11 convenience stores did not litter the street corners.

Avignon is one of France’s smaller cities with a population of just 90,000 people, and is dwarfed by Chiang Mai’s one million or so, but the small lanes and streets in both Old Cities are frequently too small for any modern vehicle other than a bicycle or a motor scooter. Strolling through each city is an olfactory kaleidoscope as jasmine, incense, stir-fried food, locally hand-made soaps, lavender, oleander, an occasional over-flowing drain, an occasional over-scented foreign tourist and a hot plate whipping up fresh crêpes all add to the fun – and the excitement of turning a corner and finding a new scent – as well as something new to see. The new sight could be one of the excellent museums or galleries each city boasts – the Lambert Art Museum in Avignon has a superb contemporary collection while the galleries along the riverside in Chiang Mai feature exciting works by local, Burmese and Chinese artists. 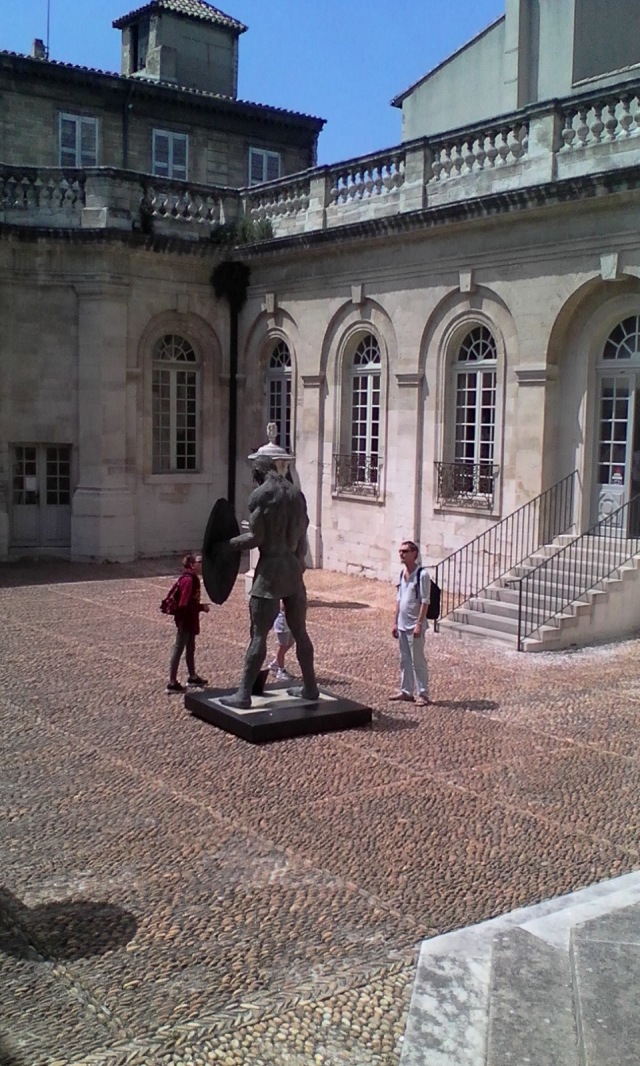 The interior quiet of the Old Cities is punctuated by melodious strains of organ music or church bells from the many churches, and by the chanting of monks and the ringing of gongs and chimes from the numerous Buddhist temples. Less melodious are the raised voices of package-tour English and American and Chinese tourists following tour leaders with raised yellow parasols or brightly coloured flags on poles even longer than the tourists’ selfie sticks. The sounds of Honda scooters with damaged mufflers are not so welcome but the Twelfth Century churches and Wats seem to co-exist quite happily with modern visitors whose mobile telephones’ strident tones seem to jar more than raised voices or deranged engines.

Chiang Mai and Avignon both rely heavily on tourism – and while the pre-paid, pre-packaged, loud, floppy-hatted hordes of Chinese tourists often dominate the Thai city, its French cousin is inundated by mid-west matrons from Minnesota and Missouri disembarking from the Sapphire Princess or the Viking Heimdal moored on the Rhône, and by the hordes descending on the town from the very smart new (2001) TGV station at Avignon or the slightly shabbier Avignon Central railway station or “gare”.

To cater for these tourists Thai street signs and many other signs are often written in the almost unreadable Thai script as well as the more visitor-friendly English language … but of course in France there is always and ever shall be and always has been just one language.

There is, of course, no need for any non-French to learn French or non-Thai to learn the Thai languages) as the locals will always speak English, especially if you speak to them in a loud voice, with lots of hand gestures and an increasing level of hostility and presumption.

Duke Orsino says in Twelfth Night written by the greatest exemplar and inventor of the English language, William Shakespeare,

And so while English and music and love may all be found in both walled cities, I don’t think I could ever have too much of either. 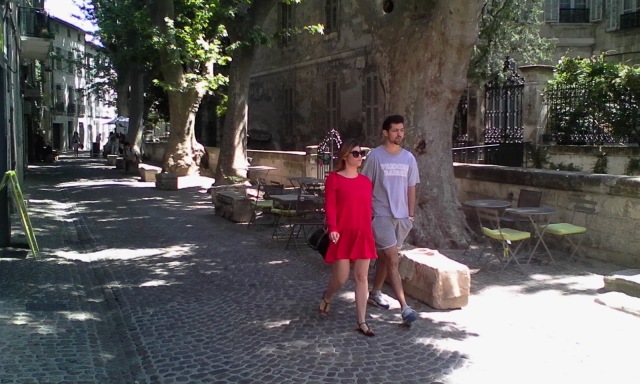 If you enjoyed this story please scroll down to see earlier stories and forward the blog address to your friends: http://www.hallomega.com

One thought on “Two Walled Cities”