(Caution: this blog is a little rude in one section … Read on if you must …)

I have worked out a way that hotels around the world could save millions of dollars!

Hotel housekeepers everywhere almost always ignore the fact that guests usually DO hang up their bath towels and are quite happy to use the same towel more than once, but on a recent trip I had four fresh towels given to me every day for fourteen days …

Over the last few years I have visited quite a few of Thailand’s marvellous islands – big and small – and most recently spent a couple of weeks on the biggest of them all: Phuket in the Andaman Sea.

Phuket is an island of great variety and great joie de vivre.

On previous visits I stayed in different areas. One visit was to a very small beach bungalow place with only basic facilities – but a superb location right on the beach on the North West coast, with miles of undeveloped beaches in either direction. Sadly there are now elbow-to-elbow resorts along the same stretch of beach and it is harder to find solitude.

A quiet pathway at Phi Phi

It is impossible to find solitude on Phi Phi Island – location of the film “The Beach” starring that fat little Italian in the movie of Alex Garland’s 1996 great novel.

There were, at a quick count, seventy million grains of super white soft sand on the beach … and every one of those grains had about three people standing on it. No one was lying down – there was not enough room. A short distance behind this beach is a narrow bamboo walkway and a couple of ladders leading to a small viewpoint.

Have you even been in a Tokyo subway train at 5.00pm on a Friday night before a long holiday weekend? I can recommend it, as it is more relaxed and spacious than that little walkway to the lookout on Phi Phi.

However, not too far from this cannery row, we stopped an hour later in a deserted cove – a really peaceful place with just one other small boat moored there – for some snorkelling amid clouds of colourful fish.

It’s a long time since I swam on Australia’s Great Barrier Reef – sadly facing massive bleaching as water temperatures rise – but this little Phi Phi cove was superb with angel fish, rainbow parrot fish, oriental sweetlips (I used to know a girl called that!), a coral grouper and even one small puffer fish.

The hills are alive with the sounds of …

My hotel back on Phuket was the comfortable Novotel at Kata Beach in Phuket’s South West corner, and like that puffer fish on Phi Phi, I was a bit of a puffer as I slugged it out up the steep slope to the hotel from the lovely family- and kid-friendly beach. As most of Thailand’s islands are the result of volcanic activity they are very mountainous with most hotels perched on hilltops. Bright-red-faced flocks of Puffing People can be seen and heard going back to their beds after a day of being grilled on the beach.

“The Beach” was not one of the novels I found in my hotel’s little library, which had eight shelves of Scandinavian novels, one shelf of Russian novels and just two shelves of English novels – most of which were in German.

During my Phuket visit I did meet some Australians, but by far most of the visitors to the Kata region were German or Russian (most shops have signs written in Cyrillic) or Scandinavian – most of whom were built along the lines of Mr Goodyear’s balloon, and looked as if they were rejects from the Hollywood studio for the film based on JK Rowling’s new novel “Fantastic Beasts – and Where to Find Them”.

I now know where to find them – just go to Kata Beach.

A few kilometres up the coast is the infamous Patong Beach. Again, this area is very different from the rest of the island as it is inhabited by oncological growths of Touristicus Voluminous Asiaticus – or in plain English, loud Chinese tourists, all wearing vast wobbly straw hats, acres of printed floating panel dresses – even the men – and talking at a volume that ensures that their voices can be heard by those left behind in the rice fields of Xian.

The beach at Patong is actually quite nice – but the tawdry reputation the area has earned comes from just one street, really – Bangla Road.

Yes mum, I am really having fun

Bars, bars, tattoo shops, strip clubs, bars with sad, tired, underclad women slowly gyrating around and up and down firemen’s poles on top of bars, street touts offering tickets to “sexy shows” … and to table tennis demonstrations, I think, as there were also signs for ping pong shows.

This is what Bang La Road is like at night. In the daylight hours – before the vampires and vultures and hookers come out – it is a quiet and dusty and major thoroughfare.

Not far away is the Paradise Hotel complex – where the shoe is on the other foot, so to speak, as the bars and massage parlours and restaurants in the little side streets are filled with handsome young men offering a range of services … but not, usually, involving table tennis balls.

Rather like Goebbels in the old anti-Nazi WWII song: 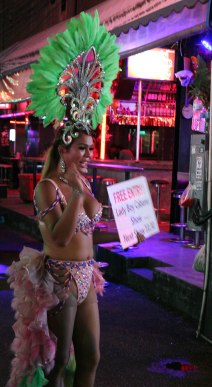 … but there are lots of wonderfully beautiful women lip-synching to songs from various musical shows or, paying tribute to the diverse members of the audience, songs from Korea, Russia and China.

The girls – well – men, really, but still beautifully long-legged, high-bosomed and beautifully painted and plumed – are covered in feathers and sequins in elaborate dresses and costumes, and belt out an hour or so of loud music, good choreography and colourful stage settings.

It is all great family fun done in the best of taste … so long as you ignore the basic premise … and the long line of ladyboy performers who gather outside the theatre at the end of the show to pose (for a fee) with gullible theatre-goers. 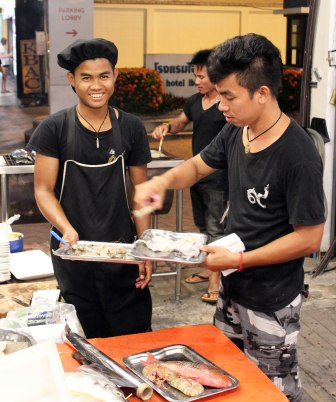 Chef and waiter with my fish dinner at a streetside restaurant

Eating in Phuket (no – there is no obvious link between ladyboys and haute cuisine) is excellent and ranges from the cheap street eats – I had a delicious Lebanese gyro from a street vendor one night – to top-end dining at places such as the Hilton (tremendous Sunday buffet brunch with masses of fresh seafood, free-flowing wines and a chocolate fountain) or The Boathouse Grill in a hotel built by Mom Tri – a well-known Thai entrepreneur who owns Prem Tinsulanonda International School in Chiang Mai, where I used to work.

As I sipped a glass of Pinot Grigio I heard a thumping crash from the road below, but could not see anything from the restaurant’s balcony. As I tackled the prawn pancake policemen’s whistles sounded, and the unsettling sounds of an ambulance siren were heard.

My waiter ran down to the roadside and came back

The waiter then mimed a bleeding “farang” with cuts and lacerations and broken bones in both arms as I finished off a glass of Chilean Merlot. One spare rib later sirens started up again as the ambulance sped back down the hill to Phuket Town.

Later that day I found myself in a deep wine cellar carved into the hillside above Mom Tri’s Villa Royal, where the same Pinot and Merlot were stacked on shelves and dismissed by Mom Tri as being just for wine-by-the-glass buyers (me!) while the REAL wines were stored further into the temperature-controlled cellar.

Mom Tri had phoned me shortly after I left his restaurant to invite me back to look at some of his art works. Not really a “Let me show you my etchings” invitation, but an invitation I was delighted to accept as I had already seen a few of his works and was keen to see others.

Mom Tri – full name Mom Luang Tridosyuth Devakul – is a descendant of Thailand’s King Rama IV and is something of a Renaissance man – rather like his relative, the late King Bhumibol Adulyadej, King Rama IX. Among many other things, Tri is a noted architect, restaurateur, designer, painter and sculptor. Several years ago I had assisted in the production of the exhibition catalogue for his solo exhibition “Bodies on the Beach” – large acrylic paintings of men and women on the beach in front of his Boathouse Hotel.

Although he has sold The Boathouse, he still owns many properties in Phuket and elsewhere, and his art is scattered through the various properties. At his house in Villas Grand Crus adjacent to the Wok Pagoda, his paintings and sculptures are mixed with works by other Thai and international artists, but at his Villa Royal Hotel (the building that has grown and evolved over the years from the simple three-roomed family house he designed and built forty years ago into the vast sprawling five-star hotel it is today) almost every work is his.

There are paintings, sculptures in bronze, wood or polymer and found objects: some of them are, like the house-cum-hotel, still evolving, as guests add bits of drift wood or broken sunglasses they have found on the beach to several works-in-progress.

Near the hotel is the VR Gallery that currently features rather unexciting works by an Australian artist, as well as several of Mom Tri’s sculptures. Other galleries in Phuket are geared more to the tourist trade, with mass-produced Bob Marley, elephant and pretty-temple-at-sunset paintings.

Been there, bought the T-shirt

A T-shirt for everyone

There are tailors – usually Indian – ready at the drop of a tape measure to whip up a new suit or two – though why anyone in Phuket would actually want a new suit is quite unknown. While Indians may corner the trade in tailoring, other nationalities put their fingers in the culinary smorgasbord with Indian, Egyptian, French, Italian, Lebanese, Chinese and many other types of restaurant. At the Expat Bar in Patong you can even buy genuine Australian meat pies.

It’s nice to know that Australia has made a significant contribution to world cuisine.

Food seems to have made an impact on me, my time on the island, and this blog, but I did do things other than eat. I think.

Yes – there were two sunny days spent by the pool at the lovely little Lemon Tree Naturist Resort about half an hour from my hotel, the morning jogs up and down Kata Beach and the morning puffs and pants back up the hill to the hotel, a lovely afternoon strolling through Phuket’s historic Old Town (soon to be listed, apparently, as a UNESCO world heritage site) and the several happy hours spent at various branches of the Royal Thai Immigration Department trying to get a small bit of paper stapled into my passport to prove I was still here – or there.

A bit funny that – two or three days later I was not there after all.

I returned to Chiang Mai, had one night at home, flew to Bangkok to meet up with some friends from Australia and I am now in Singapore … just one more island in the chain, but Leonardo diCaprio and the long-legged beauties of Phuket have yet to make an appearance …

4 thoughts on “To the Islands”