Brugge and Brussels: No Bats in these Belfries

No Bats in these Belfries

Last month I found myself in Belgium.

Having read one of my earlier travel stories, my nephew Court asked me how I found Zagreb. My rather feeble response was something like:

But Belgium? I do not drink beer. I do not eat vast quantities of chocolates, and I cannot remember when I last had a waffle topped with whipped cream, chocolate, crushed nuts and glacé cherries and candied mint leaves. I do have a bicycle and ride it around Chiang Mai in Thailand, but have never tried to pedal my way along western European picturesque canals or waterways.

So what was I doing in Belgium?

In 1980 I lived in a small town in Hampshire, England, and my parents came to spend some time with me. We later went on one of those crazy “Thirty Cities in Fifteen Seconds” tours that included, I think, Antwerp the diamond capital of the world; Luxemburg; somewhere in Holland and a scattering of other cities including Brussels. I trawled through all my travel photos and found that I had one – just one – photograph of our time in Belgium.

A photo of a bucket of snails

A bit of the old gratuitous violence, then?

So to me Belgium was snails and diamonds … until I happened upon a reference to the 2008 film In Bruges directed by Martin McDonagh and starring Colin Farrell, Brendan Gleeson and Ralph Fiennes. Scurrying to my Internet browser and possibly breaking all sorts of international laws and causing all sorts of copyright violations, I hunted for the film … found it … watched it and enjoyed it immensely. It is a very noir film, with impossibly obscene language, vast amounts of gratuitous violence, a twisted plot and some of the most charming and menacing characters in modern cinema. It is set in its entirety in Bruges, a wonderful small city west of Brussels.

Brughes has two names – Bruges (“brughez”) for the English and Brugge (“bruu-guh”) to the locals.

The film’s central characters debate the city’s worth while standing at the entry to the ancient tower and its belfry:

Despite Ray (Collin Farrell)’s negativity, Bruges is a beautiful old city and it did impress me – and the hordes of tourists who visit it every year.

The city is well-preserved to the point that any renovations or restorations are required to observe the city’s colour code for window trims and front doors – red and dark green are OK; lime green and lemon yellow are not. Forget pink! It has a surrounding canal and eight restored city guard gates, the lovely Jan van Eyck Square, imposing medieval architecture and the superb 13th century bell tower with its forty-seven-bell carillon ringing the changes some eighty metres – and 366 steps – above Markt Square. I did not climb all those steps, but enjoyed the bells and re-viewing the film and recognising the many locations used, and wandering aimlessly through beautiful parks, along canals, over bridges and back to my lovely little hotel the Bariseele, (http://www.bariseele.be) a short stroll from the canals, restaurants and public squares.

For reasons best understood by viewing the film, Ray climbed the UNESCO-listed bell tower and was followed by Ralph Fiennes … Ray took the short route down … but the bloodstains have long since been washed away.

However if blood really is your “thing” then a visit to the 12th Century Basilica of the Holy Blood is a must as it is reported to contain a sample of Jesus Christ’s blood, collected by Joseph of Arimathea. I am not a fan of Bram Stoker’s either, so I left the whole question of blood of any kind alone … and went on to admire the crowds eating the famous twice-fried Belgian frites.

Although we more frequently hear of French Fries, the clever Belgians in December 2014 applied to UNESCO to have their frites listed as one of mankind’s cultural treasures – along with the other 314 listed treasures such as Turkish coffee and Chinese calligraphy. I am not sure if Australia’s meat pies, mushy peas and Worcester sauce will ever get a similar listing. 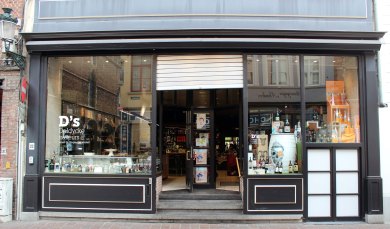 And if beer and gin are your favourite tipples, go no further than the many stores selling hundreds of types of beers and scores of types of gin. My favourite was D’s Deldycke Traiteur at Wollestraat 23, which had literally hundreds of different varieties of beer and gins and vodkas and schnapps. To provide a base for all this booze, D’s delicatessen section was mouth-watering enough to try some of their take-away grub and grog including a bottle of the superb Brouwerij Verhofstede Edelweiss gin that comes in numbered batches and bottles and is made locally.

I also had a great dinner without any frites one night at Tom’s Diner () – just a short but very convoluted stroll from my hotel … and even more convoluted walk back to the hotel after dinner. Benny, one of the two owners of my hotel, and who had recommended Tom’s, tried to persuade me to stay another day or two to explore the wider West Flanders region by bicycle or train but by then I had already decided to cross the border into French-speaking France after having spent time in French-speaking Brussels and Flemish-speaking Bruges.

There are – apparently – fifty-six UNESCO-listed belfries in Belgium and France. These and others have given us such wonderful expressions as:

But I saw not bats, nor squirrels nor owls in Brussels, Bruges … or Lille … which was my next destination. And which has its own superb belfry.

It is just a short train ride from Bruges to Lille, where my Airbnb host François was waiting for me on the footpath outside his wonderful apartment: an eclectic collection of 50s and African furniture, 30s architecture and contemporary refurbishments and remodelling. Unlike any Airbnb host I have met before, he had researched my Airbnb profile website and had prepared a host of recommended destinations for my time in Lille. 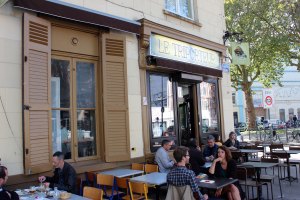 We sat in the sunny courtyard – with a hammock for those who want to loll about in the afternoon sun – and went through all the possibilities in Lille: the excellent Le Triporteur restaurant just over the road from the apartment in Bvd Victor Hugo, the handy little supermarket half a block away, the chaotic and fun Wazemmes market, the food fair at Gare Saint Saveur, and the attractions further afield at Villa Cavrois and Roubaix la Piscine.

Lille is a small city – and although there is excellent public transport, most of the time I just walked – past statues to Joan of Arc and Louis Pasteur (separate statues as I don’t think they met in real life), past theatres and opera houses, and to a park area where I thought Joan of Arc was still being burned, so terrible were the screams shattering the air.

Near the ancient Citadelle Vauban fortress (which still contains a very active military base and which still does not welcome strolling camera-laden tourists who innocently stroll over their drawbridges …) there is a large zoo which contains – apparently – boa constrictors, peacocks, numerous caged and free-roaming beasties … and gibbons, who were making all the noise. The YouTube video to be found at http://www.youtube.com/watch?v=FCkYzWUe7Jo looks as if it were made at this zoo and certainly gives an idea of the noise!

The old city of Lille is charming and contains – amongst other attractions – the place where Charles de Gaulle was born in 1890. It was closed when I called so did not have a chance to have a chat with the ghosts of the great man, and went on deeper into the old town where the lovely Rue de la Monnaie is full of students from the nearby Conservatoire, chatting, queuing to buy their lunches at whichever café was the flavour of the day, window shopping in shops whose goods are far beyond the pockets of students, and sprawled on the lawns and benches of various squares in the area. 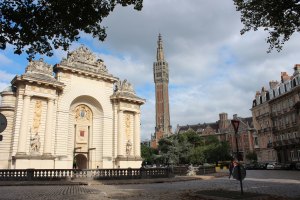 Down the road are the impressive Porte de Paris and the town hall, with its bell tower. Built in the 1920s, Lille’s tower is much younger than the Bruges tower or the most famous of all bell towers – the 12th Century Leaning Tower of Pisa – but it is much taller at 104 metres. Fortunately there is a life to take visitors to the top for spectacular 360-degree views over the city.

Travelling a bit further afield, and following the recommendations of my host, I found the lovely Villa Cavrois and an art gallery in a swimming pool.

Originally a family home, then seized by the occupying German forces, then abandoned and taken over by squatters and looters, and finally bought by the Centre des Monuments Nationaux and fully restored, it is an excellent example of modernist architecture where light fittings, heating grilles, furniture were all designed for this particular space. 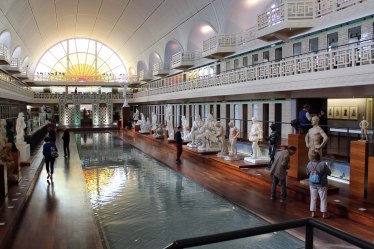 Another city tram takes travellers to the small town of Roubaix – in itself worth a visit – where the Roubaix – La Piscine gallery (http://www.roubaix-lapiscine.com) is located. The lovely art deco swimming pool from the 1930s served the local area for fifty or so years until is was closed for a variety of reasons but reopened after significant preservation and reconstruction works early 1990s as a museum of art and history. The central swimming pool is now only a few centimetres deep but the magnificent carved stone giant’s face is still spurting water into the pond.

Sculptures line the pool, the original cream-tiled shower- and foot-bath cubicles are still there, and art galleries are slotted into the upstairs areas and in other wings of the gallery. 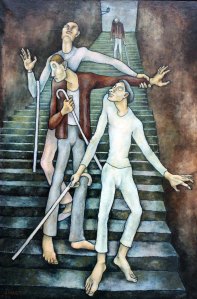 When I visited La Piscine there was a wonderful exhibition of Lyonnais artist Jean Martin (1911 – 1996) whose works I did not know before, but of whom I became an instant fan. His sad elongated figures seemed to be a little like some of el Greco’s works, although I have found that he is apparently slotted into the Belgian and German expressionist school. Great stuff.

There were about sixty German school kids there with their teachers on a school excursion – don’t know if they, too, thought it was great stuff, but they certainly sounded gibbon-like in their excited chatter, but perhaps they just had bats in their belfries or squirrels in their attics. 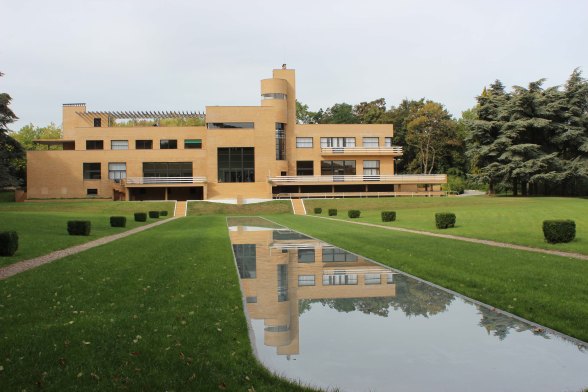 5 thoughts on “Brugge and Brussels: No Bats in these Belfries”