Sinatra sang about his kinda towns – Chicago and New York – and the song New York New York celebrates a place that was so good they named it twice. See http://www.youtube.com/watch?v=btFfXgUdIzY  and you’ll see what I mean.

In this song, the composer, Gerard Kenny, wrote the lines

I always knew that it would never happen to me, either.

It is interesting how, unlike NY NY, one country can create two quite different impressions on a traveller. One visit to the NW African hellhole of Morocco had me spitting in derision on its soil as I boarded the first plane out of the country, vowing never to return. Another visit saw me counting the minutes and trying to figure out how I could extend my already quite long stay in the charming, historic and welcoming kingdom, with its striking green star on a blood-red background.

When I wrote the last sentence I thought the green was an Islamic reference – but on a little digging find that the star actually represents the Hebrew king, Solomon. Perhaps this is why Morocco is, ultimately, such a fascinating place with its mixtures of cultures and traditions and a liberal form of Islam. My notes from my second visit remind me that dress for men and women varies from full head scarf or fez, just a face scarf, long robes and long gloves, to push-up bras, skin-tight jeans, shorts (men only), gelled or bleached hair and pierced ears.

My first visit to Morocco started after a night in Algeciras, Spain, in the cheap and quite nasty Hotel Anglo-Hispano, a hotel that no longer exists, but at that time the upstairs room’s plumbing sounded like a not so mini-Niagara every time the people there flushed the lavatory, and there were interesting stains dripping down my bedroom wall where perhaps … After an unpleasant and trying crossing on the ferry I eventually slumped into the port town of Tangier.

Despite the lack of sleep the previous night and the ferry ordeal, I was excited and looking forward to exploring a little of this new destination, my first footfall in the vast African continent. Livingstone – eat your heart out! I had selected the Hotel Mamora and I was not worried when arriving passengers were besieged by flocks of carrion crows – also known as hotel touts.

I swatted off most of them and set off at a goodly pace, knowing precisely where I was going. Or, rather, I knew the name of the hotel I had chosen, but had no idea at all where it was and had no city map and was really a bit of a nong, but I strode purposefully along the wharf and towards the city rather expecting that a divine hand would reach out of the sky with a flashing neon arrow pointing the way. 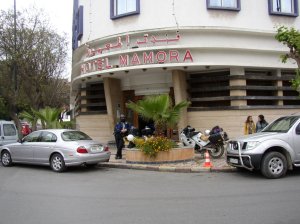 Well, there was no divine hand, but eventually a tiny hand did find its way into mine and a fresh-faced kid asked me where I was going. Perhaps foolishly, I told him.

I think had I mentioned ANY hotel in Morocco the kid would have said the same thing, but I allowed him to lead me to the right hotel – a place I doubt I’d ever have found on my own. I thanked him, gave him a small tip and said goodbye.

Come with me to the Kasbah

I hid in my room until I was sure the imp had gone – quite some time, and feeling even more of a nong: a grown man hiding in a hotel room to escape from a minor human pest. Finally I decided that it was indeed time for me to visit the Kasbah – or Medina – so I poked my nose outside my door. No boy. Good. Tiptoed downstairs and peered into lobby. No boy. Good. Took one step out front door and

Collapse of stout party … and I surrendered with, perhaps, a tiny bit of respect for the entrepreneurial spirit this mosquito was showing. We even managed to arrive at a price – say five dollars – that seemed suitable to us both and we set off around corners, up and down stairways, through shop-littered alleyways until we where … somewhere. I had no idea where we were, where the Kasbah was or where my hotel was – and still had no map. I was very like the babes in the woods – and at least as naïve as they – but I had not left a trail of crumbs so I could find my way out of the labyrinth.

Ah dear. My respect and my admiration for the flea evaporated and, flapping my hands at him as if he were an annoying gnat, chased him away, rather wishing that I had a swish or a flyswatter or something … and found a few moments later that I was actually just a block or two from the Marmora Hotel after all … so retreated to my room for a shower and a calming tisane and a little lie down until dinner time. 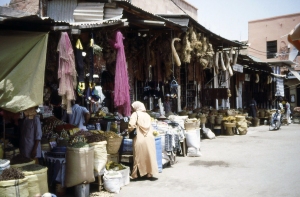 Armed with a map (aha! Intrepid traveller that I was!) I set out to find a place for a meal and cruised by the Kasbah – hah! – and found a place that offered a bottle of jolly good Moroccan Vieux Papes and a magnificent huge steak that I could not finish. By this time I knew Tangier intimately – like the back of my hand. Like my own hometown. Like the neighbourhood I grew up in with grandparents smiling at my playful attempts to skin the squirrels and eat the daisies. Maps? Pfah! Who needs them after a good meal?

I was in a narrow street that seemed to be getting narrower and darker, as every step headed in the opposite direction from the Marmora. Aha! Finally a smiling man loomed into sight and I figured I could use my best Arabic / French / English to ask for directions.

An Exchange of Pleasantries

The man was smiling because he had found his first idiot mark for the night.

I could see that the debate was not going to be an overly intellectual exchange of witty pleasantries so I dug into a pocket and drew out whatever coins I had left over after paying for dinner, and thrust these at my charming companion, who took them, sneered at them and at me (his lower lip actually did curl as they say in all the penny dreadful novels), threw my few coins on the ground and coughed up a great lump of phlegm which he spat in my face.

I turned, thanked him for the pleasure of his company, and hot-footed it out of the alley in case something sharper than his conversational wit or his spit was going to be introduced into the debate and somehow found and tumbled through the doors of the Marmora and into my room.

I don’t remember if I kissed the Spanish soil when I arrived in Madrid – but I was so glad to be there and Out of Africa. However, when later telling friends of my abhorrence of Morocco, they all assured me I should try it again. Ho ho ho. But the following day – just a mere twenty-one years later – I did go back and found a different country.

Everything is relative, I guess, and flying into Casablanca so many years later I found people to be helpful, friendly and smiling, and although I loved its medina with winding streets, covered alley ways, fish blood in the gutters, Moroccan CDs and cassettes, bread shops, colourfully-dressed water sellers (my notes ask “hepatitis vendors?”), an occasional beggar and occasional banks and hotels, I felt the huge city lacked any real charm, did not find Humphrey or Ingrid or Dooley or Rick’s Café, and was happy to board my train to Marrakesh. 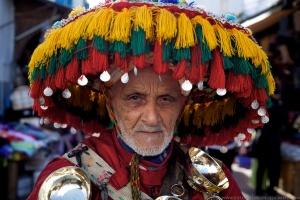 The three-hour journey was delightful, passing by prickly pears cultivated and planted as hedges and also in serried rows – the markets were full of the prickly pear fruit – and dusty little villages: clusters of red mud walls built on small hills, a few sheep and goats, a couple of donkeys – and satellite television dishes. In this part of the kingdom the countryside is not a sandy desert but rather rocky and inhospitable dusty regions with slums outside cities with beggars picking through mounds of garbage and where barbed-wire fences – and prickly pears – are “decorated” by hundreds and hundreds of wind-blown plastic bags hanging whole or tattered like vampire fruit.

The new city in Marrakesh has wide boulevards lined with rose bushes and orange trees – that were in full fruit when I visited – and the traffic is less insane than Casablanca’s. The huge walls – many kilometres of them – around the city’s medina, and the fifteen or so great gates, are about ten metres high so a camel-mounted attack would be quite difficult even today. Everything is pink – perhaps it is a case of – Yes – you can paint your walls any colour you like, so long as it is pink. And what was that about Mr Ford and his Model T car …?

Near one of the Marrakesh Medina gates are the tannery pits. 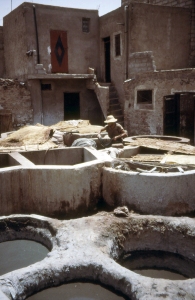 Naturally enough these were very noisome – and also very depressing. In these stone-hewn vats the workers were thigh- or hip-deep in the chemicals as the skins were being tanned, but perhaps those workers were better off – with a secure job – than those scavenging in the rubbish tips on the city outskirts. It is ironic and disturbing that travellers – including me –go there to see what is happening knowing that the centuries-old traditions are unlikely to change very soon, and that the workers will continue to suffer whatever. One writer has described them as the Pits of Hell. And rightly so. 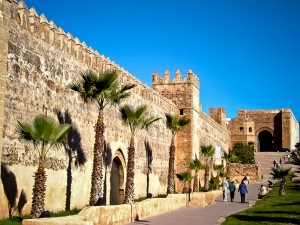 Another train took me to Rabat, the Kingdom’s capital, where, somehow, I found myself helping a fellow push his car along a road trying to get it to start. We struggled through great dry heat for a kilometre or so and I finally left him to it … only to see him breeze by a few moments later, tootling his horn and smiling at me … but not stopping to see if I would like him to stop and pick me up and take me to a place where a cool ale or soda or a calming G&T might be found …

Supermarkets do sell alcohol in this liberal Islamic country – but it is sold in plain black plastic bags so the infidels’ nasty habits do not corrupt the pure. Neither are the pure corrupted by photos of women.

While I was in Rabat the city was festooned with flags – bright red and green flags – celebrating the third anniversary as Mohammed VI’s coronation. Did not meet him during my visit but saw scores of royal portraits of HM the King … but none of HM the Queen. I asked a taxi driver if she was pretty and was told

Perhaps there was something lost in translation, although I have since found that she is indeed very pretty and also the first royal consort to be publicly acknowledged and to be given a royal title.  See her at https://www.youtube.com/watch?v=jqTLNkYu6Ak

Ceremonial avenues and royal portraits in Rabat … and spitting cursing street arabs in Tangier: yes, a country can indeed be two different places.