Some time ago I had a very pleasant week in Shanghai.

I had noticed a mosquito buzzing about on the plane when we took off from Bangkok … and wondered whether it survived to journey to China. Certainly the in-flight service could not have been better for the little fellow, with all those elbows and ankles to gnaw on for the reasonably short flight. I did not see him at the other end – but perhaps he got off with the first class passengers before the rest of us were invited to tackle the challenges of Immigration … or perhaps he was swatted: the dangers of international air travel exemplified!

For some reason, Shanghai has always been associated in my mind with places like Istanbul and Vienna – perhaps because of the air of mystery about these places. Vienna? A place of mystery? A place where Mozart was an early rock star? Yes – but also the dark and secretive place of Orson Wells’ The Third Man with its haunting melodies and chiaroscuro blacks and greys and not-so-many whites. Istanbul is more obvious – and because Shanghai was so far away, but so much a part of the French and British early colonial culture – it earned its place on my “International Man of Mystery” listing. I rather doubt, however, that most of this city’s 24 million inhabitants would think much of my romanticism.

Certainly not the couple of million of them who rode with me – and with the assistance of Traffic Assistants here and there – on the high-speed train from the airport into the city, accelerating from a dead stop to over 300 kmh in just under two minutes. I thought I’d been clever and bought little plastic chips which would be handy for other sightseeing journeys on the Metro … only to find out subsequently they were only of use on the day of purchase and only for the airport-city train.

While smoking is not allowed on the trains, it seems to be a National practice just about everywhere else. (See featured illustration from M50 Art galleries area) Street vendors have elaborate displays of the numerous brands on offer, there are cigarette shops packed with bad-teethed smokers, and whether playing mahjong or cards or throwing a new ceramic pot, it seemed compulsory to have a cigarette dangling from the bottom lip. I am not sure, but I think I have a vague recollection of a baby in a perambulator puffing pensively on a Pall Mall …

I knew that in a city this size and with only limited time available, I would have to focus my meandering – so anything East of the river or more than a few kilometres North or South of the Old Town – was left to the masses – washed or unwashed – and yes – there were a surprising number of beggars in the streets in most areas I visited.

The Bund, Old Town, the old French Concession and the old village of Qibao were enough to keep me foot weary for ten or so days.

Spending time in these areas – of course the most frequented places by local and international tourists – it was occasionally possible to forget the overwhelming size of the whole city, as with just a few Metro rides and an occasional taxi ride, there were ample areas where I was happy just to potter along. 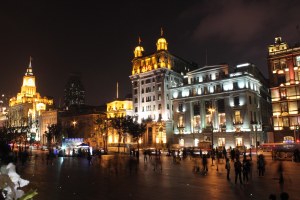 The Bund by night

The Bund by day and night – with garishly illuminated Pudong over the river – is a must and strolling along it was a pleasure. This was of course before the New Year’s Eve celebrations last year when 300,000 people had gathered to watch the fireworks but where a frightened and panic-driven stampede along the Bund ended in multiple deaths and even more injuries. Not on my time – the most deadly thing I saw was a young woman dressed Japanese Anime-style posing by the old Observatory. Otherwise, the old shops and churches and office buildings are attractive and all seem to be adorned by scarlet Chinese flags – lest one forgets who actually owns everything here nowadays.

On the hunt for art

I was also on a bit of an art treasure hunt as I had found there were lots of contemporary artists working in the city and that many former factories and even an old abattoir have become centres of this thriving art scene.

Ramps in the Old Millfun

The 1933 Old Milfun was a multi-story slaughterhouse in its prime eighty years ago. Terrified cattle used to driven up and down the deeply pitted concrete ramps to whichever death chamber or soup pot that had their names written on it. Today the same ramps are elegant swoops and loops of grey concrete linking art galleries, small shops and restaurants – some of which no doubt serving freshly carved beef steaks. One corner was a particularly delightful Dickensian London scene. With an almost-gas lantern hanging outside its bleak walls, and warmly glowing interiors behind heavy bars, the scene cried out for Tiny Tim to press his nose against the glass to discover what glories lay within – but out of his grasp. 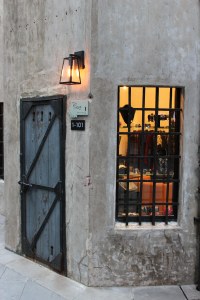 The M50 area – again a converted industrial estate – has scores of small galleries and ateliers and workshops turning out ceramics, screen prints, stencil art, oils and watercolours and sculptures and just about everything. It was a delight to wander and get lost and find a gallery I had visited before then notice there were steps leading up to other floors I had not discovered and then find new viewpoints out over the canals and then a few more galleries.

I have a friend in Chiang Mai whose name is “Ram”. I enjoyed the look on her face when I told her on my return, that I had visited RAM in Shanghai … but her namesake in China stands for the Rockbund Art Museum – a place spread over six or seven storeys of a 1933 building that used to house the Royal Asiatic Society – founded, I am told by its website, in 1823 by Sir Henry Thomas Colebrook. Its modern-day headquarters are just off Euston Square in London if you happen to be passing that way.

Sir Henry would have a minor touch of the vapours if he saw the modern art hanging in his former hang-out as part of the Hugo Boss Asia Art Award: an elaborate dinner table setting where everything was painted white and glued at odd angles to various surfaces, an old man in pyjamas hanging by his finger tips from a balcony, an endless-looping video of naked black man sunbaking, and a collection of ceiling lights mounted upside down on the floor. Honestly – I am not making any of this up. Or down.

Despite all the exciting contemporary art I saw, perhaps the most interesting from an historical view was the Propaganda Poster Art shop tucked away in the basement of a residential block off Huashan Road. It was full of original and reproductions of the Chinese Cultural Revolution posters so beloved by Mao-era politicians, industrialists and artists. Uncle Sam rated a few mentions – but it was Uncle Mao who certainly wanted YOU!

The Duke of Edinburgh is reputed to have been slightly politically incorrect (Yes! Strange!) when he said, “If it has four legs and is not a chair, has wings and is not an aeroplane, or swims and is not a submarine, the Cantonese will eat it.” Perhaps the same can be said about Shanghai citizens, whose markets are full of submarines, aeroplanes and chairs of all sorts. There is also a pet market – where presumably the things on sale are not meant for the wok – or at least not initially meant for the wok – where you can buy puppies and cicadas and tortoises and birds and gold fish and giant walnut shell strings of beads.

I did not buy any aeroplanes or cicadas but I saw lots of people loading up at a street vendor selling what I later found were called Jiang Bing – and were delicious: a sort of pancake stuffed with various bits and pieces and eaten when on the trot to the next gallery – or between quick puffs of a cigarette during a break from office routines.

Eating at Qibao – about half an hour on the Metro from downtown – is also a delight. Lining the alleys and tempting the shoulder-shoulder tourist crowds are huge vats filled with assorted cuts of deceased pig being barbecued, piles of “thousand-year-eggs”, sausages of all shapes, sizes and colours, and then there are the noodle shops, full of people with queues of more hungry souls waiting to get in to demolish steaming bowls of dumplings, talking at the top of their voices as they do, shoving more food in while they do … and spitting onto the table top or floor the bits that even the Duke of Edinburgh might have rejected. Fine dining it ain’t.

A more refained air is to be found a long way from Qibao in the Yong Foo Elite, a lovely 1930s private residence in the former French Concession that now offers elegant afternoon teas and dinners in a house and garden scattered with antiques. The French Concession is – in relative terms – a quiet, grassy, tree-lined area of old colonial buildings, restaurants, bars, private houses and dress shops. It complements nicely areas of the Old Town that are more densely populated, filled with markets and shop houses whose merchandise spills gaily onto the footpaths and where washing still hangs from bamboo poles shoved into sockets on balconies. It is a long way from Wukang Road to Jiulong Road – not so much geographically, although the two roads are separated by the gaudy neon-lit delights of East Nanjing Street – as in cultural and historical terms.

East Nanjing is everyone’s “go to” street for shopping and dining and there are luxury shops and restaurants and street performers and helium-filled balloons and restaurants and chic clothing shops and neon signs and hordes of people. Just one block away, however, is East Beijing Road. Not a neon light in sight – but if you are looking for electrical or hydraulic switches, router bits, pliers, springs or wire brushes, then THIS is where you must go. Somehow I always find myself walking – whichever city I am in – along a street of electrical or car parts or bicycle repair shops. Must be a special knack I have.

I also always find temples and cemeteries. Ah well – perhaps I too want to be an Immortal. This time I found the Chenxiangge Nunnery and assorted other religious places – but none of them was quite as exciting as the Shanghai Urban Planning Exhibition Hall. True. Its vast diorama of the city, the delightful historical drawings of street scenes, the interactive displays really made this a great place to potter for a few hours. 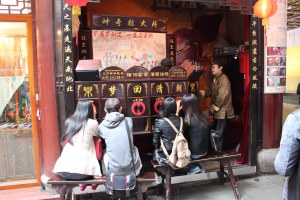 I did enjoy my time in Shanghai and part of this came from the apparent joie de vivre – ah – the old French influence again, perhaps – that was everywhere. Yes – cigarettes were everywhere, but people seemed to be having fun with Michael Jackson tunes belting out for the Tai Chi class, exclamations of great horror and dread at least good enough for a major natural disaster being expressed over a game of cards or chess, a well-populated oldies’ Community Orchestra and Choir hall, young people giggling excitedly at an old-fashioned peep show, and so many smiles everywhere. Perhaps this is not what we often associate with the bustle and push and shove of China – but it made my few days in this corner of the vast country memorable. 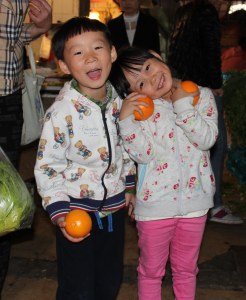