About twelve months ago I found myself in Genoa.

With apologies to Fred Ebb, the Chicago librettist, who wrote: 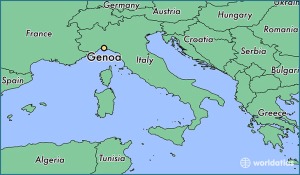 Genoa – or Genova in Italian – is a city located about halfway between Venice and Barcelona if you travel by train from one side of Italy to the other and then on to Spain. It is Italy’s largest port and the birthplace of Christopher Columbus who famously sailed the oceans blue in 1492, and of Niccolò Paganini, who was born almost three hundred years later. If you’d like some atmospheric music while you read this story, copy the link below, paste it into your browser, hit PLAY, and read on …

My grand Grand Canal hotel in Venice was just a dim memory as I checked into the three-star Alexander Hotel in Via Bersaglieri d’Italia. Mr Google Translate tells me this street name means “Italian Sharpshooters Street” so I kept my eyes out for snipers, men in snap-brim fedoras and other unlikely characters with violin cases as I took the short walk from the stazione ferroviaria di Genove Principe – or Central Station as we say in English.

The hotel and the station were under the shadow of the Albertis Castle had the sun been shining that way that day. It was a no-frills place – station as well as hotel – with no breakfast, almost microscopic tiny squares of rock-solid bath soap in impenetrable plastic packets, a dusty wardrobe with four lonely little wire coat hangers and a well-stocked refrigerator that was noticeable by its absence.

Outside my room were some beautiful plane trees whose glossy leaves were lit throughout the night by a large neon HOTEL sign slung by my window. The bottom stroke of the “L” fizzed and sputtered and did not light up. Tarantino could not have scripted a better place for a shoot-out with those sharpshooters.

One night a bell rang. No – not my mobile phone. Checked the laptop. Checked the Kindle. Finally traced it to the room phone … and feared the shooters had found me after all.

It might have been a coded password message asking if the money was ready for collection, or if the Uzis were fully-loaded or if the coast was clear for a lover to return to the room … but nothing happened, Mario did not turn up, no gunslingers broke down the door … and I went back to reading and swatting mosquitoes swarming in from the plane trees.

The night was punctuated by a seemingly endless procession of strident sirens and red-and-blue-flashing ambulances and police cars. The sharpshooters were obviously about somewhere that night. 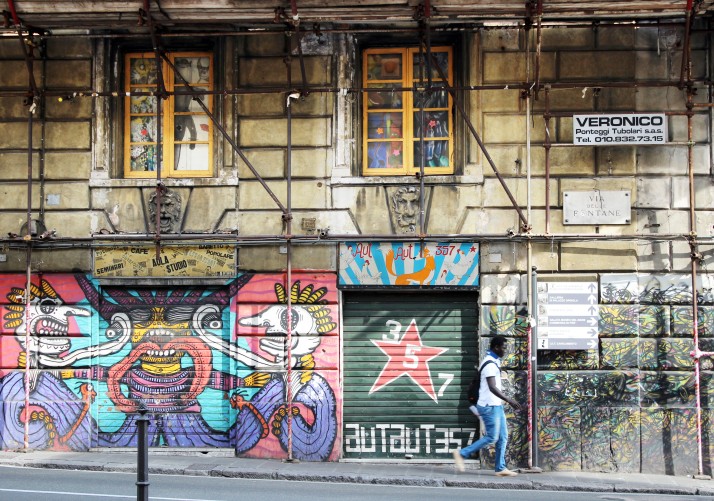 A morning stroll along the heavily graffitied Piazza della Commenda to Vie di Pré showed that for every three people on those mean streets two were Africans (from Morocco or Sudan) and of the others about half were Pakistanis or Indians. Paganini and the Pope did not get much of a look in.

I found two skinny black-and-white-clad and black-and-white-name-tagged and very white-skinned Mormons walking through the streets – looking rather frightened as their faces (and mine) were the only white faces to be seen. Black baristas poured huge arcs of very black coffee backwards and forwards between tiny plastic cups to cool it down and totally ignored the three whities. 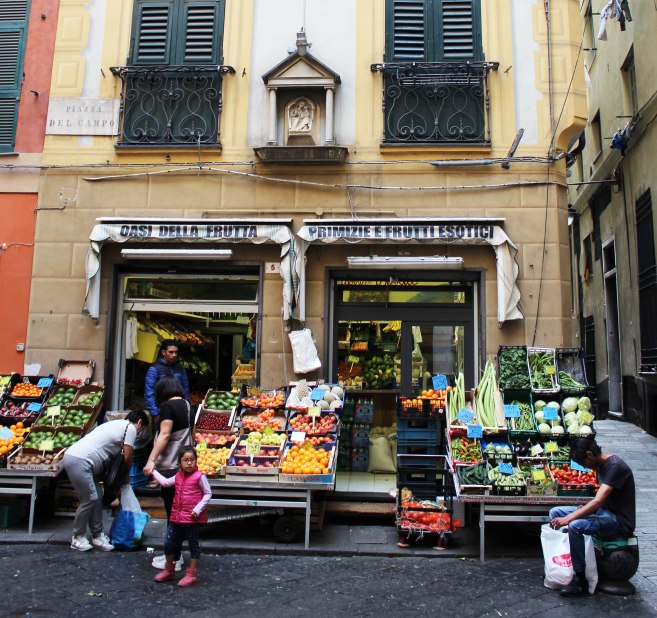 It was a vibrant, exciting, colourful walk … in a neighbourhood that could have been anywhere but Italy.

But carry on along Vie di Pré to Via del Campo and then get lost in the myriad little streets and clamber up and down many staircases and perhaps turn into Passo delle Murette, scurry through Porta Soprana and you find yourself in seventeenth or eighteenth century Italy as you enter the splendid Plaza Raffaele de Ferrari – which ironically has banned all cars – Ferraris or otherwise.The Plaza has a large and glorious fountain – but it was being covered with steel and timber scaffolding and decking when I was there, as Il Papa, Pope Francis, was due in a day or two, and I think he was going to do a stand-up comedy routine or something in the Plaza … or perhaps celebrate mass … but I am not sure why he would do any of these things on a temporary stage built on top of a fountain as the cathedral is just a tossed rigatoni or two away from the Plaza. In any case, his visit to Genoa last year – exactly one year ago today, was exactly 177 years after Paganini’s death.

When I was there, kids were blowing bubbles, dreadlocked black-footed jugglers were giving each other foot massages, mamas and papas were watching grandchildren, and I was wondering where I could find lunch.

Just off the plaza is the Palazzo Ducal with its superb and immensely tall doors (See featured image, left)  ready to welcome Hannibal and his elephant should he wish to come in. I headed along Via XXV Aprille to Via Garibaldi with all its little palazzi – Palazzo Podestà, Palazzo Rosso, Palazzo Biànco, Palazzo de Génova – and I wanted to find a black palace or a red palace among all these pretentious sixteenth and seventeenth century townhouses … all of which are part of this wonderful UNESCO World Heritage site.

But I did find violins, restaurants and a place for lunch.

The Trattoria dell Acciughetta (http://www.acciughetta.it/) is a goodly walk from all the palazzi, past the cavernous side streets lit with neon hotel and restaurant signs, but only five minutes from Central Station (OK: La Stazione Ferroviaria di Genova Principe – how these Italians DO go on!) and about the same distance from my hotel. I ate there a couple of times and immensely enjoyed the food and the wine and the passing caravanserai.

Just over the road is the old port area – still a very active leisure cruiser harbour, with luxury motorboats and yachts from Ireland, Malta, Bahamas and the Isle of Wight. There are ships’ chandlers, converted cotton warehouses, restaurants, bars and ice cream shops. There was a “Slow Food Festival” happening on the wharf, with salted cod from Norway, olives, olive oil, olive oil soap, “Mother-sucking good oysters” and all sorts of cheese, fresh fish and seafood: I had some rather forgettable fish fillets as I walked on to the Museo Luzzati.

Yes, Rembrandt and Constable were great artists, and perhaps they also created “cartoons”. Even da Vinci found fame with a cartoon – the so-called Burlington House Cartoon of The Virgin and Child with St Anne and St John the Baptist – but I am not sure if any Dick Tracey or Charlie Brown drawings will ever hang in London’s National Portrait Gallery … but every dog has its day … and Dylan Dog had his day in the Museo Luzzati.

Perhaps with more time I could have found other things about this town to recommend it, and I did enjoy my short visit, but without Mario or a single sharpshooter to cheer me up it was time to go back to the trains and head for Barcelona.